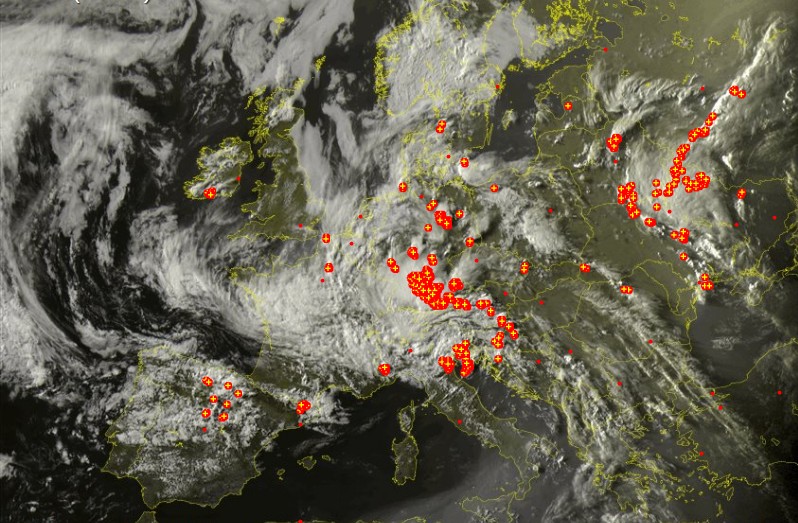 A low pressure center is covering a large swathe of Europe producing heavy rain and severe electrical storms since Saturday, May 28, 2016. At least 2 people were killed and more than 35 injured on Saturday alone. The severe weather is expected to move over to the UK on Monday, May 30, and last at least until May 31.

A bolt of lightning that, according to witnesses, appeared from a cloudless sky hit the pitch at the end of a children's football match in Hoppstaedten, western Germany. Police said 35 people were taken to a hospital. Of them, 30 were children, ages 9 to 11, who suffered minor injuries and three adults with serious injuries. A referee was directly hit by the lightning and suffered cardiac arrest. He was revived by witnesses and a doctor before being rushed to the hospital by helicopter. Two more adults suffered minor injuries.

Lightning bolts that appear from cloudless skies are formed atop of a thunderhead and carry a positive charge, as opposed to the 'regular' lightning that carries a negative electrical charge and is released from the base of a thunderstorm cloud. Such lightning is called a "positive giant" and a “bolt from the blue.” This is an extremely dangerous type of lightning as it can carry more than 10 times the electrical current of a regular bolt, last more than 10 times longer and move horizontally, often up to 40 km (25 miles) away from the source. There are reports of such bolts traveling as far as 80 km (50 miles) from the cloud that produced it.

In southwest Poland, a hiker descending a mountain was killed by a bolt of lightning. On the same day, and in the same region, a 61-year-old man drowned in flash flooding.

In northwest Paris, France, the same weather system produced a bolt of lightning that hit children's birthday party injuring 8 children, ages 7 to 14, and 3 adults. According to The Associated Press, the victims sought shelter under a tree at Parc Monceau. Six of them were seriously injured, including four children and two adults. Thanks to Commander Pascal Gremillet, an off-duty firefighter visiting a nearby museum, the victims received first aid within a few minutes after the strike. “I saw them on the ground beside a tree. There was a child in cardiac arrest, so I gave first aid and heart massage,” said Gremillet. “Without his actions, it would have been much worse,” a spokesman for Paris' fire service said.

Storm alerts had been issued for several regions across southern France on Saturday, but Paris, to the north, was not on the list, AFP said.

Widespread thunderstorm clusters were present across Europe on Sunday, May 29, and are expected to last at least until Tuesday, May 31.

Featured image: A visible image of Europe with lightning clusters at 20:10 UTC on May 29, 2016. Credit: EUMETSAT