Astronomers have discovered unique and unusual features within the dusty disc of the AU Microscopii star on images from the NASA/ESA Hubble Space Telescope and ESO's Very Large Telescope. Curious features are moving with an unusually fast speed, and are unlike anything discovered so far. Their origin presents a new challenge for the astronomers.

AU Microscopii (AU Mic) is a young star, located only 32 light years away from Earth and surrounded by a large disc of dust. The astronomers have been searching the star's disc for signs of clumpy or warped features that would indicate the location of possible planets, for a couple of years. Finally, in 2014 they detected an unusual feature within the disk by using the high-contrast imaging capabilities of newly installed SPHERE instrument, mounted on the Very Large Telescope.

"Our observations have shown something unexpected. The images from SPHERE show a set of unexplained features in the disc which have an arch-like, or wave-like, structure, unlike anything that has ever been observed before", said Anthony Boccaletti of the Observatoire de Paris, France. 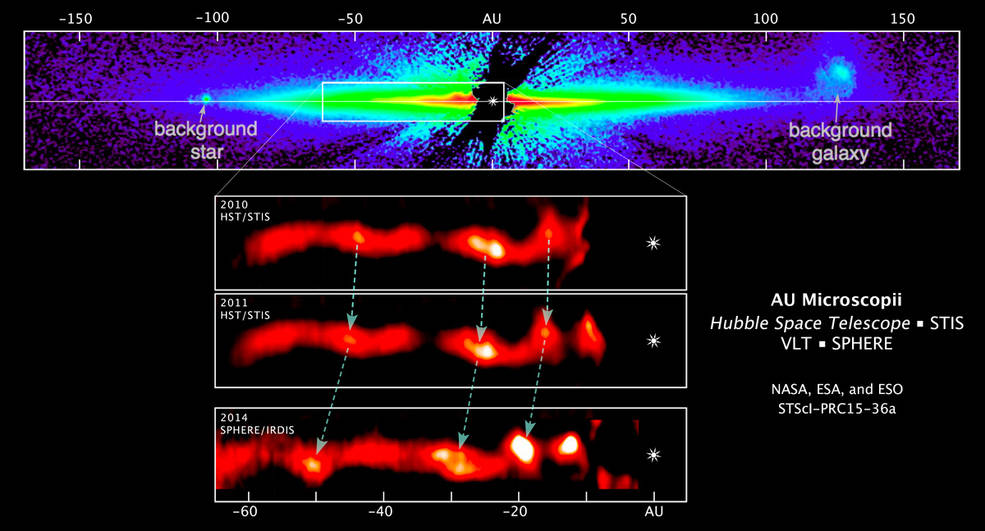 A 40 billion-mile diameter edge-on disk encircling the young star AU Microscopii reveals a string of mysterious wave-like features. Astronomers discovered the ripples are moving across the disk at speed of 35 405.6 km/h (22 000 mph). The cause of the phenomenon is unknown and never-before seen in stellar gas and dust disks. Image credit: NASA/ESA/ESO/A. Boccaletti (Paris Observatory)

The observed images show five wave-like arches, similar to ripples in water, at different distances from the star. The research team has compared the newest images with images of the disc taken by Hubble in 2010 and 2011, however they found no similar feature on the earlier images.

This video clip takes the viewer from a broad view of the entire southern Milky Way into a closeup of the nearby star AU Microscopii. Video credit:  ESO/NASA/ESA

The strange features are moving on a very fast pace, and it appears that those further away from the star are moving faster than those closer to it.

"We reprocessed images from the Hubble data and ended up with enough information to track the movement of these strange features over a four-year period. By doing this, we found that the arches are racing away from the star at speeds of up to about 40 000 km/h (24 854.85 mph)," Christian Thalmann from ETH Zürich in Switzerland explained. 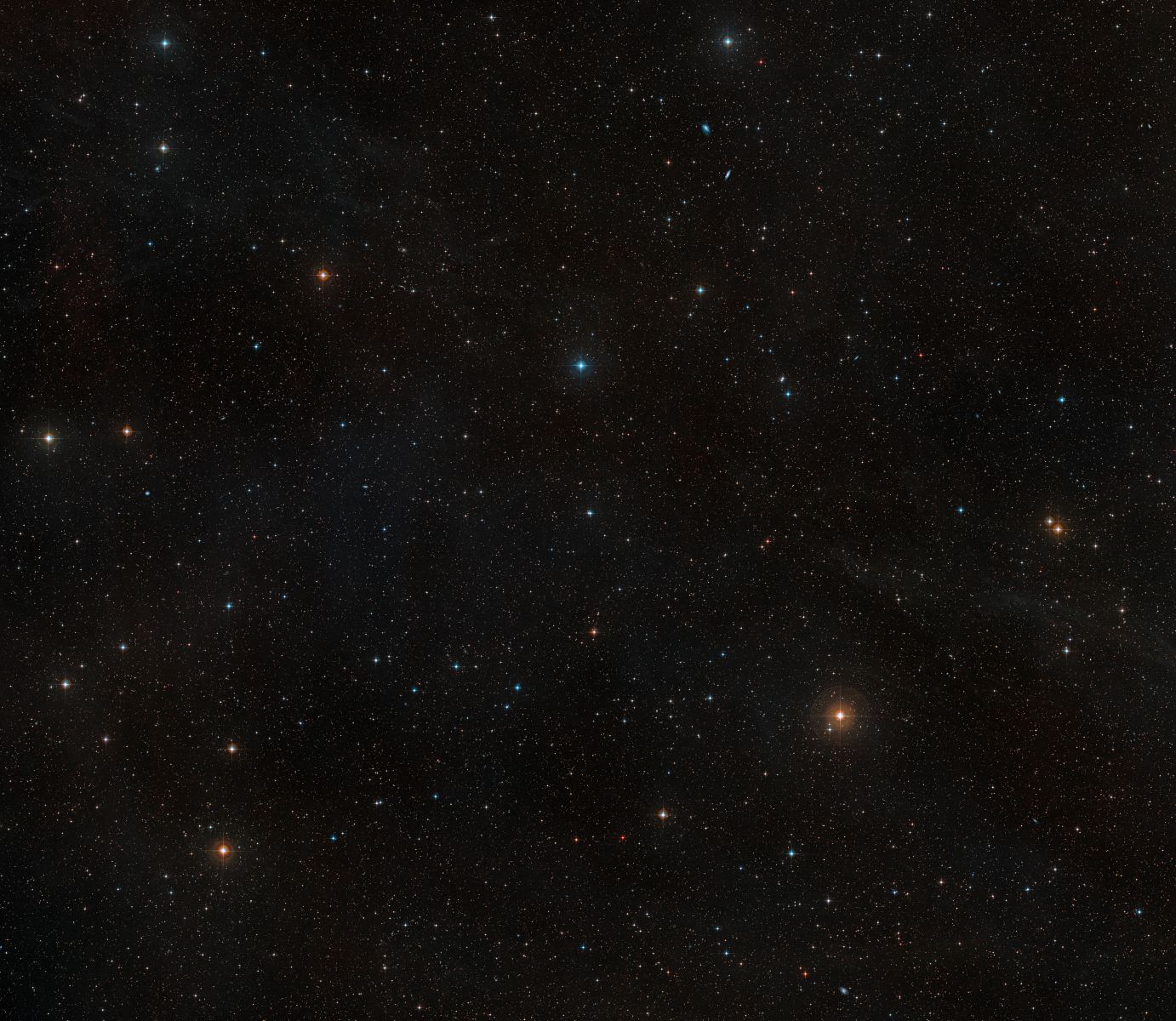 The sky around the nearby young star AU Microscopii. It was created from images forming part of the Digitized Sky Survey 2. AU Mic appears just below the centre of the image as an orangish star of moderate brightness. Because the photographs through different coloured filters that were used to make this picture were taken many years apart, AU Mic appears double, as the star’s own proper motion has moved it a small distance across the sky in the intervening time. Image credit: ESO/Digitized Sky Survey 2.

Three of the features are moving so fast that they seem as if escaping from the gravitational attraction of the star. Due to their high motion speed, the observed disc features are most likely not caused by the conventional objects such as planets distributing material in the disc, while orbiting the star. Scientist have concluded that something else must have been involved to speed up the ripples and make them move at such a fast face, which means these features are a sign of something truly unusual.

"Everything about this find was pretty surprising! And because nothing like this has been observed or predicted in theory we can only hypothesise when it comes to what we are seeing and how it came about," stated co-author Carol Grady of Eureka Scientific, USA. 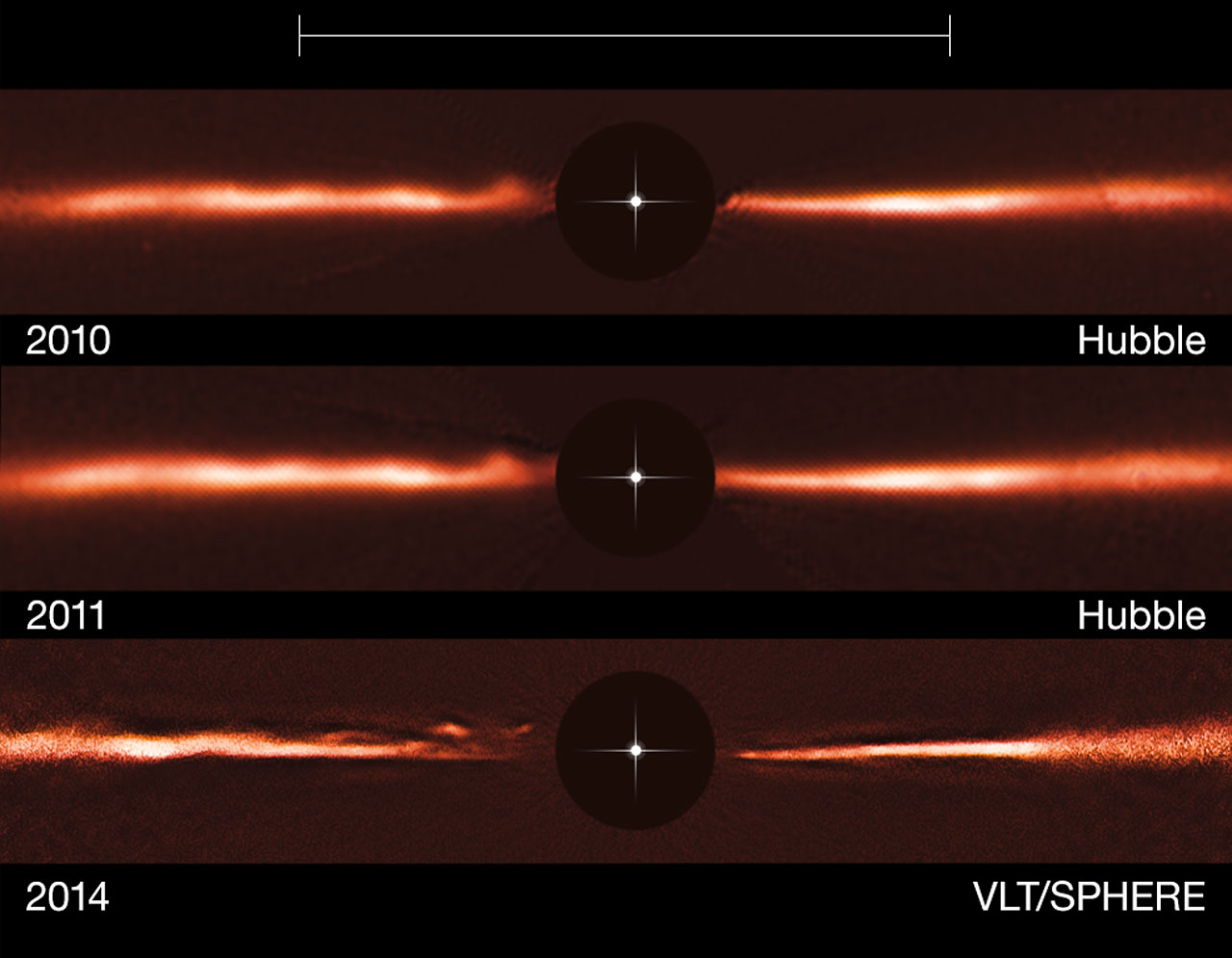 The top row shows a Hubble image of the AU Mic disc from 2010, the middle row Hubble from 2011 and the bottom row is an image taken with the SPHERE instrument, mounted on the Very Large Telescope, from 2014. The black central circles show where the brilliant light of the central star has been blocked off to reveal the much fainter disc, and the position of the star is indicated schematically. Image credit: ESO/NASA/ESA

The observation of the curious features is being published in the Nature journal on October 8, 2015. So far, scientists can only guess what phenomena has caused these unusual ripples around the star.

"One explanation for the strange structure links them to the star's flares. AU Mic is a star with high flaring activity – it often lets off huge and sudden bursts of energy from on or near its surface. One of these flares could perhaps have triggered something on one of the planets – if there are planets – like a violent stripping of material which could now be propagating through the disc, propelled by the flare's force," Glenn Schneider of Steward Observatory, USA, said.

The research team will continue to study the star system in the future, and put their efforts into understanding the cause behind the unusual phenomena.