Lori Glaze of NASA's Goddard Space Flight Center in Greenbelt, Maryland and her team developed a computer model to calculate whether the plume of ash and gas above a large fire-fountain volcano could have reached stratosphere to alter the climate and the result was positive.

In June 1991, Mount Pinatubo in the Philippines exploded, blasting millions of tons of ash and gas over 32 km (20 miles high) – deep into the stratosphere. Certain gases in the massive plume from this volcano acted like a sunshield by scattering some of the Sun's light, preventing it from reaching the surface and causing average surface temperatures to drop worldwide by an estimated 0.5 degrees Celsius (0.9 degrees Fahrenheit).

Flood-basalt volcanic eruptions don't explode as dramatically, but they dwarf previous examples with much bigger volumes of gas and lava erupted. "With eruptions like Pinatubo, you get one shot of sulfur dioxide and other gases into the stratosphere, but then the volcano is quiet for hundreds or thousands of years," said Glaze. "With a flood-basalt eruption, you're repeatedly ejecting these chemicals into the atmosphere over tens, hundreds, or maybe even thousands of years. Each eruption itself may not be the biggest thing you've ever seen, but you're continuously supplying gas to the atmosphere over a long period time."

One eruption of the Columbia River basalt formation, the Roza eruption, took place about 14.7 million years ago and produced about 1 300 cubic kilometers (over 300 cubic miles) of lava over an estimated period of ten to fifteen years. Glaze and her team have been focusing on this particular eruption.

The molten rock (magma) in flood-basalt eruptions flowed easily. This allowed gas that was trapped in it to be released easily as well. This magma produces "fire-fountain" eruptions – a fountain of lava rising hundreds of meters into the air. 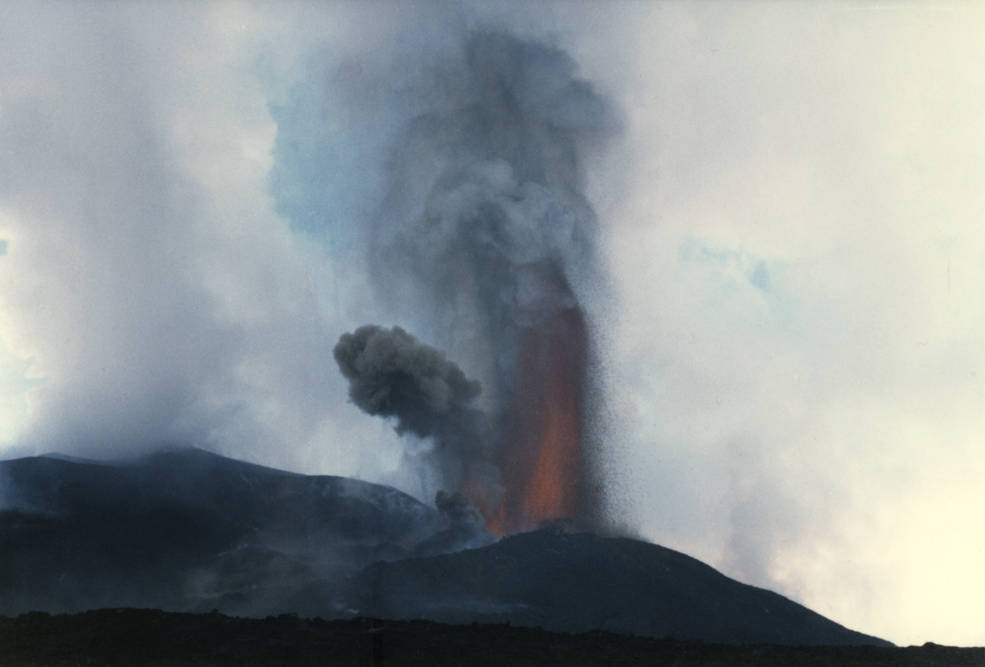 A small fire fountain eruption during the 1989 eruption of Mount Etna, Italy. A plume of fragmented ash and gas rises buoyantly above the red hot lava in the fountain. Credit: Lori Glaze.

The boundary between the unstable lower atmosphere (troposphere) and the stable stratosphere is called the tropopause. Because warmer air expands more and rises higher than cooler air, the tropopause is highest over the equator and gradually becomes lower until it reaches its minimum height over the poles. Thus a fire-fountain plume from a volcano at high latitudes near the polar-regions has a better chance of reaching the stratosphere than one from a volcano near the equator.

Glaze and her team applied a computer model they developed to calculate how high volcanic plumes rise. "This is the first time a model like this has been used to calculate whether the plume of ash and gas above a large fire-fountain volcano like the Roza eruption could reach the stratosphere at the time and location of the event," said Glaze. The team verified their model by applying it to the 1986 Izu-Oshima eruption, a well-documented eruption in Japan that produced spectacular fire fountains 1.6 kilometers (almost a mile) high.

Her team estimated the tropopause height given the eruption's latitude (about 45 degrees North) and the contents of the atmosphere at the time of the eruption and found that the eruption could have reached the stratosphere.

"Assuming five-kilometer-long (3.1 mile-long) active fissure segments, the approximately 180 kilometers (about 112 miles) of known Roza fissure length could have supported about 36 explosive events or phases over a period of maybe ten to fifteen years, each with a duration of three to four days," said Glaze. "Each segment could inject as much as 62 million metric tons per day of sulfur dioxide into the stratosphere while actively fountaining, the equivalent of about three Pinatubo eruptions per day."

Despite what the research suggests, Glaze thinks that scientists still have to search for evidence of a climate change around the time of the eruption, perhaps an extinction event in the fossil record, or indications of changes in atmospheric chemistry or sea levels.

Glaze is lead author of a paper on this research published August 6 in the journal Earth and Planetary Science Letters.

Featured image: This is a plume of ash from the Sarychev volcano in the Kuril islands, northeast of Japan. The picture was taken from the International Space Station during the early stage of the volcano's eruption on June 12, 2009. Credits: NASA