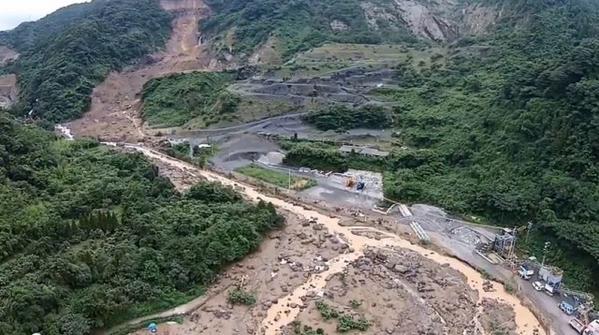 Heavy rainfall which affected the southwest Japan are thought to have triggered a number of landslide events in the month of July. The third in a row landslide happened on July 28, 2015, in the Kagoshima Prefecture, forcing the residents of the nearby Tarumizu town to run for the their lives, as the whole chunks of a mountain broke off and came rushing down. No injuries or fatalities were reported.

The massive landslide was caught on the footage showing the whole event, including the collapse of a rock, initial sliding, landslide fragmentation throughout the downstream flow and the final arrival of rock and mud debris creating a plume of sediment in the bay.

The area nearby, as well as the site of the landslide, have been affected by quarrying, and there is a possibility that this work has left the slopes excessively steep. The heavy rains affecting the area for the last few weeks, have probably triggered the landslide event.

A drone footage showing an overview of the landslide site prior to the latest landslide event is shown below.