Seismic waves are helping scientists to plumb the world’s deepest mystery: the planet’s inner core.Thanks to a novel application of earthquake-reading technology, a research team at the University of Illinois and colleagues at Nanjing University in China have found that the Earth’s inner core has an inner core of its own, which has surprising properties that could reveal information about our planet.

Led by Xiaodong Song, a professor of geology at the U. of I., and visiting postdoctoral researcher Tao Wang, the team published its work in the journal Nature Geoscience on February 9, 2015.

“Even though the inner core is small – smaller than the Moon – it has some really interesting features,” said Song. “It may tell us about how our planet formed, its history, and other dynamic processes of the Earth. It shapes our understanding of what’s going on deep inside the Earth.”

“It turns out the coherent signal enhanced by the technology is clearer than the ring itself,” said Song. “The basic idea of the method has been around for a while, and people have used it for other kinds of studies near the surface. But we are looking all the way through the center of the earth.”

Looking through the core revealed a surprise at the center of the planet – though not of the type envisioned by novelist Jules Verne. 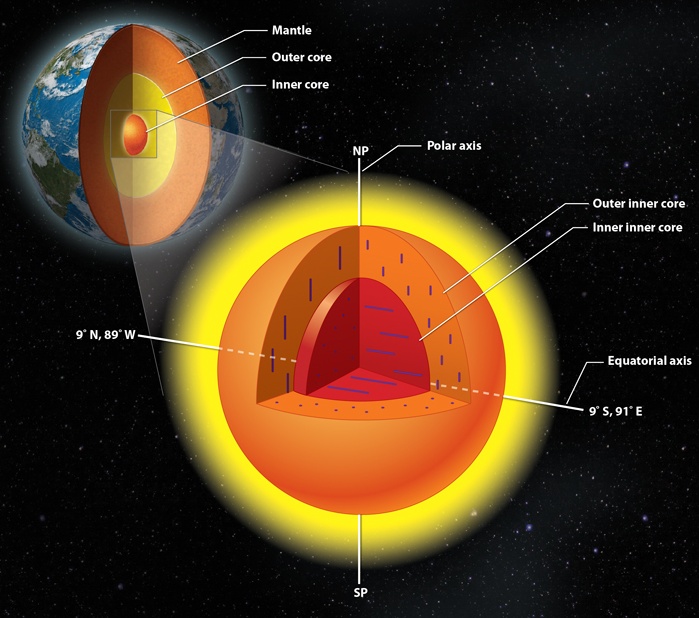 The Earth’s inner core has an inner core of its own, with crystals aligned in a different direction. Photo courtesy Lachina Publishing Services.

“The fact that we have two regions that are distinctly different may tell us something about how the inner core has been evolving,” Song said. “For example, over the history of the earth, the inner core might have had a very dramatic change in its deformation regime. It might hold the key to how the planet has evolved. We are right in the center – literally, the center of the Earth.”