Greater Kashmir writes: "With the Government of India maintaining silence over the imminent eco-disaster in Kargil due to the blockage of Phutkal river, environmentalists have warned that delay in addressing the issue can cause “catastrophic flashfloods” in downstream areas of the Zanskar Valley."

“The accumulated water can burst anytime and cause destruction of life and property in Zanskar and its low-lying areas. There has been no response from the Ministry of Home Affairs so far,” member Parliament from Ladakh, Thupstan Chhewang told Greater Kashmir last week.

Prof. Shakil A Romshoo, head of the Earth Sciences department at Kashmir University, also warned that damming of water-course can result in destructive flashfloods in downstream habitations of the river.

As of January 20, 2015, that dam was about 600 meters (2 000 feet) long, according to an analysis of satellite imagery collected by the Indian Space Research Organization’s CartoSat-2. The artificial lake that formed behind the dam was nearly 8 kilometers (5 miles) long and covered about 55 hectares (300 acres).

The Operational Land Imager (OLI) on Landsat 8 acquired this image of landslide debris and the barrier lake on January 18, 2015. An image of the same area on December 4, 2014, is shown for comparison. 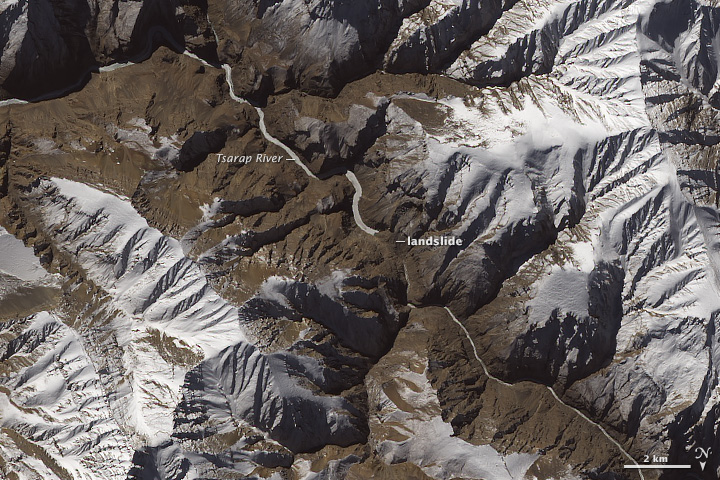 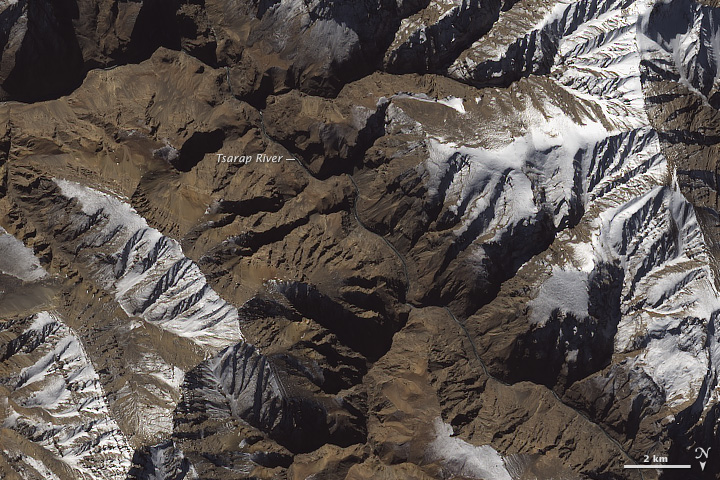 Notice that the river appears wider upstream of the landslide. The river also appears brighter after the landslide because the surface has frozen and a fresh coat of snow coats the ice. Note that the images have been rotated to minimize relief inversion, an optical illusion that can make it difficult to tell the difference between valleys and ridges.

After surveying the situation on January 18, a team of civilian and military engineers recommended that people who live downstream move to higher ground, NASA's Earth Observatory writes. They also discouraged authorities from using explosives to clear the blockage as doing so could trigger additional landslides.

While the chance of a catastrophic flood is lower with the lake frozen, the risk will increase when temperatures rise in the spring. As a precautionary measure, authorities have closed the Chadar ice trek, a popular route that involves hiking on frozen river ice downstream of the blockage.

“It is hard to know how serious the hazard is given the available information,” noted University of East Anglia geologist David Petley on his blog. “On the face of it, the size of the barrier, the length of the lake, the narrow dam crest, and the possibly weak materials would suggest that it is potentially quite risky. But that will depend on the location of people and assets downstream and the nature of the materials that form the dam. The first step must be to put a monitoring system on the dam.”

"Disaster Looms Over Ladakh, But Is Anybody Listening?" by Jaskirat S Bawa