Penn State University astronomers are among the scientists of the Sloan Digital Sky Survey (SDSS) who this week are releasing to the public a massive collection of new information about the universe. "This set of observations is one of the largest astronomical databases ever assembled," remarked Donald Schneider, Distinguished Professor of Astronomy and Astrophysics at Penn State.

"The more than 70 Terabytes we collected during the third epoch of this survey, SDSS-III, contain information on nearly half-a-billion stars and galaxies, including three-dimensional cosmic structures that formed billions of years before the Sun began to shine," Schneider said. "This data release will undoubtedly form the basis for many future scientific investigations." Schneider is the SDSS-III survey coordinator and the project's scientific publication coordinator.

"The most astonishing feature of the SDSS is the breadth of groundbreaking research it enables," said SDSS-III Director Daniel Eisenstein of the Harvard-Smithsonian Center for Astrophysics. "We've searched nearby stars for planets, probed the history of our Milky Way, and measured nine billion years of our universe's accelerated expansion. Our data also provide the first direct probe of the expansion rate of the universe ten billion years ago." 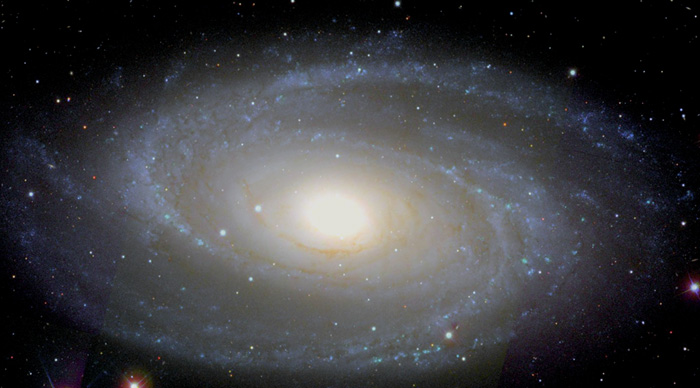 Niel Brandt, Penn State's Verne M. Willaman Professor of Astronomy and Astrophysics, is the SDSS-III leader of a number of projects investigating the properties of quasars, which are supermassive black holes that are devouring enormous amounts of matter, releasing amazing amounts energy in the process. "SDSS-III consists of four independent surveys," he said. "The fields range from searches for planets around nearby stars, to the chemical and dynamical evolution of our galaxy, to the large-scale structure of our universe."

After a decade of design and construction, the SDSS team began mapping the cosmos in 1998, using the dedicated 2.5-meter Sloan Foundation Telescope at Apache Point Observatory in New Mexico. Each phase of the project has used this telescope, which is equipped with a succession of powerful instruments, for a distinct set of astronomical surveys. SDSS-III started observations in July 2008 and completed its six-year, $45 million program in June 2014. The SDSS-III Collaboration includes 51 member institutions and one thousand scientists from around the world.

"One of the many innovations of SDSS-III was the construction of a high-resolution, infrared instrument that could examine the compositions and motions of hundreds of stars simultaneously," said Penn State Assistant Professor of Astronomy and Astrophysics Suvrath Muhadevan. "This aspect of SDSS-III produced detailed measurements of over 100,000 stars in the Milky Way and already is providing new insights into the formation and evolution of our galactic home." Mahadevan has been involved in a number of the SDSS-III investigations of planetary and stellar systems.

"One of the most important decisions we made at the beginning of the SDSS was that we would release all of our data, so everyone could use it," said Alex Szalay of Johns Hopkins University, which developed the powerful online interfaces that most astronomers and many in the general public use to access the SDSS.

The Sloan Survey has begun its fourth phase, SDSS-IV, and is continuing on a new six-year mission to study cosmology, galaxies, and the Milky Way. Penn State is an institutional member of SDSS-IV. Funding for SDSS-III has been provided by the Alfred P. Sloan Foundation, the Participating Institutions, the National Science Foundation, and the U.S. Department of Energy Office of Science.

The SDSS-III web site is http://www.sdss3.org