Cape Verde's Fogo volcano violently erupted on November 23, 2014, after almost 20 years of sleep. The lava flow already destroyed Portela and Bangaeira villages and is now on its way toward Ferdinand Gomes (Fernão Gomes).

According to a press release from the Office of Communication, the volcanic eruption was in stable condition today and the advance of lava was slower than during previous days when it was rapidly advancing approximately 20 – 30 meters per minute, as seen in the video below.

Government has decided to increase Value Added Tax (VAT), from 15 to 15.5% during 2015, in order to guarantee the revenue to solve the housing problem of all the people affected by Fogo's eruption and ensure the means for income-generating activities for the displaced. More than 1 700 people have lost their homes and farms since November 23.

The National Civil Protection Service (SNPC), together with local municipalities, has already started preparing to quickly evacuate any settlement that may suffer from the further advance of lava. Arlindo Lima, president of SNPC, urged people to remain calm as the institution will work to ensure the safety of the population.

Involcan reported that sulfur dioxide output at Fogo was approximately 9 000 tons/day yesterday, which shows the system is still very active.

The following map shows the delineation of the lava flow as of December 8 and damage grading on assets in the area. 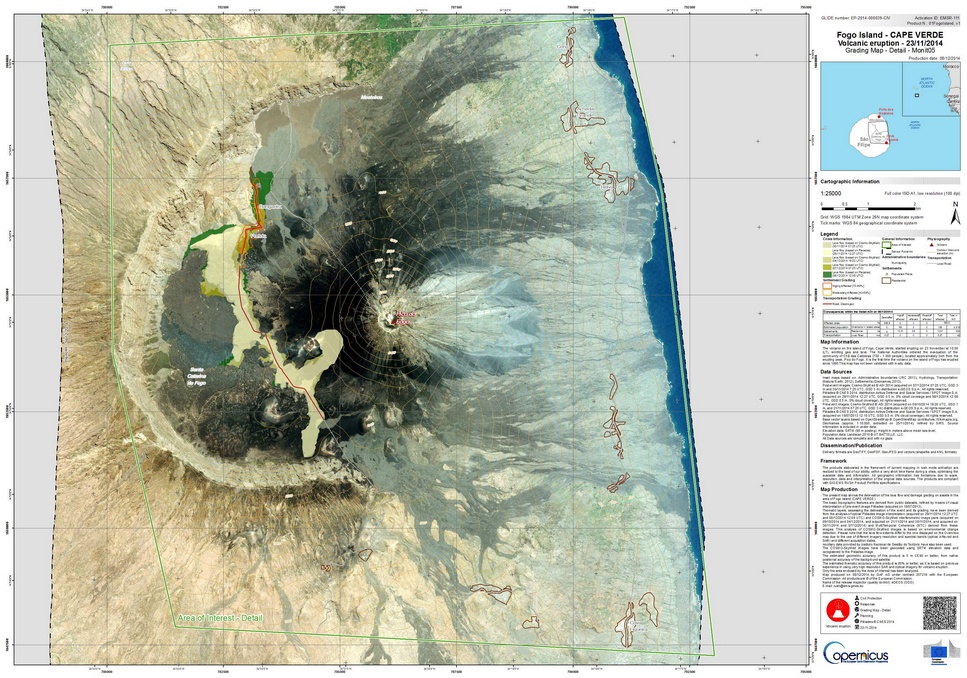 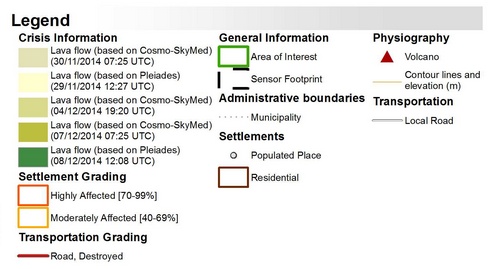 Everything is gone. No buildings have survived the #fogo #eruption Saddest days for us, after 7 years working there. pic.twitter.com/9e6b6iNkdo

When nature rages on , we can only watch and withdraw, hoping for better days. #science #breaking #nature pic.twitter.com/2zVy6pIq3s

People watching the lava flow claiming their houses and the road at Cha das Caldeiras. pic.twitter.com/4RoDniPlUE

“Ye who enter,abandon all hope.” Dante Alighieri, Inferno. Hell may look like this. pic.twitter.com/FpAiYbwrVh

The island of Fogo consists of a single massive stratovolcano that is the most prominent of the Cape Verde Islands. The roughly circular 25-km-wide island is truncated by a large 9-km-wide caldera that is breached to the east and has a headwall 1 km high. The caldera is located asymmetrically NE of the center of the island and was formed as a result of massive lateral collapse of the ancestral Monte Armarelo edifice.

A very youthful steep-sided central cone, Pico, rises more than 1 km above the caldera floor to about 100 m above the caldera rim, forming the 2829 m high point of the island. Pico, which is capped by a 500-m-wide, 150-m-deep summit crater, was apparently in almost continuous activity from the time of Portuguese settlement in 1500 CE until around 1760. Later historical lava flows, some from vents on the caldera floor, reached the eastern coast below the breached caldera. (GVP)