As hurricanes threaten the Aloha State, astronomers working at W. M. Keck Observatory on the island of Hawaii were surprised by the appearance of gigantic swirling storm systems on the distant planet Uranus.

During the Voyager encounter with Uranus in 1986, only a scant handful of dim clouds were seen in its atmosphere. When the planet approached equinox in 2007 (i.e., when the Sun stood high above its equator), large storms developed on the planet, yet most of these faded.

In the past few days, however, astronomers were surprised by a multitude of bright storms on the planet, including one monstrous feature.

“We are always anxious to see that first image of the night of any planet or satellite, as we never know what it might have in store for us,” said Imke de Pater, professor at UC Berkeley and team leader. “This extremely bright feature we saw on UT 6 August 2014 reminds me of a similarly bright storm we saw on Uranus’s southern hemisphere during the years leading up to and at equinox”.

“Even after years of observing, a new picture of Uranus from Keck Observatory can stop me in my tracks and make me say Wow!,” said Heidi Hammel, a member of the observing team. 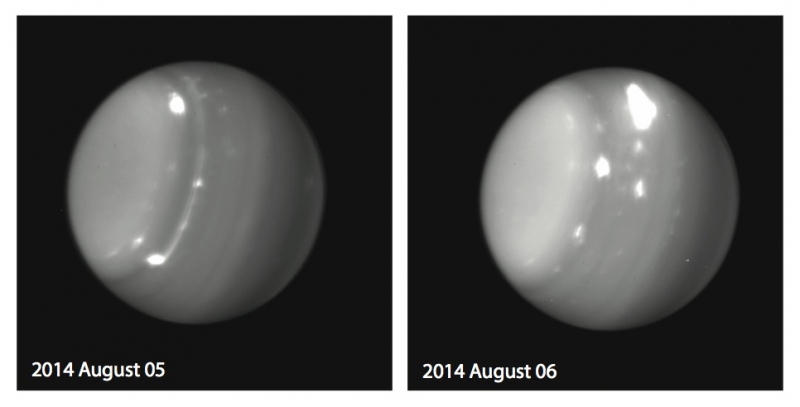 Massive storms on Uranus captured August 5 and 6, 2014 as seen by Keck Observatory. Both images were taken by Imke de Pater (UC Berkeley), Larry Sromovosky and Pat Fry (U. Wisconsin), and Heidi Hammel (AURA) using the near-infrared camera NIRC2 with adaptive optics on the 10-m Keck II telescope at a wavelength of 1.6 micron.

Since the 2007 equinox, Uranus’s northern pole has been coming into view, and the south pole is no longer visible. The bright feature de Pater refers to was known as the “Berg”, because this feature was visible just below the polar haze, and resembled an iceberg peeled off an ice-shelf. The Berg oscillated in latitude between southern latitudes of 32 and 36 degrees since 2000, and perhaps dated back to the Voyager era (1986). In 2004 it became much brighter; in 2005 it started to migrate towards the equator and became a very powerful storm system. In 2009, when it came to within a few degrees of the equator, it dissipated.

The present storm is even brighter than the Berg. Its morphology is rather similar, and the team expects it may also be tied to a vortex in the deeper atmosphere. From near-infrared images taken at 2.2 micron, the team already determined that the storm must reach high altitudes; they will conduct calculations to determine the precise altitude, but based upon its brightness at those wavelengths the team expects it to reach altitudes near the tropopause.

As the hurricanes Iselle and Julio gain in strength near Hawaii, it will be interesting to see how the storms on another world also continue to evolve.