Short power cut was registered immediately after the quake. Minor damage and cracked walls were reported.

The earthquake occurred as a result of oblique-thrust faulting. Preliminary faulting mechanisms for the event indicate it ruptured either a structure dipping shallowly to the south and striking approximately east-west, or a near-vertical structure striking northwest-southeast. At the location of this earthquake, the North America plate moves west-southwest with respect to the Caribbean plate at a velocity of approximately 20 mm/yr, and subducts beneath the Caribbean plate at the Puerto Rico Trench.  The location, depth and mechanism of the earthquake are consistent with the event occurring on this subduction zone interface.

While the Puerto Rico Trench is known to be a significant seismic hazard, and is capable of hosting M8+ earthquakes, moderate-to-large events on the subduction zone are rare. Over the past century, three such events have occurred nearby to the January 13, 2014 earthquake – a M 6.6 event in 1915, just to the east of the 2014 event; a M 7.0 earthquake 70 km to the west in 1917; and a M 7.6 earthquake in 1943 just northwest of the 2014 earthquake. Two earthquakes occurred in the Mona Passage approximately 100 km to the southwest of the 2014 earthquake in 1916 (M 7.0) and 1918 (M 7.3), while the 1946 M 7.9-8.0 Hispaniola earthquake struck 230 km to the west, also on the North America slab interface. The July 1943 North Mona Passage earthquake did not cause significant damage in Puerto Rico, though it did spawn a small tsunami, and was the first in a series of large events in the broader northern Caribbean region between central Hispaniola and Puerto Rico over the following decade, including the larger 1946 earthquake. The 1946 event is known to have caused significant damage in both Hispaniola and Puerto Rico, including destruction from a subsequent tsunami (USGS). 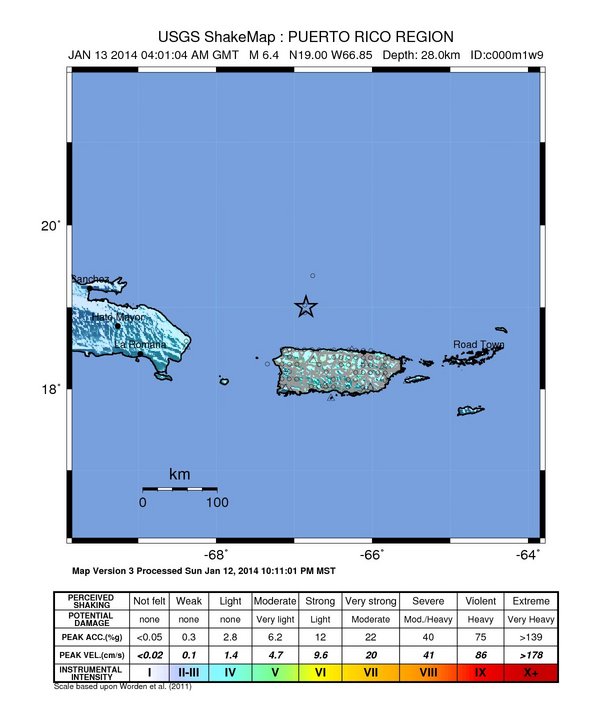