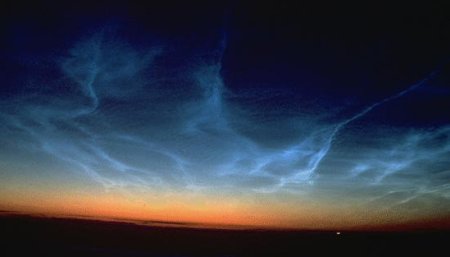 The season of noctilucent, "night-shining", clouds has begun in the southern hemisphere and NASA's AIM spacecraft is monitoring a vast bank of rippling electric-blue NLCs blanketing almost all of Antarctica.

Noctilucent clouds (electric-blue clouds or NLCs) were first seen in 1885, about two years after the powerful eruption of Krakatoa in Indonesia, which hurled plumes of ash as high as 80 km into Earth's atmosphere but NLCs have intensified over the last few years and some researchers see this is a sign of climate change.

A century ago the clouds were confined to latitudes above 50o; you had to go to places like Scandinavia, Russia and Britain to see them. In recent years they have been sighted as far south as Utah and Colorado… (Source)

"When methane makes its way into the upper atmosphere, it is oxidized by a complex series of reactions to form water vapor," explains Hampton University Professor James Russell, the principal investigator of AIM." This extra water vapor is then available to grow ice crystals for NLCs."

The following movie shows last two weeks of AIM data. It chronicles the onset of the clouds in late November and their rapid spread into December 2013. 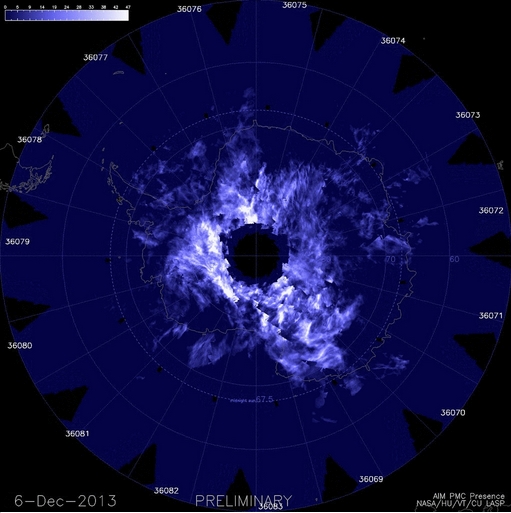 Click here to set the scene in motion. AIM spacecraft via SpaceWeather

The 2013 northern hemisphere noctilucent season was remarkable because it started a week earlier than in any other season AIM has observed, said Cora Randall, at the Laboratory of Atmospheric and Space Physics at the University of Colorado. This is quite possibly earlier than ever before, she added. (June 7, 2013 – NASA AIM)

The early start is extra-puzzling because of the solar cycle. Researchers have long known that NLCs tend to peak during solar minimum and bottom-out during solar maximum – a fairly strong anti-correlation. "If anything, we would have expected a later start this year because the solar cycle is near its maximum," Randall says. "So much for expectations."

Noctilucent clouds and aurora over Scotland on camera