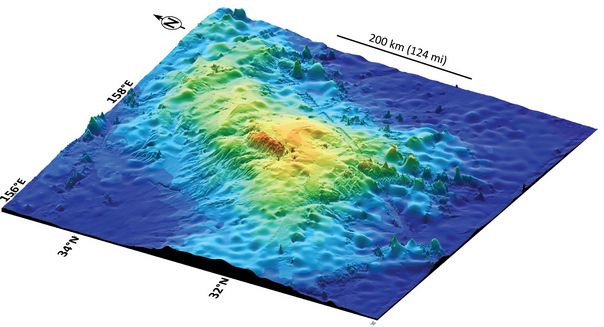 A giant volcano has been identified under the Pacific Ocean, about 1 600 kilometers east of Japan, making it the biggest single volcano on Earth and one of the biggest in the Solar system. Tamu Massif, the giant shield volcano which covers an area of about 310 798 km2, had been thought to be a composite of smaller structures, but now scientists say they must rethink long-held beliefs about marine geology.

Tamu Massif's size is comparable to that of Olympus Mons, which is the largest volcano in Solar system that we know. That giant volcano, which is visible on a clear night with a good backyard telescope, is only about 25 percent larger by volume than Tamu Massif.

“This finding goes against what we thought, because we found that it’s one huge volcano,” said William Sager, a geology professor at the University of Houston in Texas. Sager is lead author in a study about the find that was published this week in the peer-reviewed journal Nature Geoscience.

"It is an amazing discovery, and overturns previous conclusions that Earth cannot support the development of such giant volcanoes because it lacks a thick and rigid planetary lithosphere," says Jamie Allan, program director in the National Science Foundation's Division of Ocean Sciences, which funded the research.

"Much remains to be discovered about our planet," says Allan, "with scientific drilling offering a means of observation and discovery into otherwise inaccessible parts of the Earth."

Tamu Massif is the largest feature of Shatsky Rise, an underwater mountain range formed 145-130 million years ago by the eruption of several underwater volcanoes.

By integrating several sources of evidence, including core samples and data collected on board the JOIDES Resolution, scientists have confirmed that the mass of basalt that constitutes Tamu Massif did indeed erupt from a single source near the center.

"There may be larger volcanoes, because there are bigger igneous features out there such as the Ontong Java Plateau. But we don't know if these features are one volcano or complexes of volcanoes."

"It's not high, but very wide, so the flank slopes are very gradual," Sager explains.

"In fact, if you were standing on its flank, you would have trouble telling which way is downhill.

"We know that it is a single immense volcano constructed from massive lava flows that emanated from the center of the volcano to form a broad, shield-like shape. Before now, we didn't know this because oceanic plateaus are huge features hidden beneath the sea. They have found a good place to hide." 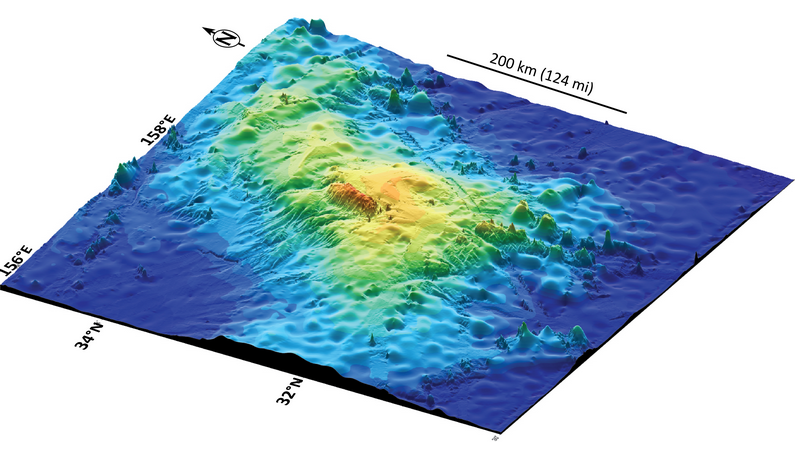 By comparison, Hawaii's Mauna Loa–the largest active volcano on Earth – is a mere 5 179 square kilometers (2 000 square miles), or less than 2 percent the size of Tamu Massif.

The study relies on two distinct yet complementary sources of evidence: core samples collected on Integrated Ocean Drilling Program Expedition 324, which tested plume and plate models of ocean plateau formation at Shatsky Rise in the northwest Pacific Ocean in 2009, and seismic reflection data gathered on two separate expeditions of the research vessel Marcus G. Langseth in 2010 and 2012.

The core samples, drilled from several locations on Tamu Massif, showed that thick lava flows up to 75 feet thick characterize this volcano.

Seismic data from the Langseth cruises revealed the structure of the volcano, confirming that the lava flows emanated from its summit and flowed hundreds of miles downhill into the adjacent basins.

"This finding gives us new insights about oceanic volcanism, the way in which oceanic plateaus form, and the operation of the mantle-crust system," Sager explains.

"Volcanologists debate about the eruptive centers of what are called large igneous provinces. I think most would tell you that they probably come from multiple, distributed fissure eruptions. But apparently not at Tamu Massif."