Only two days passed since the last eruption, and new, 12th paroxysm of the New SE crater happened during April 20, 2013. According to INGV Sezione di Catania, explosive activity had resumed on April 19, 2013, less than 24 hours after the end of the previous paroxysm. Throughout the night of April 19-20, 2013, the explosive activity switched to quiet, non-explosive emission of lava from the eruptive fissure at the southeastern base of the NSEC cone, which had opened a the end of the April 12, 2013 paroxysm but stayed inactive during the subsequent paroxysm on April 18, 2013. 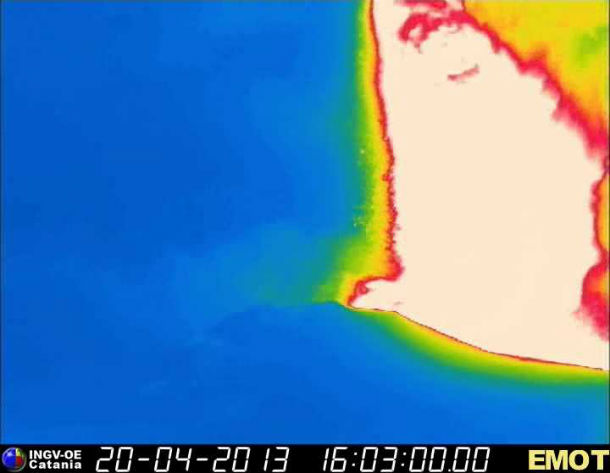 During the day of April 20, 2013, effusive activity continued, but explosive phenomena were virtually nonexistent until about 15:00 GMT (=local time -2), when violent explosions begun, which rapidly passed into a lava fountain accompanied by the formation of an eruption column. The lava fountains reached heights of 800-1000 m above the crater, whereas the cloud of pyroclastic material spread toward east-southeast, leading to heavy falls of ash and lapilli over the areas of Zafferana Etnea, Milo, Santa Venerina and further downslope, in the area of Giarre. 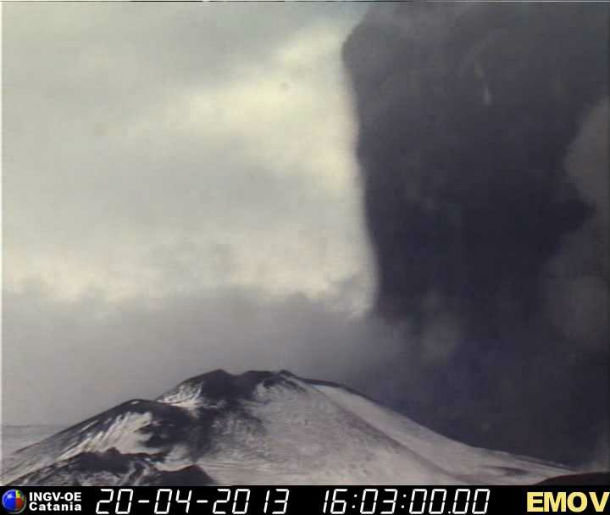 When the eruption ended, there were at least two pyroclastic flows formed towards Valle del Bove. A well-fed lava flow expanded down the western slope of the Valle del Bove, locally getting in contact with residual patches of snow, which resulted in the formation of lahars and ground-hugging steam and ash clouds, a phenomenon seen several times during previous paroxysms during the winter season on Etna. Lava fountaining continued for about one hour, and then passed into sporadic explosions and ash emission. The episode was quickly over, although the lava flow is still showing movement and probably is still being fed from its source vent.