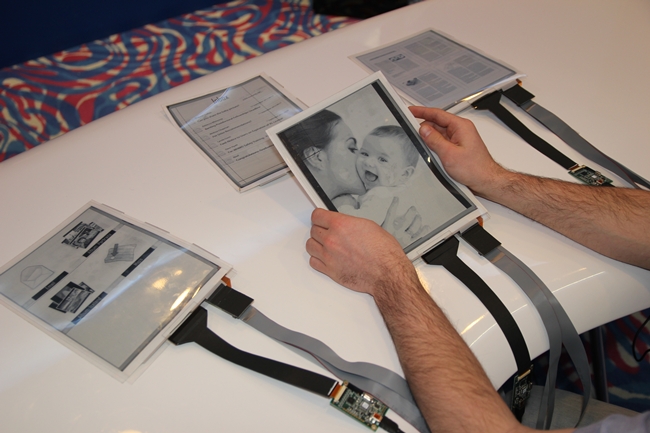 Plastic Logic, Queen’s University and Intel® labs have collaboratively developed a flexible plastic computer tablet. Its called PaperTab, looks and feels just like a sheet of paper. It is fully interactive and flexible with a  high-resolution 10.7” plastic display developed by Plastic Logic and is  powered by second generation Intel® CoreTM i5 Processor. Researchers have attempted to revolutionize the way we use tabs by utilizing several interactive “PaperTabs” as display for each application instead of using several windows on a single display.

“Using several PaperTabs makes it much easier to work with multiple documents,” says Roel Vertegaal, Director of Queen’s University’s Human Media Lab. “Within five to ten years, most computers, from ultra-notebooks to tablets, will look and feel just like these sheets of printed color paper.”

Video demonstration shows how intuitive PaperTab’s interface is – it allows a user to send a photo simply by tapping one PaperTab showing a draft email with another PaperTab showing the photo. The photo is then automatically attached to the draft email. The email is sent either by placing the PaperTab in an out tray, or by bending the top corner of the display.

Similarly, a larger drawing or display surface is created simply by placing two or more PaperTabs side by side. PaperTab thus emulates the natural handling of multiple sheets of paper by combining thin-film display, thin-film input and computing technologies through intuitive interaction design. Furthermore, PaperTabs are lightweight and robust, so they can easily be tossed around on a desk while providing a magazine-like reading experience. By bending one side of the display, users can also navigate through pages like a magazine, without needing to press a button. Indro Mukerjee, CEO of Plastic Logic says,

“Plastic Logic’s flexible plastic displays are completely transformational in terms of product interaction. They allow a natural human interaction with electronic paper, being lighter, thinner and more robust compared with today’s standard glass-based displays. This is just one example of the innovative revolutionary design approaches enabled by flexible displays.”

PaperTab replaces the need for a computer monitor and stacks of papers or printouts by its capacity to file and display thousands of paper documents. Unlike traditional tablets, PaperTabs keep track of their location relative to each other, and the user, providing a seamless experience across all apps, as if they were physical computer windows. For example, when a PaperTab is placed outside of reaching distance it reverts to a thumbnail overview of a document, just like icons on a computer desktop. When picked up or touched a PaperTab switches back to a full screen page view, just like opening a window on a computer.