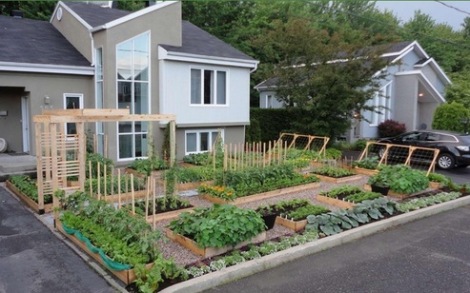 A Canadian couple that has been growing a beautiful, meticulously-maintained front yard vegetable and herb garden has been ordered by city officials to uproot most of it by September 1 or else face lofty fines. CBC News and others are reporting that the town of Drummondville in Quebec is actually planning to ban all front yard gardens in the municipality beginning this fall; a move the spells the end of food self-sufficiency for many Canadians living in the area.

Michel Beauchamp and Josee Landry love to grow their own food. But the back yard of their well kept, Saint-Charles area home does not get enough natural sunlight throughout the day to grow the many varieties of fresh fare they have long enjoyed. So they asked their town’s Environmental Services Inspector if it was permissible to grow food in their front yard, and they were given a verbal affirmative that this was not a problem.

“They used to have flowers growing, but Beauchamp has high blood pressure and wanted to eat healthier. So they planted cucumbers, tomatoes, zucchinis, beets, onions, and Brussels sprouts, among other vegetables,” said CBC News about the garden. According to the same report, Beauchamp has lost an astounding 75 pounds since first planting the garden, and much of this is due to his having been able to grow and eat his own healthy food at home.

Drummondville changes its mind, betrays Beauchamp and his wife

But after the couple invested roughly $2,500 to install the garden, which is among the most tasteful and orderly front yard gardens that you will likely ever see, by the way (http://grist.org/list/city-officials-are-waging-a-war-on-gardens/), Drummondville officials turned on the couple and told them that they would have to remove most of their garden or else face a daily fine of up to $300 — and the couple was given just seven days to comply with this demand.

According to city officials, every front yard garden in Drummondville has to contain at least 30 percent grass, a requirement that Beauchamp and his wife did not comply with when they installed the garden. It does not appear that the couple was ever even told about the requirement; as they had previously received approval to plant the garden as it currently is.

When Beauchamp and his wife challenged the city on the order, officials did not relent, but instead gave the couple a compliance extension, telling them that they had until September 1 to rip up part of their garden. The two are still fighting the city over the issue, though, and continue to try to convince officials to do away with the silly ordinance.

“It must be a right to be able to grow our own vegetables on our land,” said Beauchamp to CBC News. “It is nonsense to ban it.”

Meanwhile, Drummondville officials are moving forward with a new ordinance that will completely restrict front yard gardens altogether, no matter their size, which puts Beauchamp and his wife and many others out of the food self-sufficiency business. Since many back yards in the area are too small or do not receive the proper amounts of natural sunlight, many areas’ residents will essentially be restricted from ever growing their own food unless they move.

Similar jack-booted oppression by local officials is taking place in the U.S. as well, including in Tulsa, Okla., where a woman recently had her entire front yard garden illegally bulldozed by city officials (http://www.naturalnews.com). Similar cases of home-grown food destruction have taken place in Georgia, Michigan, and New Jersey.