Despite being one of the most active volcanoes in Papua New Guinea, Bagana is poorly monitored. Located on the mountainous spine of Bouganville Island, it is both far from any cities or large towns and hard to reach due to the rough terrain. Bagana emits volcanic gases (including water vapor and sulfur dioxide) almost continuously, and frequently extrudes thick lava flows. Satellites provide the most reliable way to watch this activity. 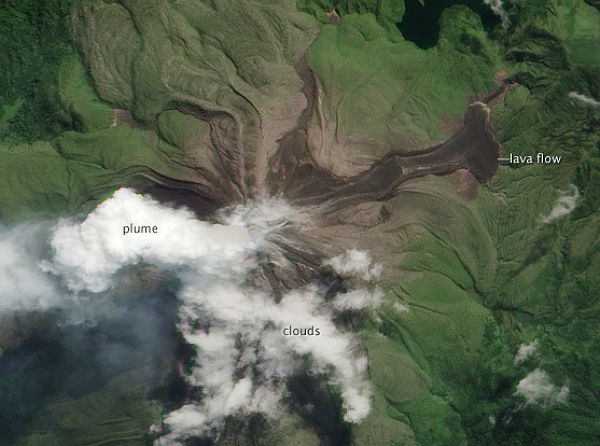 This natural-color image reveals a fresh lava flow on Bagana’s eastern flank. The image was collected by the Advanced Land Imager (ALI) aboard the Earth Observing-1 (EO-1) satellite on May 16, 2012. Imagery from Landsat 7 shows that the flow was established some time between March 2011 and February 2012. The fresh lava is dark brown, while lighter brown areas were likely stripped of vegetation by volcanic debris or acidic gases. Older lava flows are covered in light green vegetation, and the surrounding forests are dark green. The volcanic plume and clouds are both white.

Bagana volcano, occupying a remote portion of central Bougainville Island, is one of Melanesia's youngest and most active volcanoes. Bagana is a massive symmetrical, roughly 1750-m-high lava cone largely constructed by an accumulation of viscous andesitic lava flows. The entire lava cone could have been constructed in about 300 years at its present rate of lava production. Eruptive activity at Bagana is frequent and is characterized by non-explosive effusion of viscous lava that maintains a small lava dome in the summit crater, although explosive activity occasionally producing pyroclastic flows also occurs. Lava flows form dramatic, freshly preserved tongue-shaped lobes up to 50-m-thick with prominent levees that descend the volcano's flanks on all sides.