Spain has faced the driest winter ever recorded. It has raised red flags in Spain, where farmers face the threat of extreme  drought. Grain crops in Spain are suffering after an unusually dry autumn and winter. The amount of rainfall has been just half of normal in key grain producing regions. 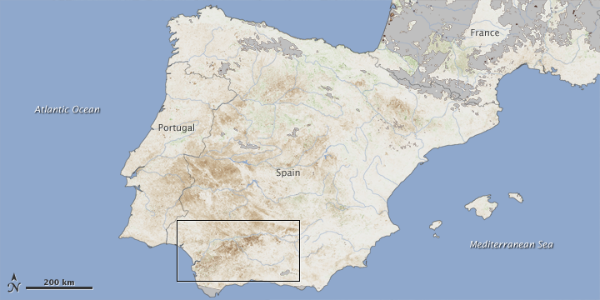 In an analysis released on May 10, 2012, the USDA Foreign Agricultural Service, projected Spain’s wheat production would drop by 20 percent, oats by 18 percent, and barley by 14 percent in comparison to last year. Overall, the USDA expects Spain will need to import 11 million metric tons of grain from other European countries because of the drought.

In late April, increasing rainfall has started to improve the situation, particularly in the northern half of the country. If rain continues to fall regularly throughout May, there’s a chance that barley and wheat yields could rebound. 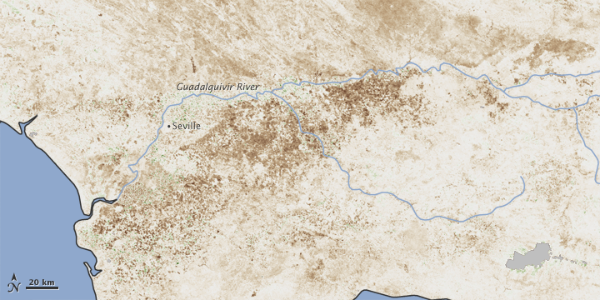 Spain is not the only European country grappling with a weak wheat crop. Ukraine, Romania, Bulgaria, and other countries will likely see reduced yields as well due to dry weather. A cold spell at the end of February in Poland and Germany has also harmed crops. (EarthObservatory)

European Union Wheat: Dryness and Winterkill Reduce Prospects
Wheat production in the European Union (EU) for 2012/13 is forecast at 132.0 million tons, down 5.4 million or 4 percent from last year. Harvested area is estimated at 24.9 million hectares, down 0.7 million or 3 percent from last year, and yield is forecast at 5.3 tons per hectare, compared to last year’s 5.36 tons. The EU-27 is the largest wheat producing entity in the world. 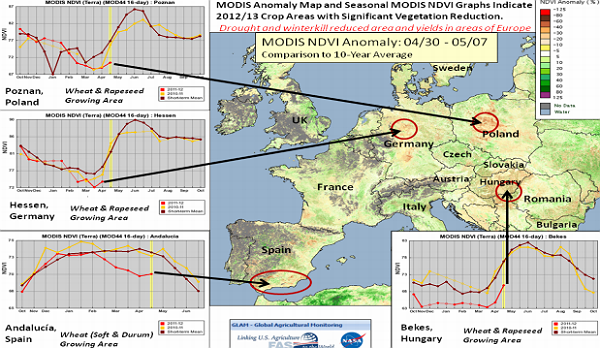 France, Germany, the United Kingdom, and Poland are the biggest producers within the EU, with 2012/13 estimated production at 36.5 million, 22.5 million, 15.6 million, and 8.8 million tons, respectively. Spain’s southernmost province of Andalucía has the nation’s highest concentration of wheat and almost all of its durum. Fall and winter drought severely limited wheat development in Andalucía. While significant April rain events benefitted earlier-stage northern crops, it was likely too late to improve conditions in the south. Dryness was a significant problem during the planting campaign for wheat last autumn in Romania, Bulgaria, Hungary, and other areas in southeastern Europe. As a result, the estimated harvested area and yield are down. (FAS/USDA)