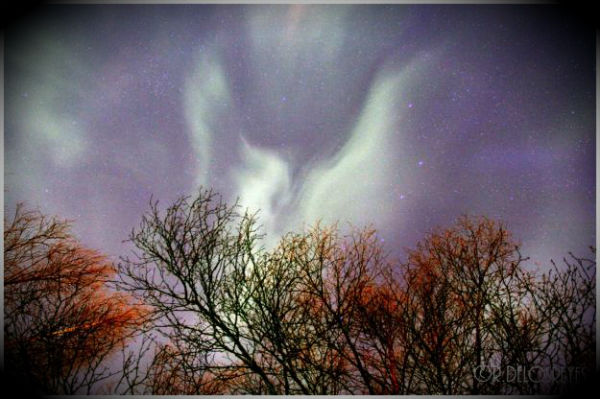 Sunspot AR1465 has developed a ‘beta-gamma-delta’ magnetic field that harbors energy for X-class solar flares. Because of the sunspot’s location near the middle of the solar disk, any eruptions will likely be Earth-directed.

Earth’s magnetic field is quieting after two straight nights of mild to moderate geomagnetic storms. At the height of the disturbance on April 23-24, auroras were spotted in more than a dozen US states including Michigan, Nebraska, Kansas, Wisconsin, North Dakota, South Dakota,Iowa, Illinois, Minnesota, and Colorado.

More auroras may be in the offing. A minor CME is en route to Earth, due to arrive on April 26th. NOAA forecasters estimate a 20% to 30% chance of geomagnetic storms.

Solar activity has been fairly low with the largest event being a C3.7 Solar Flare detected around Sunspot 1460 on Wednesday morning. This region is now approaching the western limb. All other regions have been fairly quiet with only low-level C-Class activity observed. There will remain a small chance for an isolated M-Class flare. 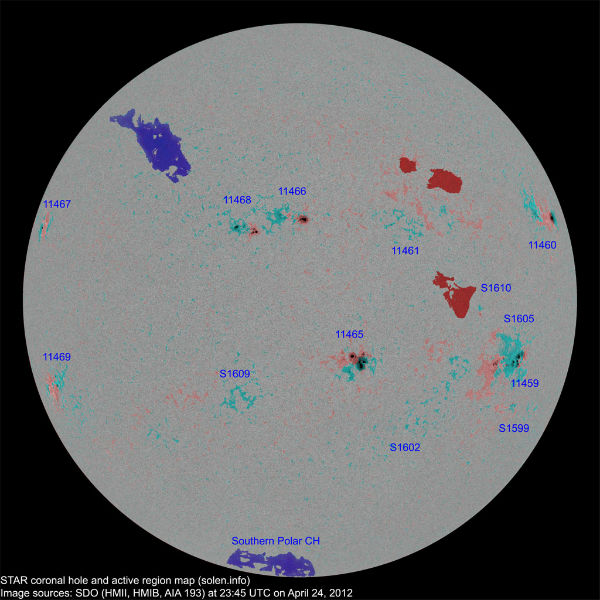 Solar activity has been at low levels for the past 24 hours with multiple C-class x-ray events. A C3 flare was observed at
24/0745Z off the east limb from new Region 1467 (N14E72). Associated with this event, were both a type II radio sweep (estimated shock velocity of 1029 km/s) and a non-Earth directed CME. Two other new regions were numbered today, Region 1468 (N09E12) which rapidly emerged on the disk and Region 1469 (S21E68), which rotated onto the disk. The remaining active regions were stable and quiet today, except for Region 1465 (S19W12). Region 1465 showed a consolidation of both leader and follower spot groups into one cluster and is now classified as a beta-gamma-delta. Solar activity is expected to be at low levels with a slight chance for M-class activity for the next three days (25 – 27 April).

The geomagnetic field ranged from quiet to major storm levels during the past 24 hours due to continued CME effects and the arrival of a coronal hole high speed stream (CH HSS). Early in the period, measurements from the ACE spacecraft showed extensive southward (negative) periods of the Bz component of the IMF. Even though solar wind speeds remained well below nominal levels, these periods drove the majority of the geomagnetic activity. Around 24/0200Z, CH HSS characteristics were observed by the ACE spacecraft with solar wind density dropping off as the solar wind speed increased. At the time of this report, solar wind speeds had increased from around 350 km/s to around 630 km/s.

Featured image: On the threshold of the Arctic Circle in Anchorage, Alaska, the Northern Lights pierced the glow of the midnight sun (Credit: Ryan Delos Reyes)