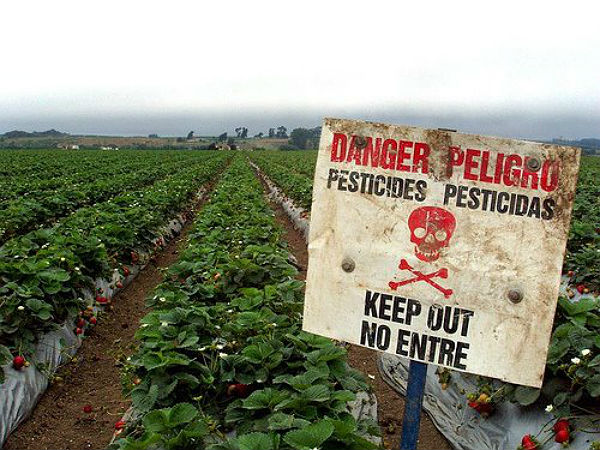 Exposure of pregnant women to organophosphate (OP) pesticides, a widely used class of pesticides in North American agriculture, may be associated with decreased gestational age and lower birth weight, according to a study published on Thursday. The new study, conducted by Vancouver-based Simon Fraser University (SFU) researchers, finds that the decrement in birth weight for OP pesticide exposure was comparable with the decrement seen for women who smoke cigarettes.This findings again raise people’s concern about the harmful effects of low-level exposures to environmental toxicants. Although the use of OPs in Canada and the U.S. has declined in recent years, exposures remain widespread.

The conclusions were made after studying a population of 306 women in Cincinnati, Ohio, which the paper’s authors said is representative of the type of exposures most North American women and their children experience. Environmental Health Perspectives published the paper, Associations of PrenatalExposure to Organophosphate Pesticide Metabolites, online. Bruce Lanphear, the study’s senior author and also an SFU health sciences professor, explained  that for an individual child, a decrement of 150-gram reduction in birth weight is of little consequence, but this is just one of many risk factors that a pregnant woman might encounter. If a woman has four or five risk factors, the impact can be substantial.

According to the researchers, if these results are confirmed, they would help to identify OP pesticides as an important risk factor for babies being born too early or small. It could reduce problems encountered by many children who are born small or pre-term, such as respiratory infections, asthma, learning and behavioral problems. Expectant mothers should eat organic foods, especially organic fruits and vegetables, to reduce exposures to OP pesticides. If they cannot afford organic fruits and vegetables, they should wash them carefully. And families can stop using pesticides in and around their homes and advocate to ban cosmetic pesticides in their province, researchers suggested. (Source: SFU.ca)

A coalition of five US groups launched a lawsuit in 2008 in an attempt to have four organophosphate pesticides removed from the market. The lawsuit is still in legal limbo, and there is no indication as to when it might be resolved as far as we know. 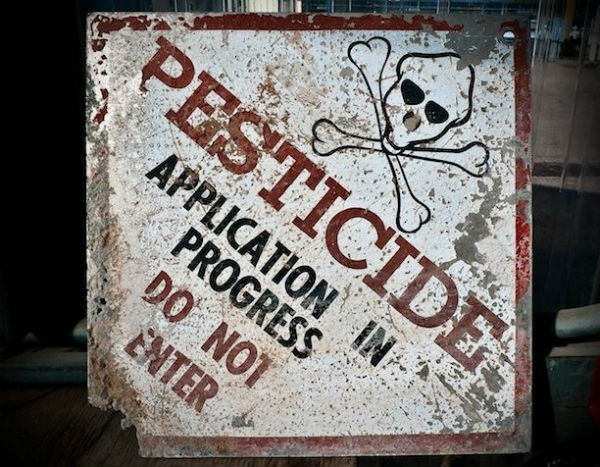 In health, agriculture, and government, the word “organophosphates” refers to a group of insecticides or nerve agents acting on the enzyme acetylcholinesterase. Organophosphate pesticides (as well as sarin and VX nerve agent) irreversibly inactivate acetylcholinesterase, which is essential to nerve function in insects, humans, and many other animals. Organophosphate pesticides affect this enzyme in varied ways, and thus in their potential for poisoning. For instance, parathion, one of the first OPs commercialized, is many times more potent than malathion, an insecticide used in combatting the Mediterranean fruit fly (Med-fly) and West Nile Virus-transmitting mosquitoes.

Organophosphate pesticides degrade rapidly by hydrolysis on exposure to sunlight, air, and soil, although small amounts can be detected in food and drinking water. Their ability to degrade made them an attractive alternative to the persistent organochloride pesticides, such as DDT, aldrin and dieldrin. Although organophosphates degrade faster than the organochlorides, they have greater acute toxicity, posing risks to people who may be exposed to large amounts.

Commonly used organophosphates have included parathion, malathion, methyl parathion, chlorpyrifos, diazinon, dichlorvos, phosmet, fenitrothion, tetrachlorvinphos, and azinphos methyl. Malathion is widely used in agriculture, residential landscaping, public recreation areas, and in public health pest control programs such as mosquito eradication. In the US, it is the most commonly used organophosphate insecticide. Forty organophosphate pesticides are registered in the U.S., with at least 73 million pounds used in agricultural and residential settings.  They are of concern to both scientists and regulators because they work by irreversibly blocking an enzyme that’s critical to nerve function in both bugs and people. Even at relatively low levels, organophosphates may be most hazardous to the brain development of fetuses and young children. The EPA banned most residential uses of organophosphates in 2001, but they are still sprayed agriculturally on fruits and vegetables. They’re also used to control pests like mosquitos in public spaces such as parks. They can be absorbed through the lungs or skin or by eating them on food.

Many organophosphates are potent nerve agents, functioning by inhibiting the action of acetylcholinesterase (AChE) in nerve cells. They are one of the most common causes of poisoning worldwide, and are frequently intentionally used in suicides in agricultural areas. Organophosphorus pesticides can be absorbed by all routes, including inhalation, ingestion, and dermal absorption. Their toxicity is not limited to the acute phase, however, and chronic effects have long been noted. Neurotransmitters such as acetylcholine (which is affected by organophosphate pesticides) are profoundly important in the brain’s development, and many OPs have neurotoxic effects on developing organisms, even from low levels of exposure. Other organophosphates are not toxic, yet their main metabolites, such as their oxons are. 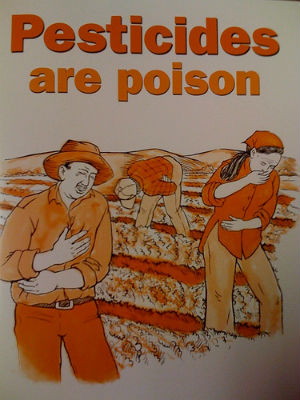 Effects reported in workers repeatedly exposed include impaired memory and concentration, disorientation, severe depressions, irritability, confusion, headache, speech difficulties, delayed reaction times, nightmares, sleepwalking and drowsiness or insomnia. An influenza-like condition with headache, nausea, weakness, loss of appetite, and malaise has also been reported. Chronic fatigue is common amongst those who consider their health is affected by pesticides and research from 2003 suggested there was an association between exposure to organophosphates and chronic fatigue symptoms. Even at relatively low levels organophosphates may be hazardous to human health. The pesticides act on a set of brain chemicals closely related to those involved in ADHD, thus fetuses and young children, where brain development depends on a strict sequence of biological events, may be most at risk.

A 2007 study linked the organophosphate insecticide chlorpyrifos, which is used on some fruits and vegetables, with delays in learning rates, reduced physical coordination, and behavioral problems in children, especially ADHD. A 2010 study has found that organophosphate exposure is associated with an increased risk of Alzheimer’s disease.

A 2010 study found that each 10-fold increase in urinary concentration of organophosphate metabolites was associated with a 55% to 72% increase in the odds of ADHD in children. The study found that organophosphate exposure is associated with an increased risk of ADHD in children. Researchers analyzed the levels of organophosphate residues in the urine of more than 1,100 children aged 8 to 15 years old, and found that those with the highest levels of dialkyl phosphates, which are the breakdown products of organophosphate pesticides, also had the highest incidence of ADHD. Overall, they found a 35% increase in the odds of developing ADHD with every 10-fold increase in urinary concentration of the pesticide residues. The effect was seen even at the low-end of exposure: children who had any detectable, above-average level of pesticide metabolite in their urine were twice as likely as those with undetectable levels to record symptoms of ADHD. Another 2010 study found that children who were exposed to organophosphate pesticides while still in their mother’s womb were more likely to develop attention disorders years later. The researchers evaluated the children at age 3.5 and 5 years for symptoms of attention disorders and ADHD using maternal reports of child behavior, performance on standardized computer tests, and behavior ratings from examiners. Each tenfold increase in prenatal pesticide metabolites was linked to having five times the odds of scoring high on the computerized tests at age 5, suggesting a greater likelihood of a child having ADHD. The effect appeared to be stronger for boys than for girls. Two studies found that children exposed to higher levels of organophosphate pesticides than their peers were more likely to be diagnosed with attention deficit hyperactivity disorder.

According to a 2008 report from the U.S. Department of Agriculture, in a representative sample of produce tested by the agency, 28 percent of frozen blueberries, 20 percent of celery, 27 percent of green beans, 17 percent of peaches, 8 percent of broccoli and 25 percent of strawberries contained traces of organophosphate. The United States Environmental Protection Agency lists the organophosphate parathion as a possible human carcinogen. (Wikipedia)

Prenatal Exposure to Organophosphates, Paraoxonase 1, and Cognitive Development in Childhood

Local and Organic Food and Farming: The Gold Standard by Will Allen and Ronnie Cummins and Kate Duesterberg