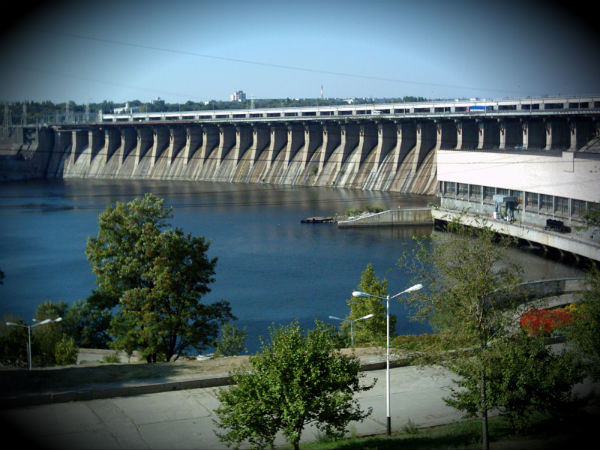 After an unusually cold winter in Ukraine, the spring melting of the Kyiv (or Kiev) Reservoir on the Dnieper River has caused potentially hazardous rafts of ice to start drifting toward a dam and hydroelectric plant at the southern edge of the reservoir. The average thickness of the ice on the reservoir is about 40 centimeters (16 inches), half what it was in 2011 when heavy flooding prompted officials to abruptly lower the water level of the reservoir. According to the National Radio Company of the Ukraine, the CEO of the company that operates the dam doesn’t expect similar action will be needed this year.

The dam is of particular importance because it sits at the head of a series of dams on the Dnieper River. If it were to fail, the floodwaters could potentially overwhelm downstream dams, causing severe flooding in Kyiv and other cities. The dam also receives particular scrutiny because the Kyiv Reservoir contains sediments contaminated with radionuclides from the Chernobyl nuclear meltdown of 1986. The defunct plant is located about 80 kilometers (50 miles) northwest of the dam, and a river that flows near it drains directly into the Kyiv Reservoir. (EarthObservatory) 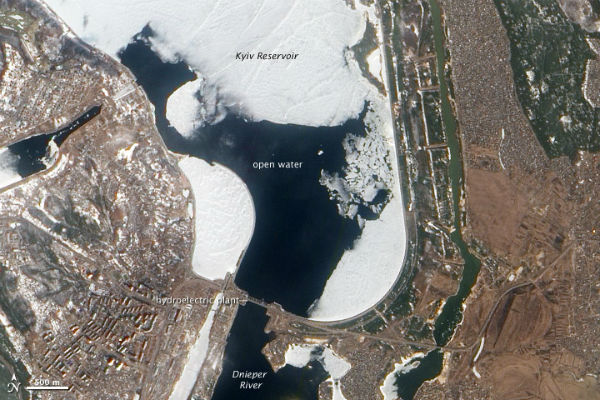 The Kiev Reservoir, locally the Kiev Sea, is a large water reservoir located on the Dnieper River in Ukraine. Named after the city of Kiev, which lies to the south, it covers a total area of 922 square kilometres within the Kiev Oblast. The reservoir was formed in 1960-1966, as a result of the Kiev Hydroelectric Power Plant dam being built at Vyshhorod. The reservoir is mainly used for hydroelectricity generation, industrial and public consumption, and irrigation.

The reservoir is 110 km in length, 12 km in width, has a depth of four to eight meters, a volume of 3.7 km³, and a usable volume of 1.2 km³. The reservoir, together with the Kakhovka Reservoir, the Dnieper Reservoir, the Dniprodzerzhynsk Reservoir, the Kremenchuk Reservoir, and the Kaniv Reservoir, has created a deep-water route on the river. However, the construction has also contributed to significant environmental problems such as the diminished flow velocity which reduces water oxygenation, and has a negative result on the balance of aquatic life forms. Also, during its construction some nearby villages were flooded. One of these was Teremtsi, where the residents of the village persuaded Soviet authorities to let them stay, only to be evacuated later in 1986. 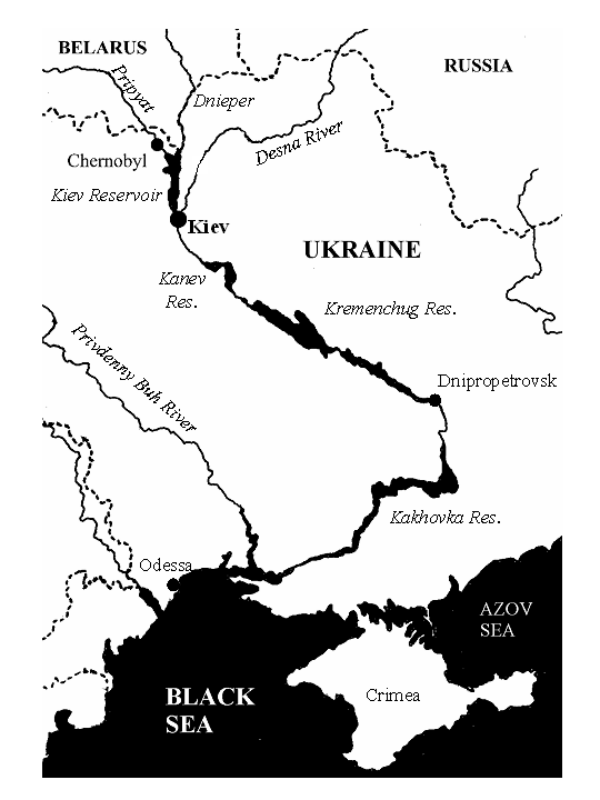 Threat of the Dnieper reservoirs

Like all Dnieper reservoirs, Kiev reservoir poses a potential threat of tremendous flooding if its dam is destroyed. The dams are supposed to be strong enough to survive natural and terrorist threats. Both their construction schemes and government efforts work towards this goal. For instance, some engineers guarantee that every Dnieper dam will survive an earthquake (to its typical regional extent), meteorite or aircraft falling. The Dnieper reservoirs pose a special risk by the fact that they form a cascade with an atypically short distance between them. In the case of one upper dam failure, massive flooding will impact other dams within hours, subsequently releasing lower reservoirs to the Black Sea. A similar disaster occurred with the Banqiao Dam, resulting in a cascade of 62 dam failures. Assessments of losses in a possible Dnieper hyperflooding vary, but remain very pessimistic.

In case of a dam failure, floodwaters may devastate densely populated areas around Dnipropetrovsk, Zaporizhzhia and Kherson, forcing evacuation and possibly killing millions, and destroying major industrial areas. A failure of the Kiev Reservoir would cause a flooding of the low-lying areas of Kiev, mainly densely populated residential neighborhoods. The aftermath of a possible complex flooding also include the widespread contamination by industrial and urban wastes and creation of swamps on bottoms of emptied reservoirs. 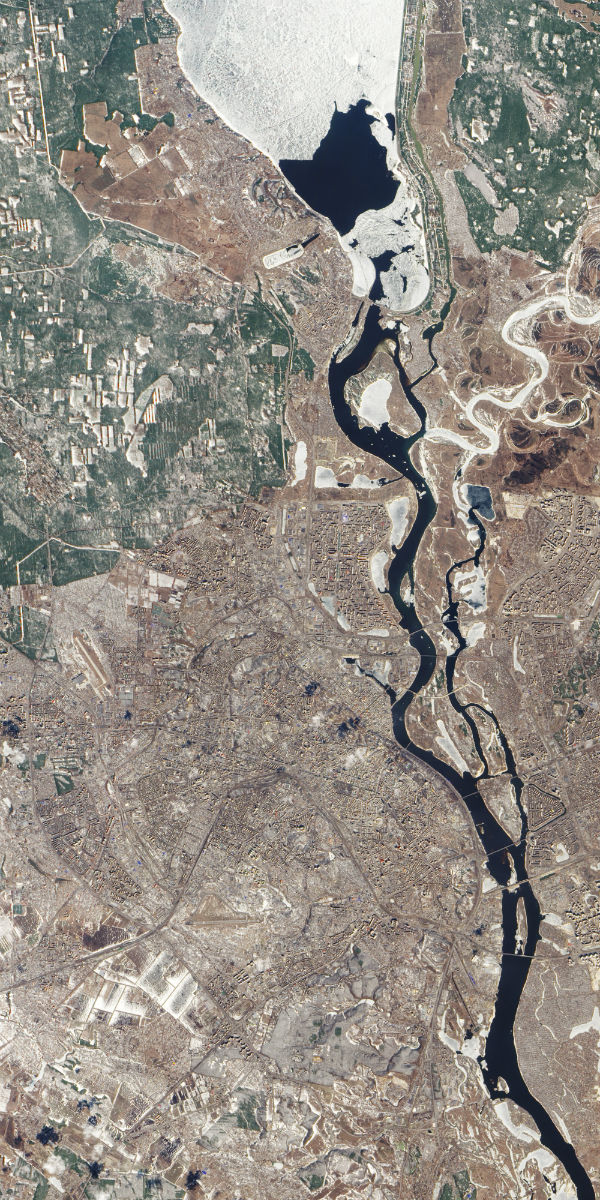 Moreover, it contains additional major threat – after the Chernobyl Nuclear Disaster in 1986, radionuclides washed away by rains badly contaminated the bottom silt of the reservoir. During the years following the disaster, there were suggestions to drain the reservoir because it was too shallow. It appeared that, if done, this could have created the threat of the tremendous amounts of radioactive dust travelling by wind, lethally affecting Europe. 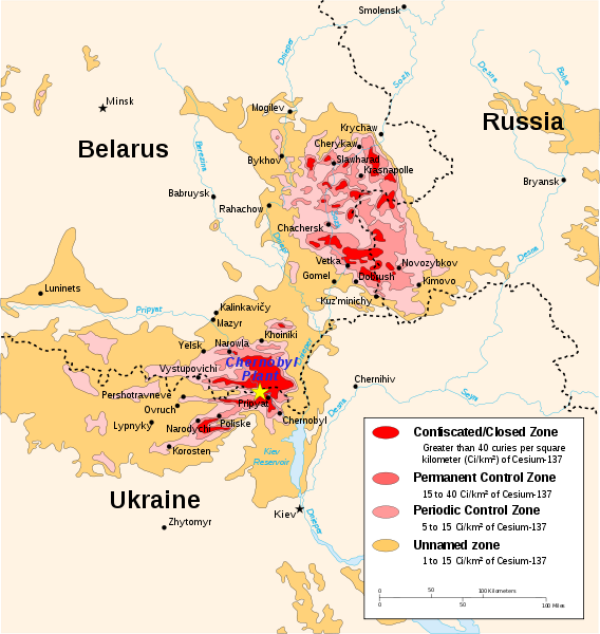 First of all, a release of each but the southernmost reservoir would damage several top-hazard nuclear sites in the Dnieper basin, as explained below. Subsequently, the whole Black Sea area would be radioactively contaminated to a significant extent. This would cause a Europe-wide nuclear disaster by means of large-distance air and water circulation. The cities of Dnipropetrovsk Oblast, standing on the Dnieper, contain dozens of hazardous industrial sites, mostly toxic wastes dumps, which may be destroyed not only by hyperflooding but also by weather extremes due to their poor protection.

The most dangerous among those sites are the radioactive dumps in the riverbank city of Dniprodzerzhynsk. The now-defunct Prydniprovsky Chemical Plant (PHZ) has been enriching uranium ores for Soviet nuclear program from 1948 till 1991, preparing the so-called Yellowcake substance. Its processing wastes are now stored in 9 open-air dumping grounds containing about 36 million tones of sand-like low-radioactive material, occupying area of 2,5 million square meters. The sites, improperly constructed from the very beginning, have been abandoned by industry long ago and remain in very poor condition. The top concern is the dumps’ closeness to both the Dnieper River and city residential areas.

According to government experts, the dams separating the grounds from soil water are already leaking, causing the pollution of Dnieper basin. It is believed that further deterioration of the dams in itself may cause a devastating radioactive mudslide. Ukrainian government is now acquiring control over the grounds and seeking international aid in projects, aimed at securing and gradual re-processing PHZ wastes. Recently, the International Atomic Energy Agency has evaluated the condition of the sites and is considering a major observation and aid mission to Dniprodzerzhynsk.  Ukraine’s uranium ore mines (which products have been enriched by PHZ) are also situated in Dnipropetrovsk Oblast in proximity of the Dnieper and its tributaries, particularly in the town of Zhovti Vody.

The Zaporizhzhia Nuclear Power Plant is also situated within miles from the Dnieper, in the left-bank city of Enerhodar. In case of a hyperflooding, hazardous materials from these and many other industrial sites may be poured on surrounding territories and the Black Sea. On May 30, 2006 researcher Vasily Kredo alerted the nation again, calling the Kiev Reservoir “the most dangerous place on the planet”. The researcher says there is a remote possibility of a “radioactive tsunami from the Kiev Sea” that would kill 15 million and make Ukraine “never revive again”.