A dense cloud of dust swept across southern Afghanistan and Pakistan on December 20, 2011.  The dust was largely hemmed in by the Makran and Sulaiman Ranges in Pakistan with only a few wisps reaching south over the Arabian Sea. By the time Aqua MODIS flew over just over three hours later, the storm had reached the coast. The dust storm continued on December 21.

The storm is being propelled by strong winds from the north. The winds picked up dust from the dry lakebeds in the Hamun wetlands on the border between Afghanistan and Iran. Concentrated plumes of dust rise from the pale wetlands to become a more diffuse cloud in the south and east. Dry lakebeds and wetlands are among the most common sources of dust in the world. 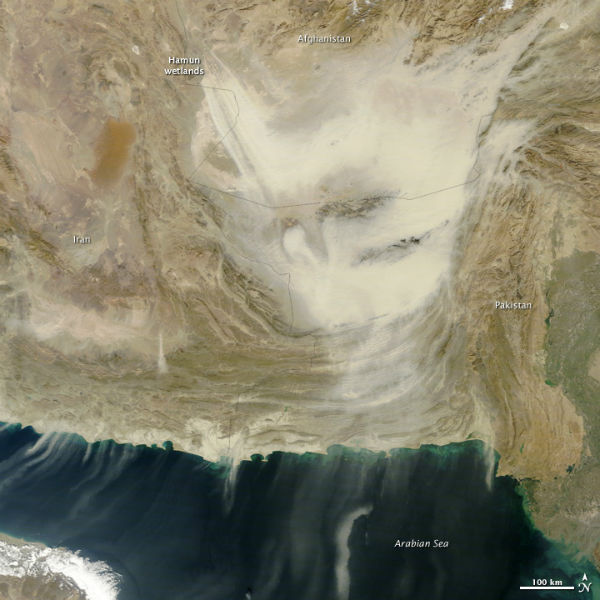 Moderate Resolution Imaging Spectroradiometer (MODIS) took this image from the Terra satelliteDust storms can happen any time of the year in Afghanistan. On average, Afghanistan experiences blowing dust one to two days per month in the winter and six days per month at the height of the summer. Zabon, an Iranian city located near the border in the Hamun wetlands, reports 81 dust storms per year. Blowing dust poses a hazard to transportation. Low visibility closes roads and airports. (Earth Observatory)