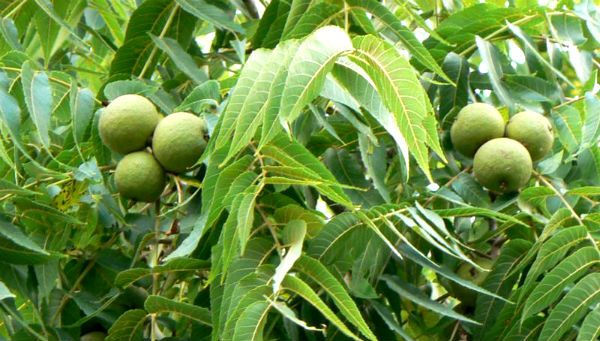 Drier summers and extreme weather events considered possible as the climate changes would be especially troublesome – possibly fatal – for walnut trees, according to research at Purdue University. Researchers now suspect and predict that climate change is going to have a real impact on walnuts. We may see some type of decline of the species. Specifically, walnuts would have difficulty tolerating droughts that could be associated with a changing climate.

Douglass Jacobs, a professor of forestry and natural resources, and Martin-Michel Gauthier, a research scientist in the Ministry of Natural Resources in Quebec, studied the physiology of walnut trees over five years and they found that the trees are especially sensitive to particular climates. They findings were published in the December issue of Annals of Forest Science.

Researchers point that changes in moisture could restrict walnut’s ability to survive without irrigation considering that almost all climate change models predict that climates will become drier. Walnuts are also sensitive to cold, so much so that they have developed a defense mechanism against late frosts. Walnut trees don’t begin sprouting leaves until almost a month after other trees in the spring. That defense mechanism could be compromised by extreme weather events associated with climate change scenarios. Late spring frosts after walnuts have developed leaves could kill trees. The trees would basically shut down.

In California, more than 500,000 tons of walnuts were sold for more than $1 billion in 2010, according to the U.S. Department of Agriculture. In Indiana, black walnuts are prized for their wood. Charles Michler, project leader of Purdue’s Hardwood Tree Improvement and Regeneration Center, said walnuts accounted for as much as 15 percent of the logs sold in Indiana at a value of about $11 million. Walnut is probably the most important species in the hardwood products industry today according to Michler.

The center has a walnut breeding program that is attempting to identify trees that can be used in different climates. One goal is to find walnuts that may be able to stand up to the heat or cold stresses that trees could be subject to in a changing climate. The center is looking at seeds that come from mature trees to see if the seeds have attained defense mechanisms against changes already seen in climate. Researchers points the trees that are mature now may be affected by climate change, but the seeds they produce may be adapting through genetic changes. (TerraDaily)

Black walnut plantings can be made to produce timber, nuts, or both timber and nuts. Patented timber type trees were selected and released from Purdue university in the early 1990’s. These trees have been sporadically available from nurseries. Varieties include Purdue #1 which can be used for both timber and nut production though nut quality is poor compared to varieties selected specifically as nut producers.

Juglans is a plant genus of the family Juglandaceae, the seeds of which are known as walnuts. They are deciduous trees, 10–40 meters tall (about 30–130 ft), with pinnate leaves 200–900 millimetres long (7–35 in), with 5–25 leaflets; the shoots have chambered pith, a character shared with the wingnuts (Pterocarya), but not the hickories (Carya) in the same family. The 21 species in the genus range across the north temperate Old World from southeast Europe east to Japan, and more widely in the New World from southeast Canada west to California and south to Argentina. Walnuts are light-demanding species that benefit from protection from wind. Walnuts are also very hardy against drought. The leaves and blossoms of the walnut tree normally appear in spring. The male cylindrical catkins are developed from leafless shoots from the past year; they are about 10 cm in length and have a large number of little flowers. Female flowers appear in a cluster at the peak of the current year’s leafy shoots

Scientists are not yet certain whether walnuts act as a cancer chemopreventive agent, an effect, which may be a result of the fruit’s high phenolic content, antioxidant activity, and potent in-vitro antiproliferative activity. Compared to certain other nuts such as almonds, peanuts and hazelnuts, walnuts (especially in their raw form) contain the highest total level of antioxidants, including both free antioxidants and antioxidants bound to fiber.  A 2010. study published in the Journal of the American College of Nutrition said that walnuts and walnut oil improve reaction to stress and suggested that consumption of walnuts increases fat oxidation and reduces carbohydrate oxidation without affecting total consumption, suggesting that walnut consumption may improve the use of body fat in overweight adults. Walnuts have been shown to decrease the endothelial dysfunction associated with a high-fat meal. Aged rats fed diets containing 2% to 6% walnuts showed reversal of age-associated motor and cognitive function, but a 9% walnut diet impaired performance-