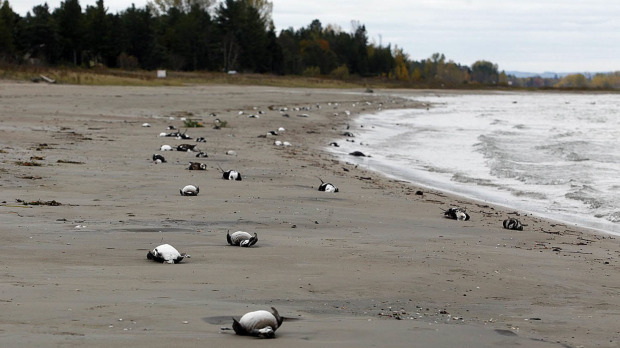 People in Ontario’s cottage country woke up to an alarming and worrisome sight Saturday: thousands of dead birds washed up on the shore of Lake Huron’s Georgian Bay. Ministry of Natural Resources is investigating after hundreds of birds and fish washed up on the shores of Georgian Bay near Wasaga Beach. Ontario Provincial Police Const. Peter Leon said that the number of dead birds is estimated to be between 5,000 and 6,000. 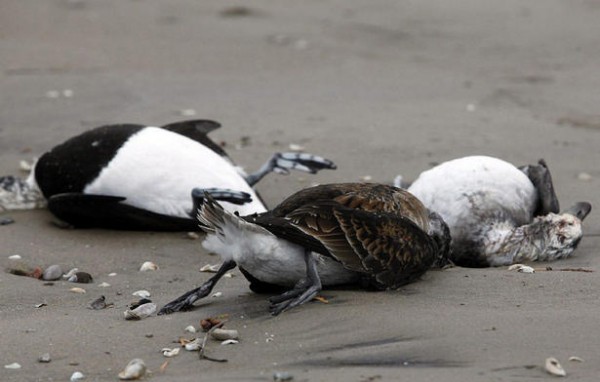 Police say that the wildlife is scattered along a nearly three-kilometre stretch north of Wasaga Beach. Locals said they noticed some dead fish on the beach a few weeks ago and a few dead birds earlier in September.

The culprit behind the “die-off,” locals and experts suspect, is type E botulism, a lethal neutoroxin. Botulism thrives in low oxygen environments often found in zebra mussel colonies. The Ministry said that more testing needs to be done. (CTV)

On Oct. 27, the Ministry of Natural Resources confirmed that the cause of death was Type E botulism.

Small scale “die-offs” occur annually around the Great Lakes, with the largest being in Lake Ontario in 2007, according to the ministry. Botulism is rarely dangerous to humans so long as food is properly handled and cooked, but dead birds and fish should not be eaten.

The birds were killed during their annual migration from breeding grounds in northern Canada to winter on Lake Ontario and the Atlantic Coast. As more species swing down through the area en route to wintering grounds, they too will be claimed by the waters around Wasaga Beach. 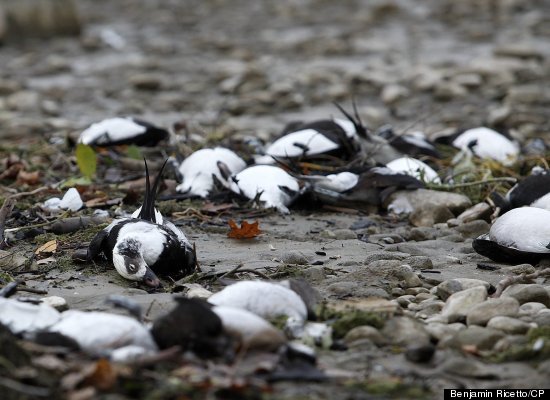 The naturally occurring bacterium that causes botulism has long existed in sediment at the bottom Lake Huron, but remained relatively harmless until the 1980s. It was during that decade when the zebra mussel and the round goby were inadvertently brought to the area in the ballast tanks of Great Lakes freighters.

The two invasive species act as filters for the lake water and accumulate dangerous amounts of the toxin. When fish eat the mussels or the goby, they are slowed down by the early stages of the poi—son, making them easy pickings for passing flocks of migrating predatory birds. After a few meals of contaminated seafood, the birds — be they gulls, ducks or even eagles — drown after their muscles seize up from the poison. (NationalPost)