The possibility of a huge plate-boundary earthquake amplified by simultaneous moves in two or more focal areas beneath Tokyo has been increasing since the Great East Japan Earthquake, according to the University of Tokyo’s Earthquake Research Institute.

The institute said that since the March 11 disaster, pressure on the tectonic plates beneath the city has changed and two or more focal areas may move simultaneously, resulting in a massive quake.

The institute intends to continue monitoring and assess the possibility of a huge earthquake.

The tectonic makeup of Tokyo and surrounding areas is complicated, with two ocean plates subducting below a land plate on which the Japanese archipelago is located.

The average number of quakes measured at magnitude 3 or more in the five years preceding the March 11 disaster was about eight a month.

The institute discovered that the number of small-scale plate-boundary quakes that are not felt by people has drastically increased following the March 11 earthquake.

Also, the preliminary observed number of magnitude-3 or larger plate-boundary quakes between March 11 and Aug. 20 rose about fourfold in an area 60 to 70 kilometers below northern Tokyo Bay. 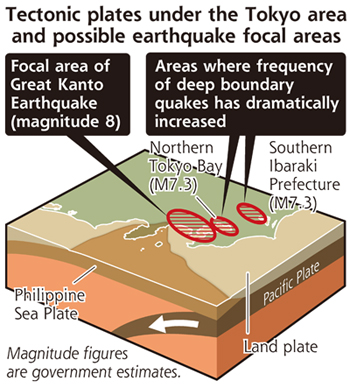 The number of inland quakes has not drastically increased, but the institute said the types of the quakes have clearly changed.

There have been huge quakes with shallow focal points below Tokyo and surrounding areas in the past. The 1923 magnitude-8 Great Kanto Earthquake occurred in southern Tokyo Bay.

The government’s Central Disaster Management Council has maintained that magnitude-8 quakes will not occur in the near future. But the Great East Japan Earthquake has largely changed conventional thinking about the region’s seismology.

Naoshi Hirata, a researcher at the institute and a member of the government’s Earthquake Research Commitxtee, said, “If there is drastic plate movement, there is no guarantee that the scale of the quake will be in line with the government’s prediction of up to magnitude 7.3.

“In addition to looking at the intervals of recurrence of Great Kanto Earthquake level quakes, it’s necessary to review the predictions,” he said.