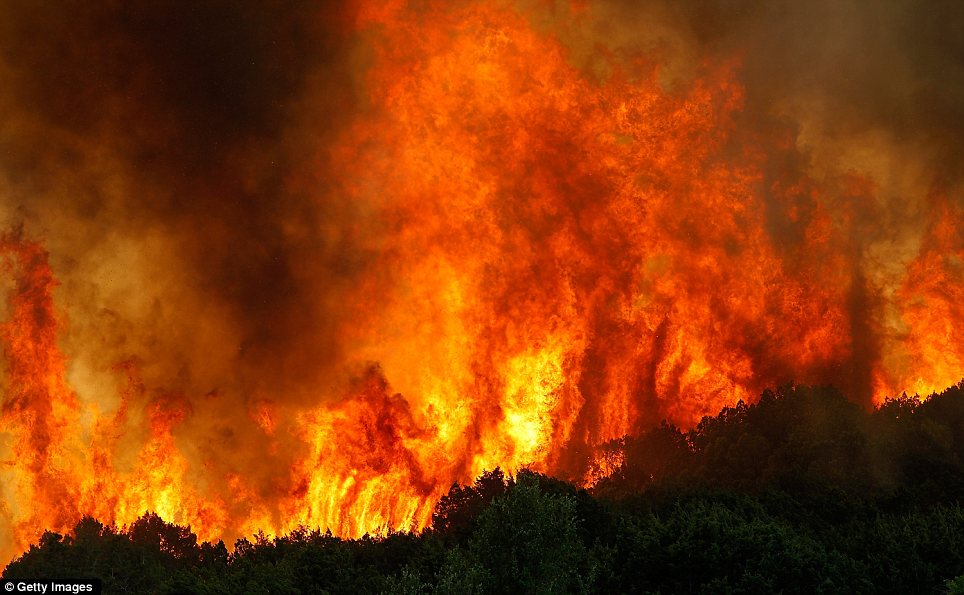 Nightmarish wildfires in Texas have scorched almost two million acres and destroyed nearly thousand homes. The fires have now been raging for more than a week in Texas, so far burning through 1.4 million acres of land and racking up more than $8million in containment costs.

And firefighters continue to battle some 22 separate blazes throughout the state, with some dangerously close to the Oklahoma border. Homes have been gutted, animals killed and hundreds of residents have been forced to leave their homes because of the advancing flames. One of the wildfires in PK West, Stephens County, increased in size by a staggering 87,238 acres in just 24 hours –  a 144 per cent increase. Possum Kingdom Lake is one of worst-damaged areas.

There is now growing fear that the Possum Kingdom Lake fire now wildfire racing through parched fields and woods  may get as far as Fort Worth – one of Texas’s largest cities, with nearly 750,000 residents. By yesterday, it had burned nearly  destroyed 30 homes and a church and forced hundreds of residents to flee the area.

The statewide drought, hot temperatures and gusting winds have made for ideal conditions that have allowed wildfires to ignite and spread quickly across much of the state.

The fires are so severe even prisons have been emptied in some towns. The drought-stricken state, which experienced its driest March on record, is desperately hoping for the rain that has been forecast in the coming days. Fire crews from 34 states have now joined the effort to bring the fires under control. 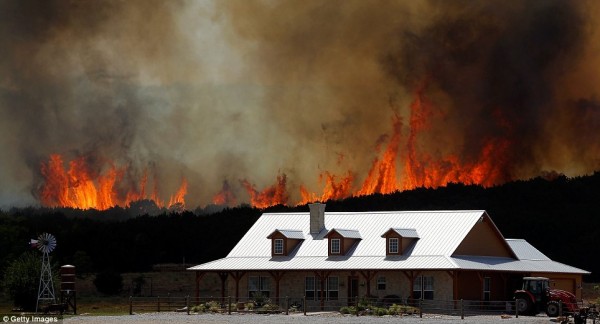 But the dry conditions in the neighbouring state of Oklahoma is also a worry for officials. Several large scale fires are currently mapped on the state line and two are in Oklahoma itself. The National Interagency Fire Center’s criteria for a large wildfire is 100 acres of timber or 300 acres of grass or brush.

Authorities ordered the 400 residents of Palo Pinto, about 50 miles west of Fort Worth, to leave the city yesterday evening because of the advancing flames, said Trooper Gary Rozzell of the Texas Department of Public Safety. The county’s jail inmates also were evacuated.

Several of the state’s largest cities have been on the alert since a weekend wildfire in Austin destroyed 10 homes after starting on the outskirts of town. Authorities say that fire started when homeless man, Michael Weathers, left his campfire untended and the wind blew an ember into the tinder-dry vegetation that can be found throughout the state.  The fire spread quickly and forced the evacuation of about 200 homes before crews were able to contain it. Weathers has since been charged with arson. 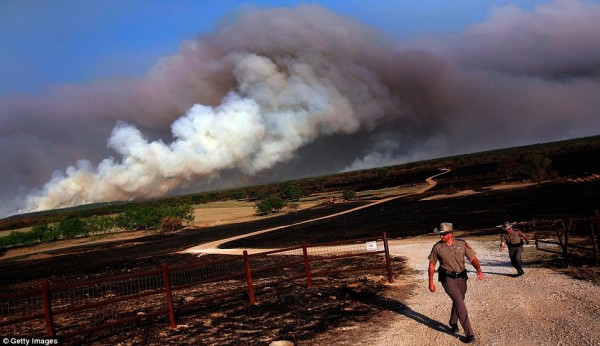 Weary firefighters had some reason for hope as rain and higher humidity levels were forecast for the rest of the week in parts of the state. A 20 to 30 per cent chance of rain was forecast for today and Thursday in the North Texas area. As the humidity levels rise, ‘even without the rain, conditions are looking more positive. Texas usually receives up to 15 inches of rain a year but in the last six months it has seen just 13-hundredths of an inch in the west of the state.

Some 11 new blazes broke out on Monday as firefighters continued to battle those that had been raging for days, with huge flames forcing residents to leave at least three towns. And on Sunday the Texas Forest Service actually started some fires themselves. These ‘controlled burns’ were to get rid of fuel on the mountain around McDonald Observatory. These aimed to starve the Rock House wildfire of fuel should it head back in that direction. (DailyMail) 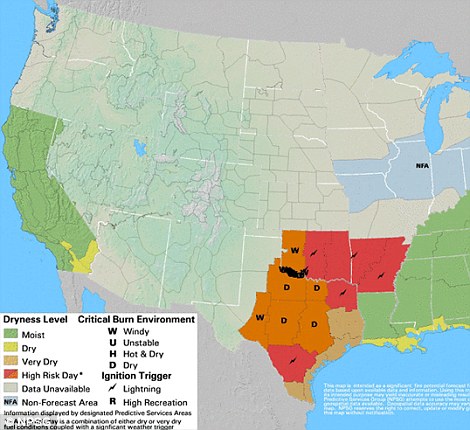