A strong cold front will begin to push across the Eastern U.S. on Friday and Saturday, March 11 and 12, 2022, bringing a wide range of hazards to the region. Heavy snow is expected from the eastern Great Lakes through the Northeast. Meanwhile, thunderstorms capable of damaging wind, isolated hail, and a few tornadoes are possible across parts of the Southeast to the Mid-Atlantic Friday night into Saturday.

More than 150 million people are forecast to see some type of impact as this potent late-winter storm rapidly strengthens along the Eastern Seaboard, bringing heavy rains, snow, ice and strong winds.

“A fast-moving and rapidly strengthening storm will bring intense weather and dramatic weather changes to the eastern half of the nation, with the most extremes in store for the Northeast,” AccuWeather Senior Meteorologist Dave Dombek said.1 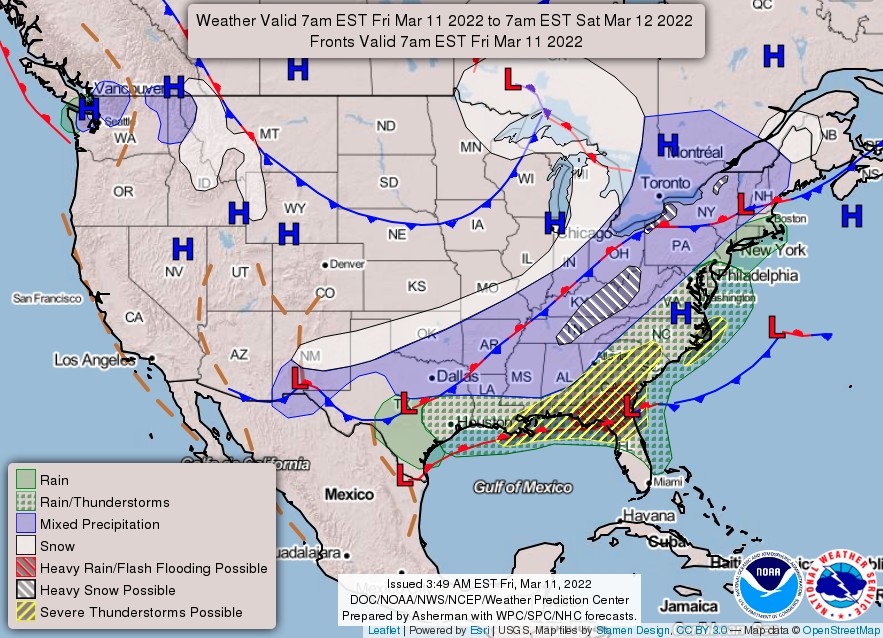 Snow rates greater than 2.5 cm (1 inch) per hour, combined with gusty winds will produce blowing and drifting snow and severely reduced visibility. This will create difficult to hazardous travel conditions.2

The greatest snow accumulations are likely across portions of the interior Northeast where totals in excess of 20 cm (8 inches) are likely. This could lead to scattered power outages due to the heavy and wet nature of the snowfall.

In the wake of the storm system, much colder air will spread across the Southeast and Mid-Atlantic with lows likely below freezing along the Gulf Coast and northern Florida Sunday morning.