Coronal rain is a phenomenon on the Sun that plays a key role in the mass cycle between the hot corona and cool chromosphere. In a new study, a team of researchers has proposed a new formation mechanism for coronal rain along open magnetic structures, showing that the higher-lying open structures reconnect with the lower-lying closed loops, forming a magnetic dip in the former.

Coronal rain usually occurs in post-flare loops and the non-flaring active region loops. It is classified into two categories– flare-driven and quiescent coronal rain, depending on its relation to the flare. Both form along structures that are magnetically closed.

In a new study, researchers proposed a new formation mechanism for coronal rain. In this mechanism, the higher-lying open structures link with the lower-lying closed loops, forming a magnetic dip in the former.

The plasma converges into the dip, resulting in the enhancement of plasma density, which triggers thermal instability. Thus, cooling and condensation of hot coronal plasma in the dip occurs. The cool condensation alls toward the solar surface as coronal rain.

In this new type of coronal rain, no flare was detected during the reconnection and condensation process. Thus, it belongs to the category of quiescent coronal rain.

"Whether the condensation facilitated by reconnection can still be observed on the disk, and how it performs, are open questions," co-author Hardi Peter added, a professor from the Max Planck Institute for Solar System Research. 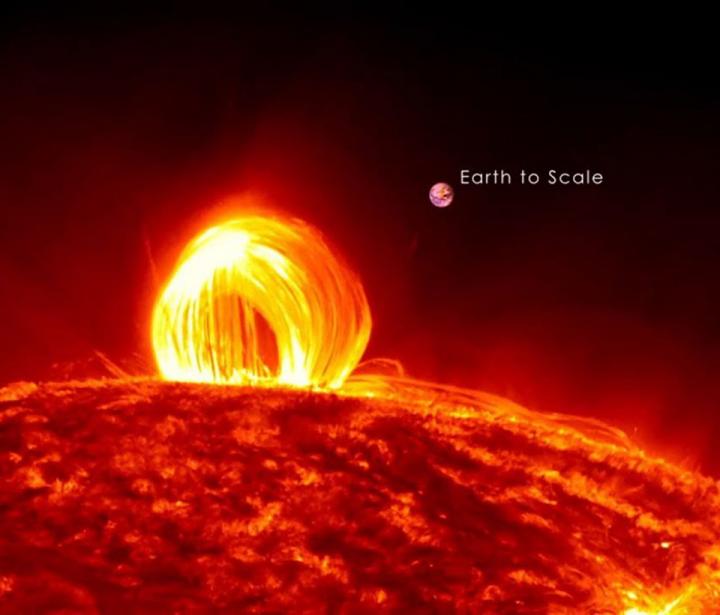 "The event presented is important for understanding the global picture of condensation formation in the solar atmosphere and the combined observations bring a very interesting means to analyze this type of coronal condensation events," the reviewer of the paper wrote.

Li added, "If only the on-disk observations are available, the relation between the condensations and reconnection, shown clearly by the off-limb observations, could not be identified. We propose that some on-disk condensation events seen in the transition region and chromospheric lines could be facilitated by interchange reconnection."

Coronal condensation and rain are a crucial part of the mass cycle between the corona and chromosphere. In some cases, condensation and subsequent rain originate in the magnetic dips formed during magnetic reconnection. This provides a new and alternative formation mechanism for coronal rain. Until now, only off-limb, rather than on-disk, condensation events during reconnection have been reported. In this paper, employing extreme-ultraviolet (EUV) images of the Solar Terrestrial Relations Observatory (STEREO) and Solar Dynamics Observatory (SDO), we investigate the condensations facilitated by reconnection from 2011 July 14–15, when STEREO was in quadrature with respect to the Sun–Earth line. Above the limb, in STEREO/EUV Imager (EUVI) 171 Å images, higher-lying open structures move downward, reconnect with the lower-lying closed loops, and form dips. Two sets of newly reconnected structures then form. In the dips, bright condensations occur in the EUVI 304 Å images repeatedly, which then flow downward to the surface. In the on-disk observations by SDO/Atmospheric Imaging Assembly (AIA) in the 171 Å channel, these magnetic structures are difficult to identify. Dark condensations appear in the AIA 304 Å images, and then move to the surface as on-disk coronal rain. The cooling and condensation of coronal plasma is revealed by the EUV light curves. If only the on-disk observations were be available, the relation between the condensations and reconnection, shown clearly by the off-limb observations, could not be identified. Thus, we suggest that some on-disk condensation events seen in transition region and chromospheric lines may be facilitated by reconnection.