A tropical storm just south of the equator in the southwestern Pacific Ocean on December 29, 2018, produced an unprecedented temperature of -111.2 °C (161.96 K / -168.1 °F), the lowest recorded on Earth, according to a recent scientific research paper. The temperature was recorded atop the thunderstorm clouds, with an altitude of more than 20.5 km (12.8 miles) above sea level.

In a new paper published in AGU's Geophysical Research Letters, researchers examined data gathered during a tropical storm in the southwestern Pacific in 2018.

The storm, which was a result of a deep convection event, pushed so high in the atmosphere that it smashed the record for the lowest temperature on Earth.

Convection is a process by which a warm fluid travels upward, while cooler fluid falls beneath it. Huge storms are usually the result of warm surface air pushing high into the atmosphere, cooling rapidly, and forming thick clouds.

This event produces wind and rain, and other systems associated with thunderstorms, such as the presence of cooler air on the surface.

During the storm in 2018, conditions were perfect that when the hot air on the surface switched positions with the cooler air in the atmosphere, the warm air is pushed much higher than usual.

This is a process known as an overshoot, which results in the cloud tops becoming colder than what would usually be seen in a thunderstorm.

Overshooting tops indicate that a storm is particularly severe that it can cause hazardous weather. 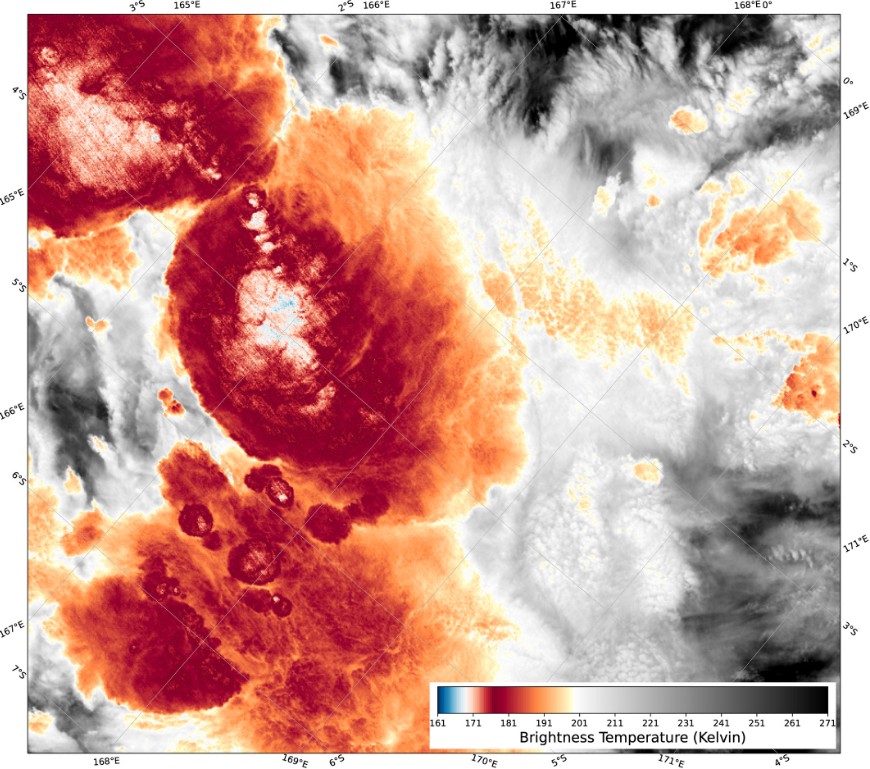 VIIRS I5 brightness temperatures (BTs) for 13:38 UTC on December 29, 2018. The cluster of particularly cold BTs is slightly to the left of the image center. VIIRS, Visible Infrared Imaging Radiometer Suite. Credit: AGU, Authors

The VIIRS sensor aboard the NOAA-20 satellite then registered -111 °C (-168 °F), which was a new record for storm cloud temperatures. The tops of the thunderstorm clouds reached an altitude of over 20.5 km (12.8 miles) above sea level.

"It's interesting that in this part of the world, the tropopause is actually getting warmer, so we might expect to see warmer clouds, not colder clouds, which likely means we're seeing more extreme storms as we're getting even bigger overshoots than we used to."

A map of all particularly cold brightness temperatures (BTs) recorded by the MODIS instrument aboard NASA's Aqua satellite between August 2004 and August 2020. The location of the cold BT discussed in this study is shown by the red star. Areas outside 30° North/South latitude are excluded, as no extreme cold BTs were recorded there. Credit: AGU, Authors

Earth‐orbiting satellites have long been used to examine meteorological processes. In the context of severe weather, brightness temperatures (BTs) at infrared wavelengths allow the determination of convective cloud properties. The anvils of cumulonimbus clouds, for example, typically produce BTs close to the tropopause temperature. Particularly severe storms generate overshoots that penetrate the stratosphere and are cooler than the anvil. In this study, we describe clustered storm overshoots in the tropical West Pacific on December 29, 2018 that resulted in the Visible Infrared Imaging Radiometer Suite (VIIRS) aboard NOAA‐20 measuring a temperature of 161.96K (−111.2°C), which is, to our knowledge, the coldest on record. We describe the local meteorological conditions, examine the VIIRS overpass that produced the cold temperature, compare VIIRS with other sensors that observed the region and, finally, analyze the historical context provided by two other satellite instruments to show that such cold temperatures may be becoming more common.