The Aviation Color Code for Grímsvötn volcano was raised from Green to Yellow on September 30, 2020. The last eruption of this volcano took place in 2011 — it was a large and powerful VEI 4 eruption. The average eruption frequency during the last 1 100 years is 1 eruption per 10 years.

According to the Icelandic Met Office, the volcanic activity at the volcano has been gradually increasing over time as indicated by several regularly monitored geophysical and geochemical parameters that are now above the known background level:

"In addition, the water height in the subglacial lake is comparable to the level prior to the floods in 2004 and 2010, increasing the likelihood of a flood in the coming months," IMO said in a statement released today.

"Multiple datasets now indicate that Grímsvötn volcano has reached a level of unrest, comparable to that observed prior to historic eruptions," it added.

Aviation Color Code Yellow does not mean that an eruption is imminent.

However, an eruption could be triggered by depressurization if the subglacial lake inside the caldera will drain and cause a flood or occur regardless, possibly with very weak precursory activity and short warning time, as seen in the eruption of 2011. 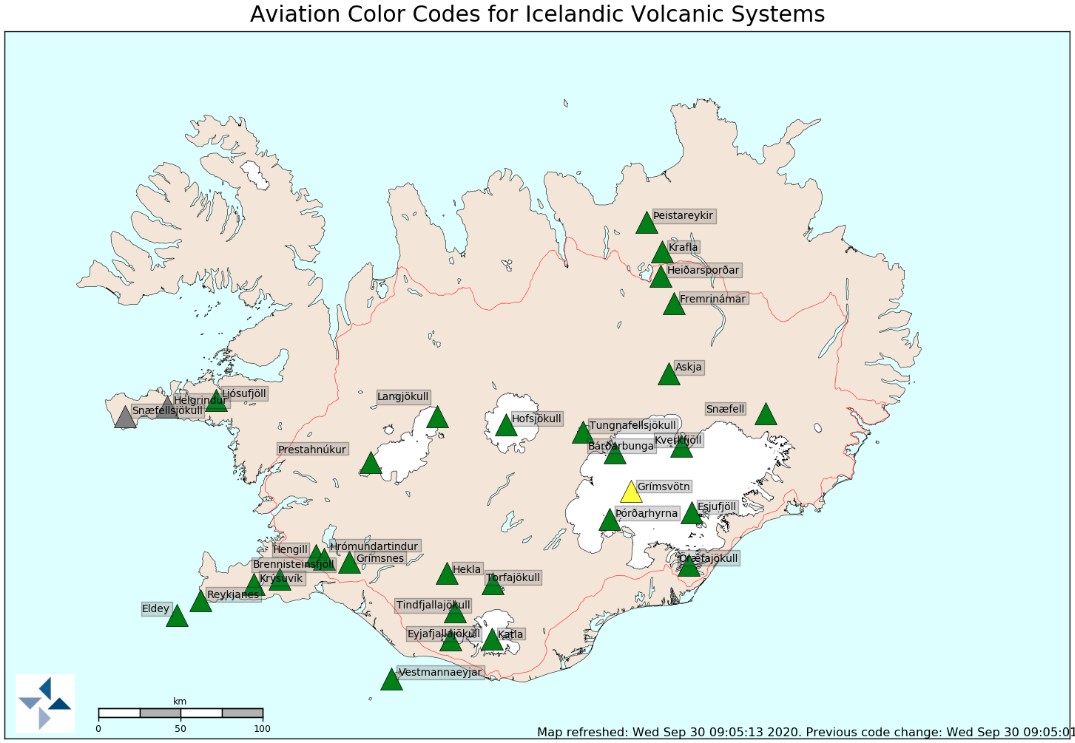 Because the Civil Protection meets regularly with IMO and is informed about the situation, there are currently no reasons to change the alert level of civil protection.

Ash from the volcano reduced visibility to about 50 meters (160 feet) in some places and made some areas as dark as night in the middle of the day. The ash plume also prompted the closure of Keflavik, Iceland’s largest airport.

In the past years, the Aviation Color Code has been changed several times for a few volcanoes in Iceland. The most recent ones have been for Reykjanes in January 2020, Öræfajökull in 2017, Katla in 2016, and Bárðarbunga in 2014-2015 in connection to the Holuhraun eruption.

The Aviation Color Code has been raised to orange/red on several occasions, with the most recent case during the last eruption in Bárðarbunga.

The 15 km3 (3.6 mi3) basaltic Laki lavas were erupted over a 7-month period from a 27 km (16.7 miles) long fissure system. Extensive crop damage and livestock losses caused a severe famine that resulted in the loss of one-fifth of the population of Iceland.