In a new study, an international team of scientists provided the first conclusive evidence directly correlating deep Earth's water cycles, magmatic productivity, and earthquake activity. Water and other volatiles that are cycled through the deep Earth have played a significant role in the evolution of our planet, including in the formation of continents, the concentration of mineral resources, and the distribution of volcanoes and earthquakes.

Subduction zones are the most important parts of the cycle– with high volumes of water going in and coming out, primarily through volcanic eruptions. Yet, there is little knowledge as to how much water is transported and its impact on natural hazards.

"As plates journey from where they are first made at mid-ocean ridges to subduction zones, seawater enters the rocks through cracks, faults, and by binding to minerals. Upon reaching a subduction zone, the sinking plate heats up and gets squeezed, resulting in the gradual release of some or all of its water," said Dr. George Cooper, the lead author and an honorary research fellow at the University of Bristol's School of Earth and Sciences.

"As water is released it lowers the melting point of the surrounding rocks and generates magma. This magma is buoyant and moves upwards, ultimately leading to eruptions in the overlying volcanic arc."

He further explained, "These eruptions are potentially explosive because of the volatiles contained in the melt. The same process can trigger earthquakes and may affect key properties such as their magnitude and whether they trigger tsunamis or not."

Professor Saskia Goes from the Imperial College London added, "Most studies have focused on subduction along the Pacific Ring of Fire."

"We expect this to be hydrated more pervasively and heterogeneously than the fast-spreading Pacific plate, and for expressions of water release to be more pronounced."

Cooper and the team collected data over two marine scientific cruises on the RRS James Cook, temporary deployments of seismic stations that recorded tremors beneath the islands, geological fieldwork, chemical and mineral studies of rock samples, and numerical modeling.

To trace the impacts of water along the length of the subduction zone, the scientists examined boron compositions and isotopes of melt inclusions. Boron fingerprints showed that the water-rich mineral serpentine is a dominant supplier of water to the central region of the Lesser Antilles. 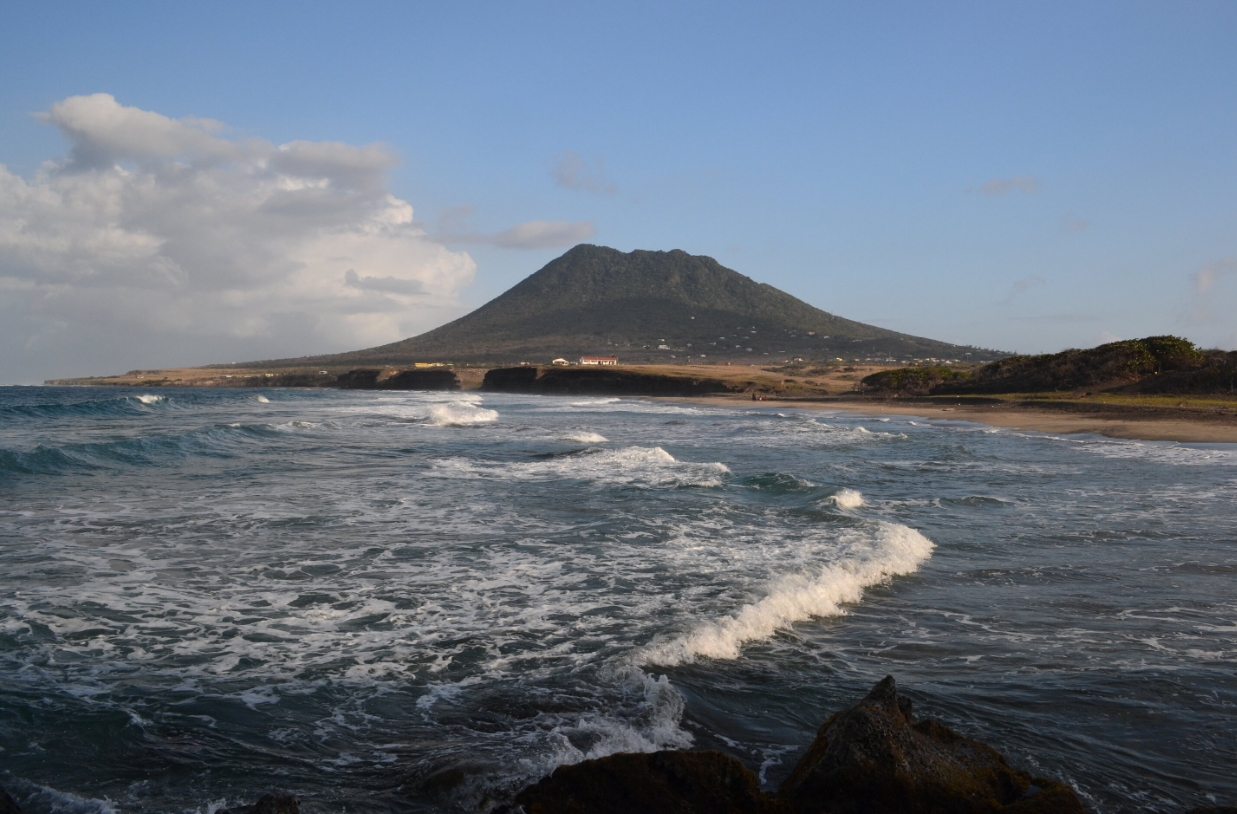 Quill, on the island of Statia. One of the islands in the Lesser Antilles. Image credit: Dr. George Cooper

"By studying these micron-scale measurements it is possible to better understand large-scale processes," said Professor Colin Macpherson from Durham University.

"Our combined geochemical and geophysical data provide the clearest indication to date that the structure and amount of water of the sinking plate are directly connected to the volcanic evolution of the arc and its associated hazards."

Professor Goes also explained, "The wettest parts of the downgoing plate are where there are major cracks (or fracture zones)."

"By making a numerical model of the history of fracture zone subduction below the islands, we found a direct link to the locations of the highest rates of small earthquakes and low shear wave velocities (which indicate fluids) in the subsurface."

The history of subduction of water-rich fracture zones may also answer why the central islands of the arc are the largest and why they have generated the most magma over geologic history.

"Our study provides conclusive evidence that directly links the water-in and water-out parts of the cycle and its expressions in terms of magmatic productivity and earthquake activity," Cooper stated.

"This may encourage studies at other subduction zones to find such water-bearing fault structures on the subducting plate to help understand patterns in volcanic and earthquake hazards."

Macpherson added, "In this research, we found that variations in water correlate with the distribution of smaller earthquakes, but we would really like to know how this pattern of water release may affect the potential– and act as a warning system– for larger earthquakes and possible tsunami."

Oceanic lithosphere carries volatiles, notably water, into the mantle through subduction at convergent plate boundaries. This subducted water exercises control on the production of magma, earthquakes, formation of continental crust and mineral resources. Identifying different potential fluid sources (sediments, crust and mantle lithosphere) and tracing fluids from their release to the surface has proved challenging1. Atlantic subduction zones are a valuable endmember when studying this deep water cycle because hydration in Atlantic lithosphere, produced by slow spreading, is expected to be highly non-uniform2. Here, as part of a multi-disciplinary project in the Lesser Antilles volcanic arc3, we studied boron trace element and isotopic fingerprints of melt inclusions. These reveal that serpentine—that is, hydrated mantle rather than crust or sediments—is a dominant supplier of subducted water to the central arc. This serpentine is most likely to reside in a set of major fracture zones subducted beneath the central arc over approximately the past ten million years. The current dehydration of these fracture zones coincides with the current locations of the highest rates of earthquakes and prominent low shear velocities, whereas the preceding history of dehydration is consistent with the locations of higher volcanic productivity and thicker arc crust. These combined geochemical and geophysical data indicate that the structure and hydration of the subducted plate are directly connected to the evolution of the arc and its associated seismic and volcanic hazards.