Desert locust plague situation remains extremely alarming as new swarms continue forming and invading parts of Africa and the Middle East. The United Nation's Food and Agriculture Organization (FAO) said that the outbreak poses an unprecedented threat to food security and livelihoods at the start of the upcoming crop season.

The situation remains extremely alarming in the Horn of Africa, specifically Kenya, Ethiopia and Somalia where widespread breeding is in progress and new swarms are starting to form, representing an unprecedented threat to food security and livelihoods at the beginning of the upcoming cropping season, FAO said in Desert Locust situation update published March 17, 2020.

The desert locusts that have been wreaking havoc in massive swaths of East Africa, Pakistan, and Iran are expected to further spread and worsen as new swarms started to form in the Horn of Africa.

According to FAO's report, the countries predicted to be affected the worst are Kenya, Ethiopia, Somalia, and Sudan. Other countries such as Eritrea, Egypt, Yemen, Saudi Arabia, and Oman also have cases. 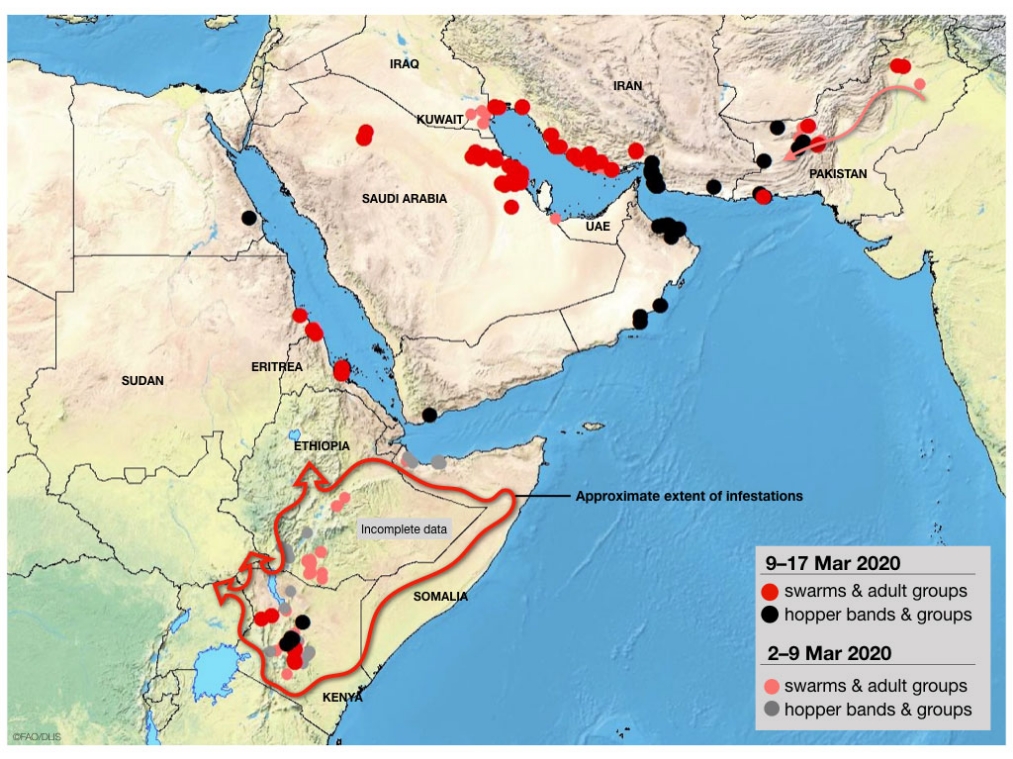 In Kenya, hopper bands continue to develop and form an increasing number of first-generation immature swarms in northern and central counties. Further concentration are expected in Marsabit and Turkana. Aerial and ground control operations continue.

While there are no new information coming from Ethiopia, hopper bands continue to form within a widespread area of Oromiya and SNNPR regions, including the Rift Valley. A new generation of immature swarms are likely to have started forming in some areas. Aerial and ground control operations continue.

Hopper bands forming on the southern coast near Aden, Yemen where control was carried out. The situation is not well known in other areas where breeding is likely underway.

The situation is under control in the following countries: Sudan, Eritrea, Egypt, Saudi Arabia, and Oman.

In Sudan, two immature swarms appeared on the southern coast of the Red Sea on March 14. Scattered adults along parts of the coast.

Conditions are drying out on the central and northern coast of Eritrea. Control operations continue against groups of late instar hoppers and immature adults on the Buri Peninsula and in the Dahlak Islands.

In Egypt, late instar hopper groups are treated at one place on the Red Sea coast in the southeast.

Control operations against one mature swarm and groups of laying adult near the Persian Gulf between Al Hofuf and Kuwait in Saudi Arabia, and a few mature groups in the northern interior south of Al Jawf. 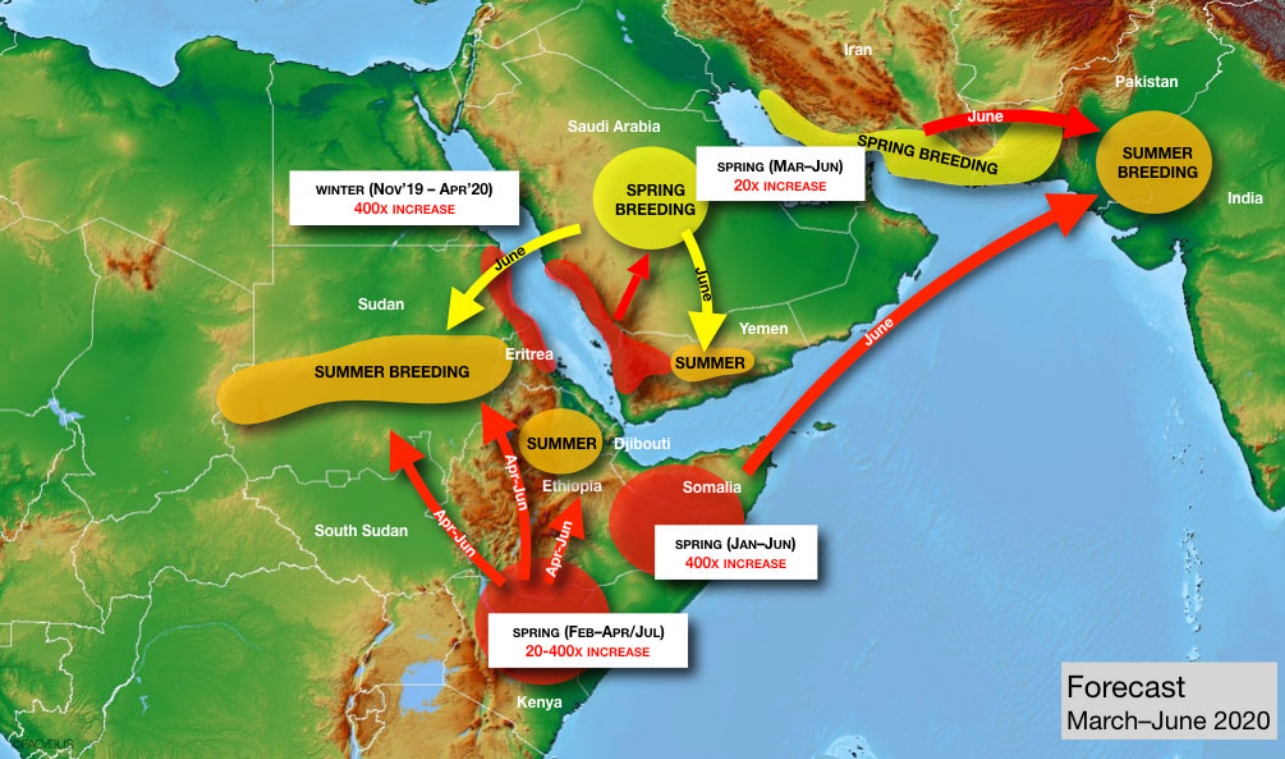 The present widespread breeding in Kenya, Ethiopia, and Somalia continues to pose unprecedented threats to food security and livelihoods, said FAO on the Locust Watch website.

FAO has warned about these threats last month while appealing for prompt support, calling on international groups and organizations to help in combatting the swarms. 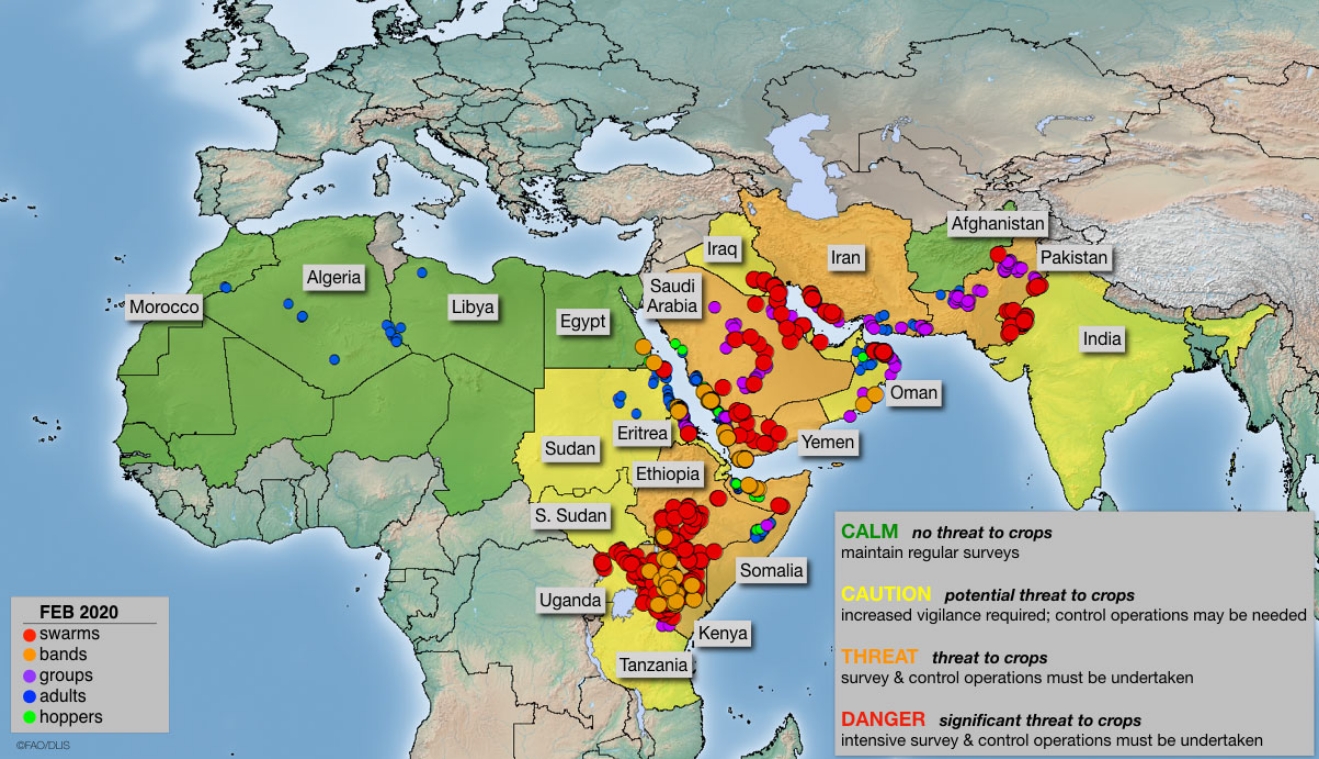