A massive and intensifying dust storm, one of the most intense ever observed on Mars, is affecting the Red Planed since May 30, 2018. The storm is growing rapidly and is likely to go, or has already gone, global.

On June 10, the storm covered more than 41 million km2 (15.8 million mi2), according to NASA's JPL. This is about the area of North America and Russia combined or more than a quarter of the surface of Mars.

However, due to its rapid intensification, some astronomers say the dust storm is likely to go, or has already gone, global. 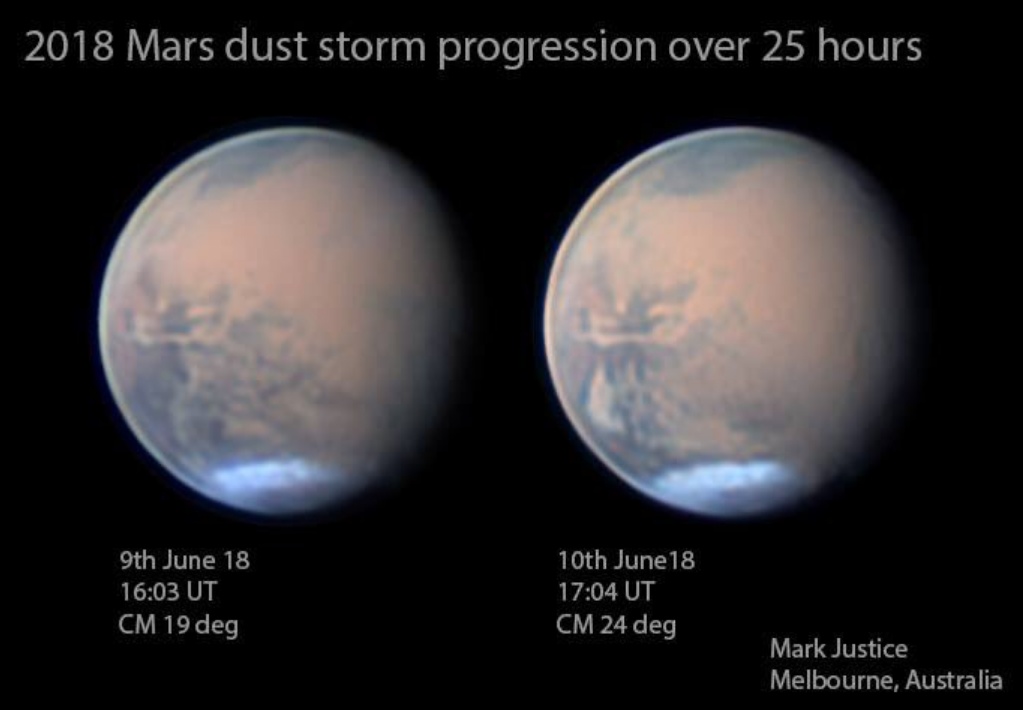 It has blocked out so much sunlight, it has effectively turned day into night for NASA's Opportunity rover, which is located near the center of the storm, inside Mars' Perseverance Valley. As a result, Opportunity's power levels have dropped significantly by June 6, requiring it to shift to minimal operations and temporarily cease science operations.

These two views from NASA’s Curiosity rover, acquired specifically to measure the amount of dust inside Gale Crater, show that dust has increased over three days from a major Martian dust storm. The left-hand image shows a view of the east-northeast rim of Gale Crater on June 7, 2018 (Sol 2074); the right-hand image shows a view of the same feature on June 10, 2018 (Sol 2077). The images were taken by the rover’s Mastcam. Credit: NASA/JPL-Caltech/MSSS

NASA engineers attempted to contact the Opportunity on June 12 but did not hear back from the nearly 15-year old rover. The team is now operating under the assumption that the charge in Opportunity's batteries has dipped below 24 volts and the rover has entered low power fault mode, a condition where all subsystems, except a mission clock, are turned off. The rover's mission clock is programmed to wake the computer so it can check power levels.

If the rover's computer determines that its batteries don't have enough charge, it will again put itself back to sleep.

Due to an extreme amount of dust over Perseverance Valley, mission engineers believe it is unlikely the rover has enough sunlight to charge back up for at least the next several days.

The Martian dust storm blotting out the sun above Opportunity has continued to intensify. It blankets a quarter of the planet. All rover subsystems are off, except a mission clock, programmed to wake the computer to check power levels. Full status report: https://t.co/VwuuPwEpPA pic.twitter.com/rQvHDsxuQj

Science operations for Opportunity are temporarily suspended while it waits out a Martian dust storm. The dust in the atmosphere is impacting the amount of power generated by the rover’s solar panels. https://t.co/897LCuqMWX (Blue dot is approx location of rover.) pic.twitter.com/tY4aVfNyEz

On June 10, the storm's atmospheric opacity, the veil of dust blowing around, which can blot out sunlight, was already much worse than a 2007 storm that Opportunity survived and continued its operations after two weeks. The previous storm had an opacity level, or tau, somewhere above 5.5; this new storm had an estimated tau of 10.8 as of Sunday morning, June 10.

Participants in the teleconference will include: