Another seismic swarm is taking place at Yellowstone National Park since February 8, 2018. The swarm started with just a few events per day and intensified on February 15. Earthquake swarms like this account for more than 50% of the seismic activity at Yellowstone, the Yellowstone Volcano Observatory said, adding that no volcanic activity has occurred from any past such events.

The location of the swarm is approximately the same as the last summer's Maple Creek swarm, which included about 2 400 earthquakes during June – September 2017.

"In fact, the current swarm may be just a continuation of the Maple Creek swarm, given the ongoing but sporadic seismicity in the area over the past several months," YVO scientists said. 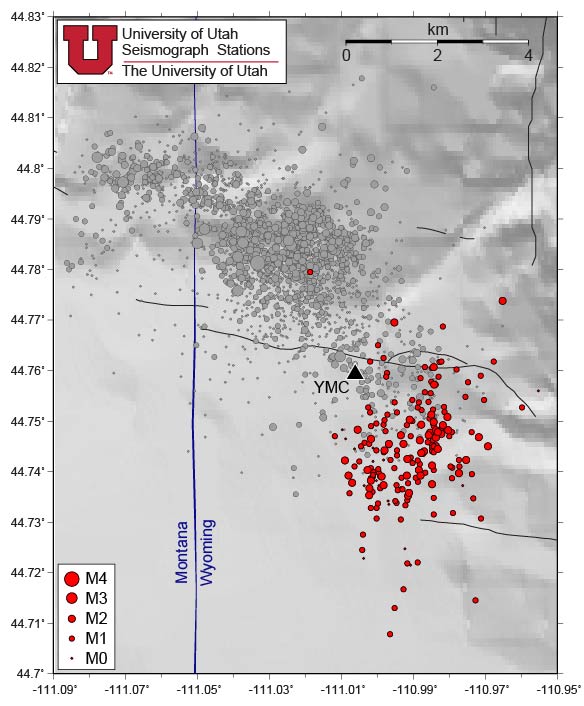 Close-up view of seismicity associated with the current swarm (red circles) compared to locations of the 2017 Maple Creek swarm (gray circles). YMC is the closest seismic station to the seismicity. Credit: USGS

The largest earthquake so far is M2.9 on February 18, followed bt M2.7 on February 21. More than 230 quakes were registered so far, all at about 8 km (5 miles) beneath the surface.

Earthquake swarms reflect changes in stress along small faults beneath the surface, and generally are caused by two processes: large-scale tectonic forces, and pressure changes beneath the surface due to accumulation and/or withdrawal of fluids (magma, water, and/or gas).

The area of the current swarm is subject to both processes, YVO explains. The largest historic earthquake in the region, the 1959 M7.3 Hebgen Lake event, was due to faulting that has its ultimate cause in the fact that the western United States is being pulled and stretched apart – this is what results in the "basin and range" topography of much of the region.

There is also a tremendous amount of fluid in the subsurface, including hydrothermal water and gases that come to the surface at nearby Norris Geyser Basin – the hottest thermal area in Yellowstone National Park. 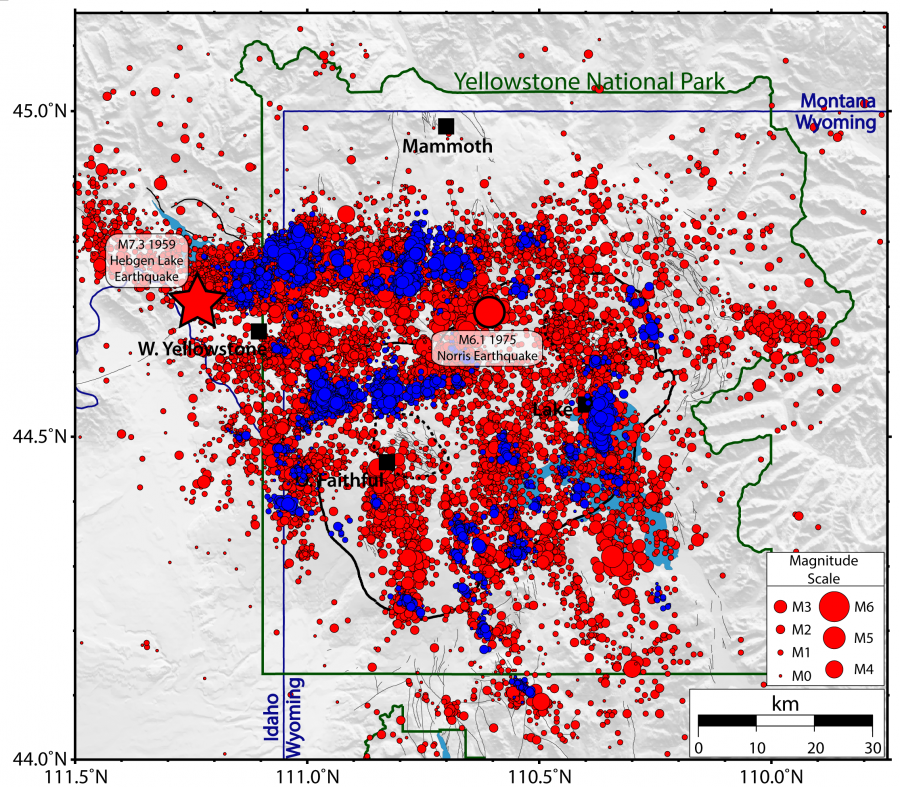 Map of Yellowstone earthquakes as located by the University of Utah Seismograph Stations from 1973 – 2017. Red circles are all quakes, and blue circles are earthquakes that were part of swarms. Credit: USGS

"The current and past earthquake swarms reflect the geology of the region, which contains numerous faults, as well as fluids that are constantly in motion beneath the surface. This combination of existing faults and fluid migration, plus the fact that the region is probably still 'feeling' the stress effects of the 1959 earthquake, contribute to making this area a hotbed of seismicity and swarm activity," the observatory said.

While it may seem worrisome, the current seismicity is relatively weak and actually represents an opportunity to learn more about Yellowstone, it added. "It is during periods of change when scientists can develop, test, and refine their models of how the Yellowstone volcanic system works."

The earthquakes, too, serve as a reminder of an underappreciated hazard at Yellowstone – that of strong earthquakes, which are the most likely event to cause damage in the region on the timescales of human lives. As recently as 1975 there was a M6.5 event in the area of Norris Geyser Basin.