Using more than half a century of observations, Japanese astronomers have discovered that the microwaves coming from the Sun at the minimums of the past five solar cycles have been the same each time, despite large differences in the maximums of the cycles.

In Japan, continuous four-frequency solar microwave observations (1, 2, 3.75 and 9.4 GHz) began in 1957 at the Toyokawa Branch of the Research Institute of Atmospherics, Nagoya University. In 1994 the telescopes were relocated to NAOJ Nobeyama Campus, where they have continued observations up to the present. 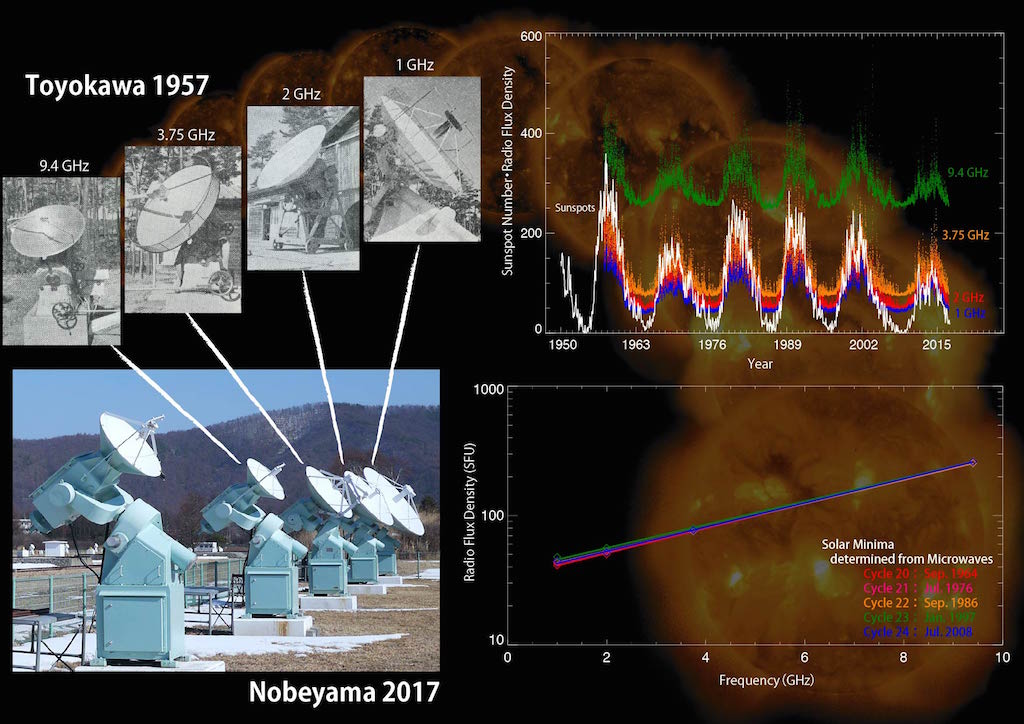 A research group led by Masumi Shimojo (Assistant Professor at NAOJ Chile Observatory), including members from Nagoya University, Kyoto University, and Ibaraki University, analyzed the more than 60 years of solar microwave data from these telescopes. They found that microwave intensities and spectra at the minimums of the latest five cycles were the same every time. In contrast, during the periods of maximum solar activity, both the intensity and spectrum varied from cycle to cycle.

Masumi Shimojo explains that, "Other than sunspot observations, uniform long-term observations are rare in solar astronomy. It is very meaningful to discover a trend extending beyond a single solar cycle. This is an important step in understanding the creation and amplification of solar magnetic fields, which generate sunspots and other solar activity."

Microwaves are another indicator of solar activity. Microwaves have the advantage that, unlike sunspots, they can be observed on cloudy days. Also, monitoring multiple frequencies of microwaves makes it possible to calculate the relative strength at each frequency (this is called the spectrum).

This research was published in the Astrophysical Journal on October 10, 2017.