The center of record-breaking Category 3 Hurricane "Ophelia" is expected to pass to the southeast of the Azores around 00:00 UTC on October 15, 2017 and then head toward Ireland and the United Kingdom. Ophelia is expected to be a powerful extratropical cyclone with hurricane force winds Monday while it moves near Ireland and the United Kingdom. Direct impacts from wind and heavy rain in portions of these areas are likely, along with dangerous marine conditions.

Ophelia is now a major hurricane, the farthest east (26.6°W) an Atlantic major hurricane has existed on record. It is also the 6th major hurricane of 2017 Atlantic hurricane season, tied with 1993, 1961, 1964 and 2004 for most major hurricanes through October 14, according to CSU meteorologist Dr. Philip Klotzbach. In addition, Ophelia is the 10th consecutive Atlantic named storm to reach hurricane status, tying the all-time record set in 1878 and equaled in 1886 and 1893.

This motion is expected to continue through Sunday, October 15 with a turn toward the NNE thereafter. On the forecast track, the core of Ophelia will pass to the south and southeast of the southeastern Azores within the next 12 hours.

Tropical-storm-force winds are possible throughout the Azores beginning this afternoon or tonight, primarily due to an approaching cold front, NHC said. The system is expected to produce total rain accumulations of 25.4 to 76.2 mm (1 to 3 inches) over the central and southeastern Azores through Saturday night. 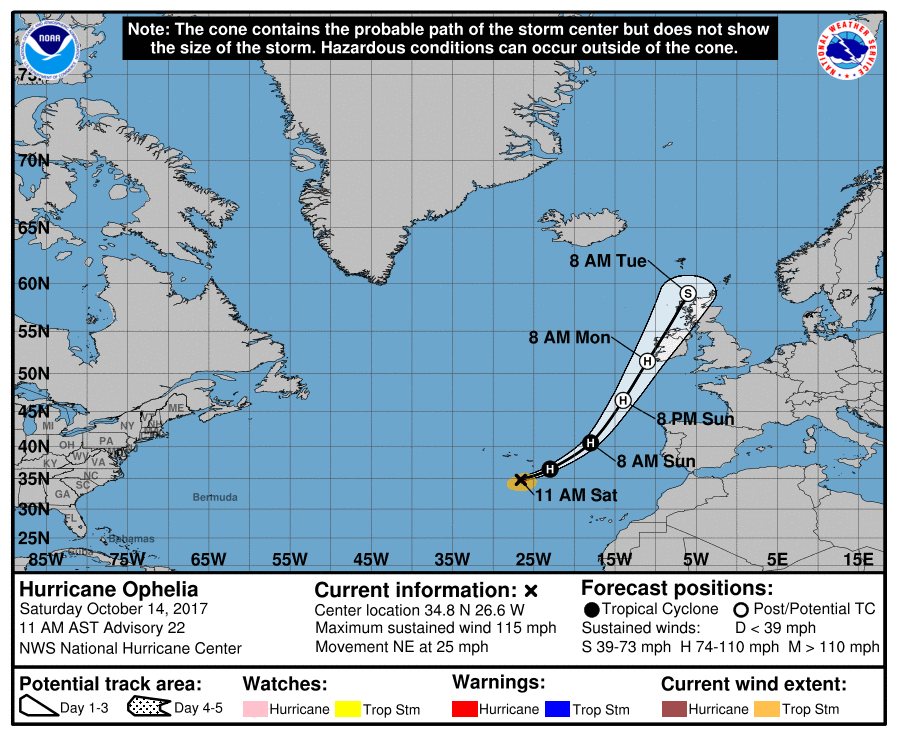 During the past few hours, Ophelia's satellite presentation has improved significantly. The eye has become even more distinct with a temperature of 16 °C (60.8 ° F), and has been surrounded by very deep convection, NHC's forecaster Avila notes.

Ophelia is a quite intense and rare hurricane for its location in the northeastern Atlantic, Avila said 15:00 UTC today.

Increasing shear and cold waters will soon begin to impact the system, and the hurricane should begin to acquire extratropical characteristics in about 36 hours or sooner.

Although some weakening is anticipated, Ophelia is expected to reach the British Isles as a powerful extratropical cyclone with hurricane force winds. Dissipation is forecast in about 4 days after the system moved over these Isles. 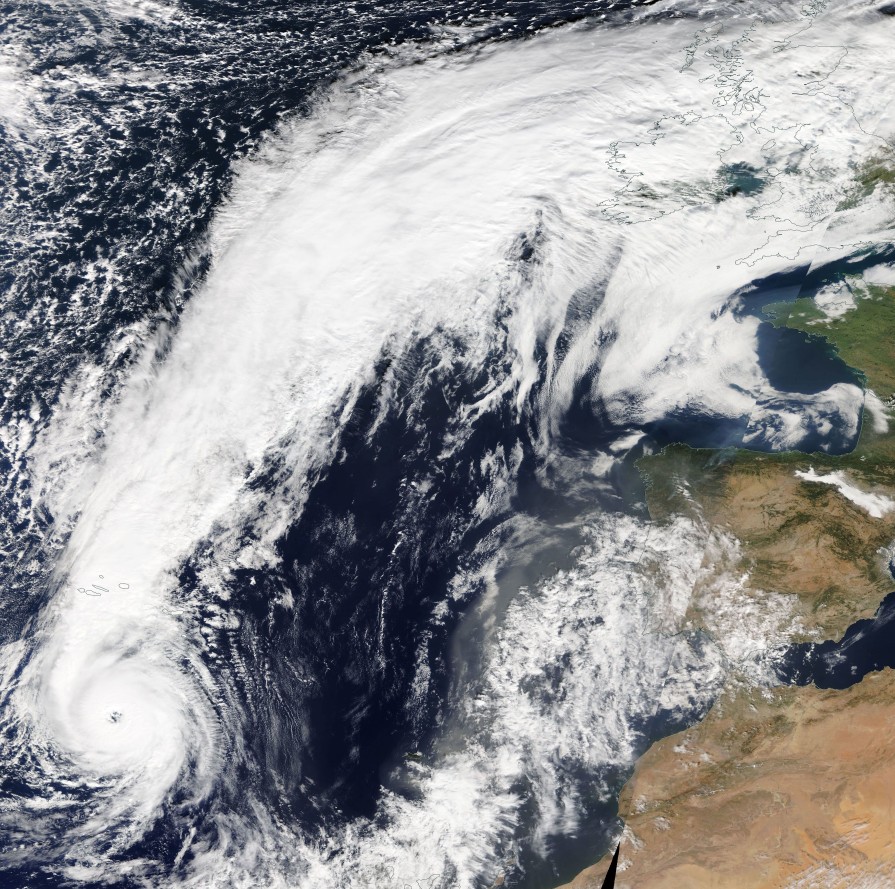 Given that Ophelia is forecast to become extratropical, the wind field should expand, resulting in impacts over portions of the British Isles regardless of its exact location or strength.

Although the center of Ophelia is not forecast to reach Ireland or the UK for another couple of days, wind and rains will arrive well in advance of the cyclone center. Individuals in those locations should consult products from their local meteorological service for more information on local impacts.

The exceptionally active 2017 Atlantic hurricane season is likely the costliest on record, with a preliminary total of over US$186.8 billion in damages, nearly all of which was due to three of the major hurricanes of the season – Harvey, Irma, and Maria.

The season is also one of only six years to feature multiple Category 5 hurricanes and the only season on record in which three hurricanes each had an ACE of over 40: Irma, Jose, and Maria.

The season officially began on June 1 and will end on November 30.

As we already said, there is still plenty of time for more records.