The results of the study reveal how snow, rain, snowmelt and runoff – as well as water changes related to agriculture – alter stress on regional faults, with seismic consequence, in some cases.

Stress changes on or near fault lines can drive seismic activity. Such changes may be caused by myriad phenomena, including variations in fluid pore pressure.

Here, Christopher Johnson and colleagues wanted to further explore a role for alternating wet and dry cycles in altering ground stress, and ultimately, in driving tremors.

They compared seasonal changes in ground stress estimated from GPS data from 2006 to 2014 to California earthquake rates between these years, finding that slight changes in stress to the ground associated with water and snow accumulation, snow melt, runoff, or irrigation for agriculture did influence earthquake likelihood.

In the San Andreas fault system, for example, conditions for quakes were more favorable for faulting during the dryer summer months, the authors say. 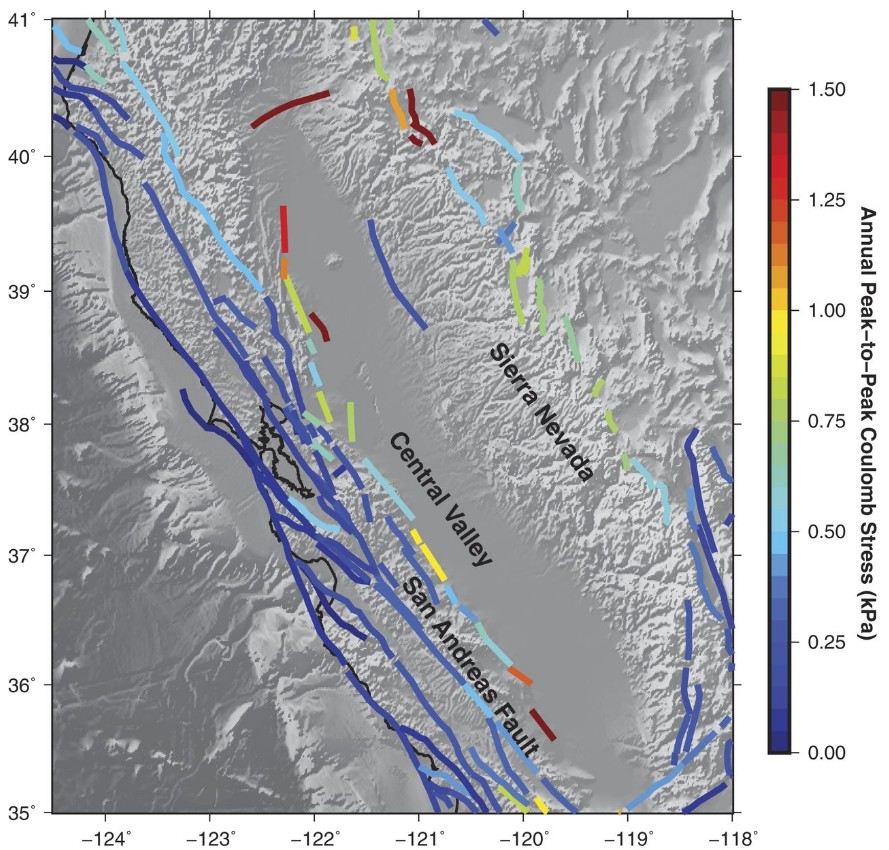 Along the Eastern California Shear Zone faults to the east of the Sierra Nevada, meanwhile, quakes were more likely during the wet winter months.

Establishing what controls the timing of earthquakes is fundamental to understanding the nature of the earthquake cycle and critical to determining time-dependent earthquake hazard. Seasonal loading provides a natural laboratory to explore the crustal response to a quantifiable transient force. In California, water storage deforms the crust as snow and water accumulates during the wet winter months. We used 9 years of global positioning system (GPS) vertical deformation time series to constrain models of monthly hydrospheric loading and the resulting stress changes on fault planes of small earthquakes. The seasonal loading analysis reveals earthquakes occurring more frequently during stress conditions that favor earthquake rupture. We infer that California seismicity rates are modestly modulated by natural hydrological loading cycles.