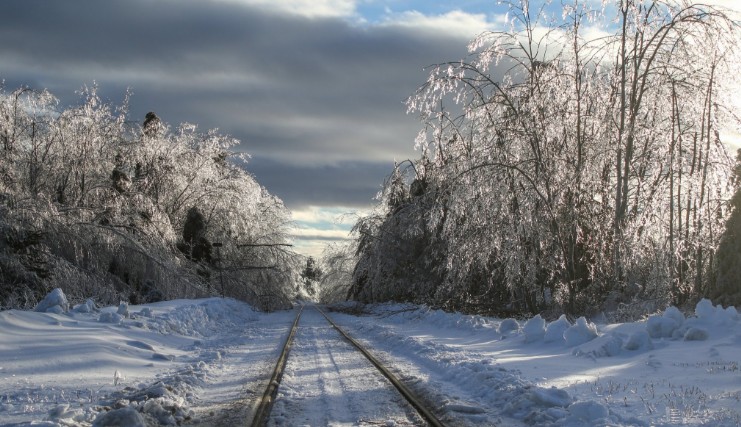 A devastating ice storm hit Canada's New Brunswick province last week leaving at least 2 people dead and 133 000 households without power. As of Monday afternoon, January 30, there are still 18 000 homes without power, including 15 635 in northeastern New Brunswick. About 200 members of the Canadian Armed Forces were sent to Acadian Peninsula today as part of the emergency response.

The storm started late Tuesday, January 24, 2017, over southwestern areas and spread northeastward during Wednesday, wreaking havoc on the roads, trees and power poles. The Moncton area and Acadian Peninsula were hardest hit.

N.B. Power said yesterday that the damage to the power infrastructure is much greater than anticipated. "About 350 and 400 poles will need to be replaced in hardest-hit areas, and this is a slow and arduous job in these conditions," they said in a statement.

46 warming centers have been set up for residents without power across the province. For some, power outages lasted for days.

At the peak of the outages Wednesday, more than 130 000 homes lost electricity. As of Monday morning, January 30, there were still 21 000 homes without power, most of them located on the hard-hit Acadian Peninsula.

Only Arthur in 2014 had more power outages than this week’s ice storm in #NBStorm. At peak over 130,000 were without power (Diane Doiron) pic.twitter.com/e8pz6vmBvK

Robert Duguay, spokesman for the New Brunswick Emergency Measures Organization, advised residents to avoid running generators or cooking with an open flame inside the home or garage, because the carbon monoxide this creates can become extremely dangerous. This warning was repeated numerous times over the past couple of days.

However, at least two people died due to carbon monoxide poisoning while around 31 others have been hospitalized.

About 200 members of the Canadian Armed Forces were sent to Acadian Peninsula today as part of the emergency response. They will begin their work in Caraquet in Gloucester County.

"The Canadian Army will be deployed where the greatest needs exist in the worst-hit areas of the province," premier Brian Gallant said. "They will help us and support local authorities with the door-to-door efforts, debris clearance and distribution of water and other essentials."