The Earth's magnetic field permanently protects us from the charged particles and radiation that originate in the Sun. This shield is produced by the geodynamo, the rapid motion of huge quantities of liquid iron alloy in the Earth's outer core. To maintain this magnetic field until the present day, the classical model required the Earth's core to have cooled by around 3 000 °C over the past 4.3 billion years. Now, a team of researchers from CNRS and Université Blaise Pascal suggests that, on the contrary, its temperature has fallen by only 300 °C. The action of the Moon, overlooked until now, is thought to have compensated for this difference and kept the geodynamo active.

The classical model of the formation of Earth's magnetic field raised a major paradox. For the geodynamo to work, the Earth would have had to be totally molten four billion years ago, and its core would have had to slowly cool from around 6 800 °C at that time to 3 800 °C today.

However, recent modeling of the early evolution of the internal temperature of the planet, together with geochemical studies of the composition of the oldest carbonatites and basalts, do not support such cooling. With such high temperatures being ruled out, the researchers propose another source of energy in their study.

The Earth has a slightly flattened shape and rotates about an inclined axis that wobbles around the poles. Its mantle deforms elastically due to tidal effects caused by the Moon. The researchers show that this effect could continuously stimulate the motion of the liquid iron alloy making up the outer core, and in return generate Earth's magnetic field.

The Earth continuously receives 3 700 billion watts of power through the transfer of the gravitational and rotational energy of the Earth-Moon-Sun system, and over 1 000 billion watts is thought to be available to bring about this type of motion in the outer core. This energy is enough to generate the Earth's magnetic field, which together with the Moon, resolves the major paradox in the classical theory.

The effect of gravitational forces on a planet's magnetic field has already been well documented for two of Jupiter's moons, Io and Europa, and for a number of exoplanets. 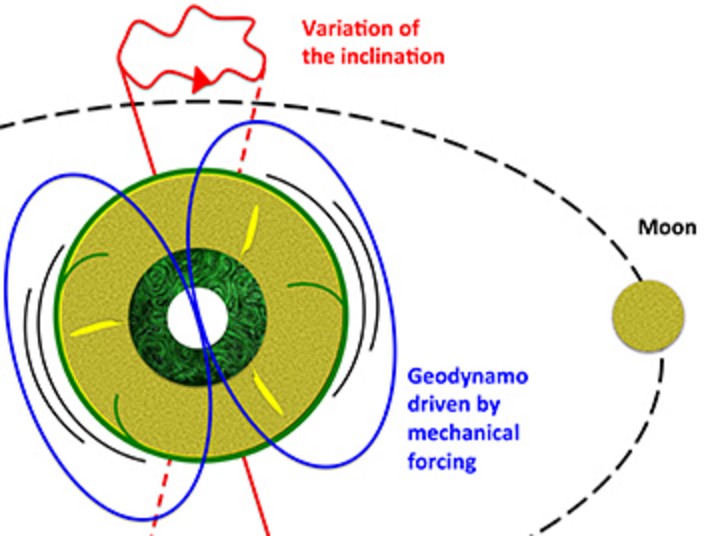 The gravitational effects associated with the presence of the Moon and Sun cause cyclical deformation of the Earth's mantle and wobbles in its rotation axis. This mechanical forcing applied to the whole planet causes strong currents in the outer core, which is made up of a liquid iron alloy of very low viscosity. Such currents are enough to generate the Earth's magnetic field. © Julien Monteux and Denis Andrault.

Since neither the Earth's rotation around its axis, nor the direction of its axis, nor the Moon's orbit are perfectly regular, their combined effect on motion in the core is unstable and can cause fluctuations in the geodynamo. This process could account for certain heat pulses in the outer core and at its boundary with the Earth's mantle.
Over the course of time, this may have led to peaks in deep mantle melting and possibly to major volcanic events at the Earth's surface. This new model shows that the Moon's effect on the Earth goes well beyond merely causing tides.

The Earth is a thermal engine generating the fundamental processes of geomagnetic field, plate tectonics and volcanism. Large amounts of heat are permanently lost at the surface yielding the classic view of the deep Earth continuously cooling down. Contrary to this conventional depiction, we propose that the temperature profile in the deep Earth has remained almost constant for the last ∼4.3 billion years. The core–mantle boundary (CMB) has reached a temperature of ∼4400 K in probably less than 1 million years after the Moon-forming impact, regardless the initial core temperature. This temperature corresponds to an abrupt increase in mantle viscosity atop the CMB, when ∼60% of partial crystallization was achieved, accompanied with a major decrease in heat flow at the CMB. Then, the deep Earth underwent a very slow cooling until it reached ∼4100 K today. This temperature at, or just below, the mantle solidus is suggested by seismological evidence of ultra-low velocity zones in the D”-layer. Such a steady thermal state of the CMB temperature excludes thermal buoyancy from being the predominant mechanism to power the geodynamo over geological time.

An alternative mechanism to sustain the geodynamo is mechanical forcing by tidal distortion and planetary precession. Motions in the outer core are generated by the conversion of gravitational and rotational energies of the Earth–Moon–Sun system. Mechanical forcing remains efficient to drive the geodynamo even for a sub-adiabatic temperature gradient in the outer core. Our thermal model of the deep Earth is compatible with an average CMB heat flow of 3.0 to 4.7 TW. Furthermore, the regime of core instabilities and/or secular changes in the astronomical forces could have supplied the lowermost mantle with a heat source of variable intensity through geological time. Episodic release of large amounts of heat could have remelted the lowermost mantle, thereby inducing the dramatic volcanic events that occurred during the Earth's history. In this scenario, because the Moon is a necessary ingredient to sustain the magnetic field, the habitability on Earth appears to require the existence of a large satellite.