According to a government statement published this week in a state-run newspaper, the entire Venezuela will be given a week off to cope with yet another crippling energy crisis. The measure is not new; the same happened in 2010 when the first electricity crisis hit.

The country, whose 65% of electricity comes from hydropower, is struggling with reduced output from its hydropower dams since 2009. The problem is even more evident today when the lack of sufficient rainfall and severe state of drought the country is experiencing a prolonged period has led to critically low water levels at its crucial Guri Dam.

However, it seems that nature is not the only factor here. While the government blames global warming, El Niño and 'sabotage' by political foes, critics say the ruling party has failed to add enough electric capacity over the past years to satisfy increasing power demand.

To understand how Venezuela, a country with the world's biggest oil reserves, can keep suffering from energy shortages, we have to look closer at the country's grid, Vox writes. 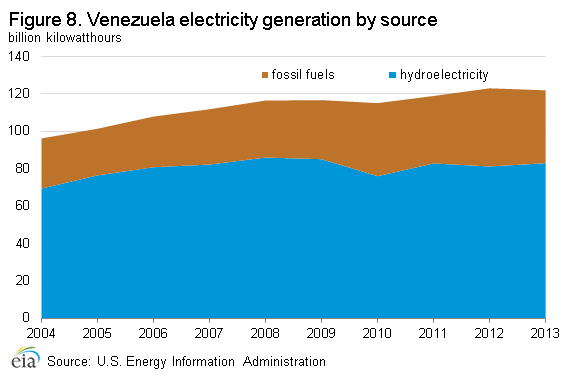 The vast majority of the country's electricity comes not from fossil fuel generators but from hydroelectric dams – particularly the massive 10.2-gigawatt Guri Dam in the eastern part of the country, which is now at its critical levels.

"Most of the time, hydropower is a clean, reliable source of electricity but the trouble occurs when there's a drought and water levels in the reservoir fall too low to spin the dam's turbines. Venezuela, crucially, doesn't have a good backup plan if its dams fail. And that's where the years of mismanagement come in," Vox's Brad Plummer explains.

“We’re hoping, God willing, rains will come,” President Nicolas Maduro said in a national address last week. “Look, the saving is more than 40% when these measures are taken. We’re reaching a difficult place that we’re trying to manage.”