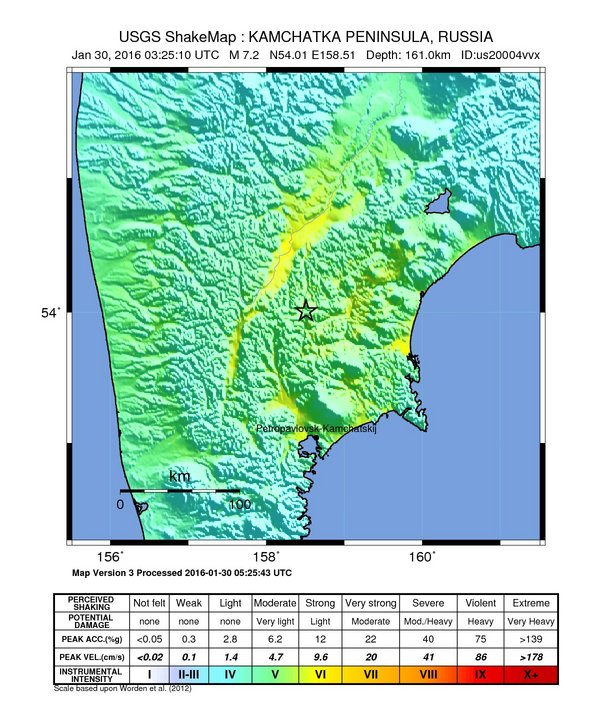 USGS issued a green alert level for shaking-related fatalities, there is a low likelihood of casualties, and a yellow alert level for economic losses. Some damage is possible, and the impact should be relatively localized. Estimated economic losses are less than 1% of GDP of the Russian Federation. Past events with this alert level have required a local or regional level response. 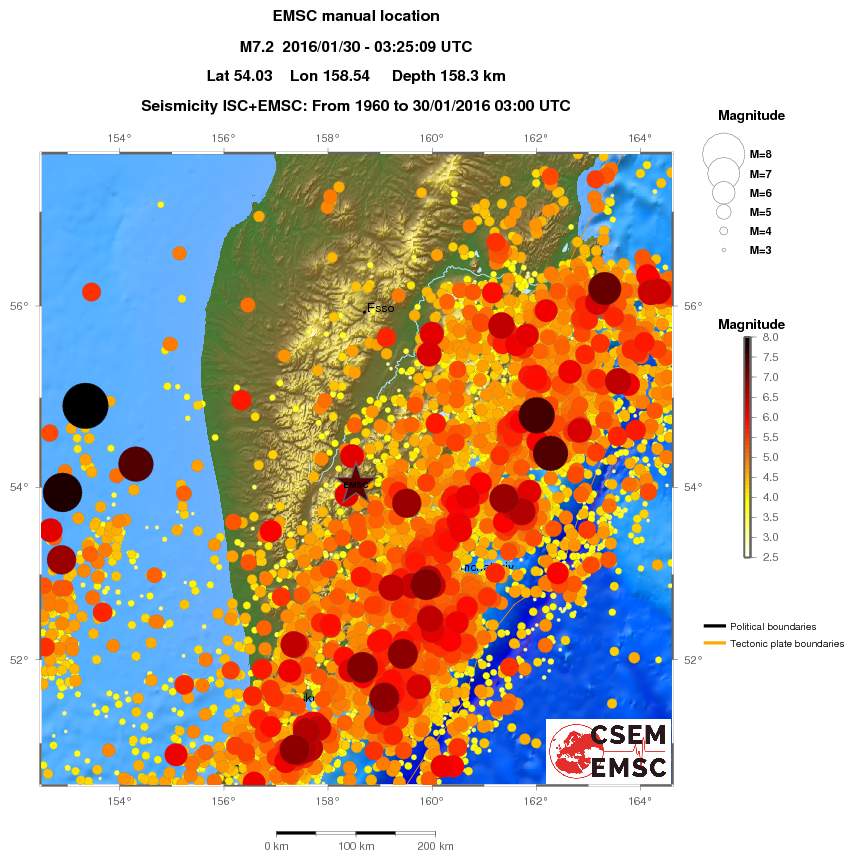 According to the USGS, the quake occurred as the result of oblique-normal faulting at a depth of 180 km (111 miles). At the location of this earthquake, the Pacific plate is moving towards the west-northwest with respect to the North America and Eurasia plates at a rate of approximately 77 mm/yr. Note that some authors divide this region into several microplates that together define the relative motions between the larger Pacific, North America and Eurasia plates; these include the Okhotsk and Amur microplates that are respectively part of North America and Eurasia. The depth and faulting mechanism of the January 30th earthquake indicate that it ruptured a fault within the subducting Pacific lithosphere.

Earthquakes like this event, with focal depths between 70 and 300 km (45 – 190 miles), are commonly termed "intermediate-depth" earthquakes. Intermediate-depth earthquakes represent deformation within subducted slabs rather than at the shallow plate interface between subducting and overriding tectonic plates. They typically cause less damage on the ground surface above their foci than is the case with similar magnitude shallow-focus earthquakes, but large intermediate-depth earthquakes may be felt at great distance from their epicenters. "Deep-focus" earthquakes, those with focal depths greater than 300 km, also occur in the subducted Pacific plate beneath Kamchatka, and this slab hosted the largest ever-recorded deep earthquake, a M8.3 event in May 2013. The deepest reliably located earthquake in this region occurred at a depth of almost 650 km (403 miles).

The Kuril-Kamchatka arc has frequent moderate-to-large earthquakes, and has hosted over thirty M6.5+ events within 250 km (155 miles) of the January 30th earthquake over the past century. Most of these occurred on the shallow megathrust plate boundary; just three were at intermediate depths. The largest of these three was a M7.3 earthquake in November 1971, 140 km (87 miles) south-southeast of the January 30, 2016 event, at a depth of 125 km (77 miles). The shallow plate boundary in this region hosted a M9.0 earthquake in November 1952, resulting in a large tsunami that caused damage and fatalities along the coastlines of Kamchatka and the Kuril Islands, and which also caused significant damage in Hawai’i.