Two Caltech researchers have announced today, January 20, 2016, they have found evidence of a giant planet tracing a bizarre, highly elongated orbit in the outer solar system. The object, which the researchers have nicknamed Planet Nine, has a mass about 10 times that of Earth and orbits about 20 times farther from the Sun on average than does Neptune. It would take this new planet between 10 000 and 20 000 years to make just one full orbit around the Sun.

Interestingly, if Pluto were still a planet, not a dwarf planet as decided by the International Astronomical Union in 2006, this new planet would not be called Planet Nine, but Planet Ten. Some would even call it Planet X. For real.

Researchers are hoping worldwide efforts to find this new planet will start as they announce the evidence.

The planet's existence was discovered by Konstantin Batygin and Mike Brown through mathematical modeling and computer simulations, but they have not yet observed the object directly. Batygin and Brown describe their work in the current issue of the Astronomical Journal and show how Planet Nine helps explain a number of mysterious features of the field of icy objects and debris beyond Neptune known as the Kuiper Belt.

"This would be a real ninth planet," says Brown, the Richard and Barbara Rosenberg Professor of Planetary Astronomy.

"There have only been two true planets discovered since ancient times, and this would be a third. It's a pretty substantial chunk of our solar system that's still out there to be found, which is pretty exciting," Brown said.

Brown notes that the putative ninth planet – at 5 000 times the mass of Pluto – is sufficiently large that there should be no debate about whether it is a true planet. Unlike the class of smaller objects now known as dwarf planets, Planet Nine gravitationally dominates its neighborhood of the solar system. In fact, it dominates a region larger than any of the other known planets  – a fact that Brown says makes it "the most planet-y of the planets in the whole solar system." 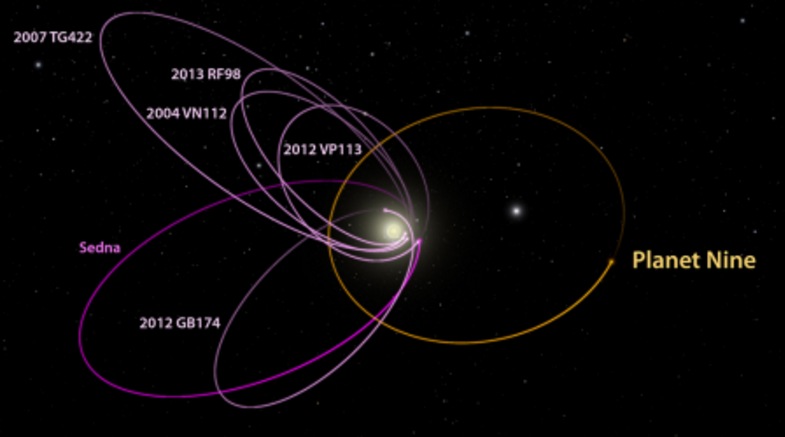 "Although we were initially quite skeptical that this planet could exist, as we continued to investigate its orbit and what it would mean for the outer solar system, we become increasingly convinced that it is out there," says Batygin, an assistant professor of planetary science. "For the first time in over 150 years, there is solid evidence that the solar system's planetary census is incomplete."

Planet Nine's existence helps explain more than just the alignment of the distant Kuiper Belt objects. It also provides an explanation for the mysterious orbits that two of them trace. The first of those objects, dubbed Sedna, was discovered by Brown in 2003. Unlike standard-variety Kuiper Belt objects, which get gravitationally "kicked out" by Neptune and then return back to it, Sedna never gets very close to Neptune. A second object like Sedna, known as 2012 VP113, was announced by Trujillo and Shepherd in 2014. Batygin and Brown found that the presence of Planet Nine in its proposed orbit naturally produces Sedna-like objects by taking a standard Kuiper Belt object and slowly pulling it away into an orbit less connected to Neptune.

"When the simulation aligned the distant Kuiper Belt objects and created objects like Sedna, we thought this is kind of awesome – you kill two birds with one stone," says Batygin. "But with the existence of the planet also explaining these perpendicular orbits, not only do you kill two birds, you also take down a bird that you didn't realize was sitting in a nearby tree."

But the real kicker for the researchers was the fact that their simulations also predicted that there would be objects in the Kuiper Belt on orbits inclined perpendicularly to the plane of the planets. Batygin kept finding evidence for these in his simulations and took them to Brown.

"Suddenly I realized there are objects like that," recalls Brown. In the last three years, observers have identified four objects tracing orbits roughly along one perpendicular line from Neptune and one object along another. "We plotted up the positions of those objects and their orbits, and they matched the simulations exactly," says Brown. "When we found that, my jaw sort of hit the floor." 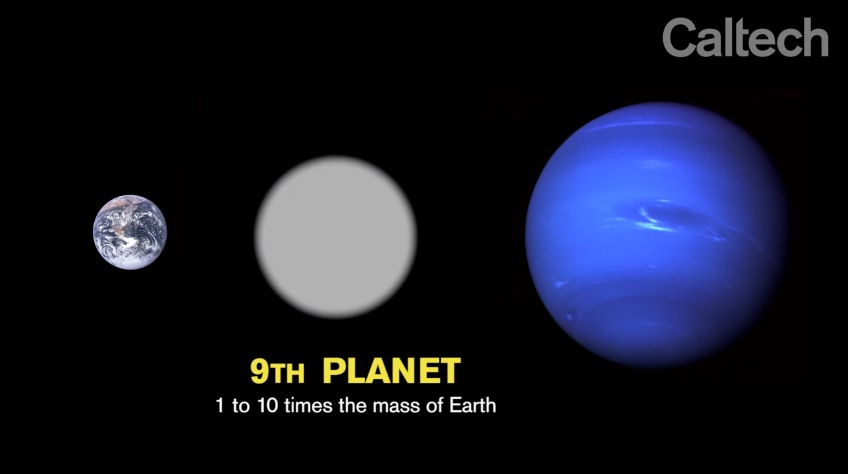 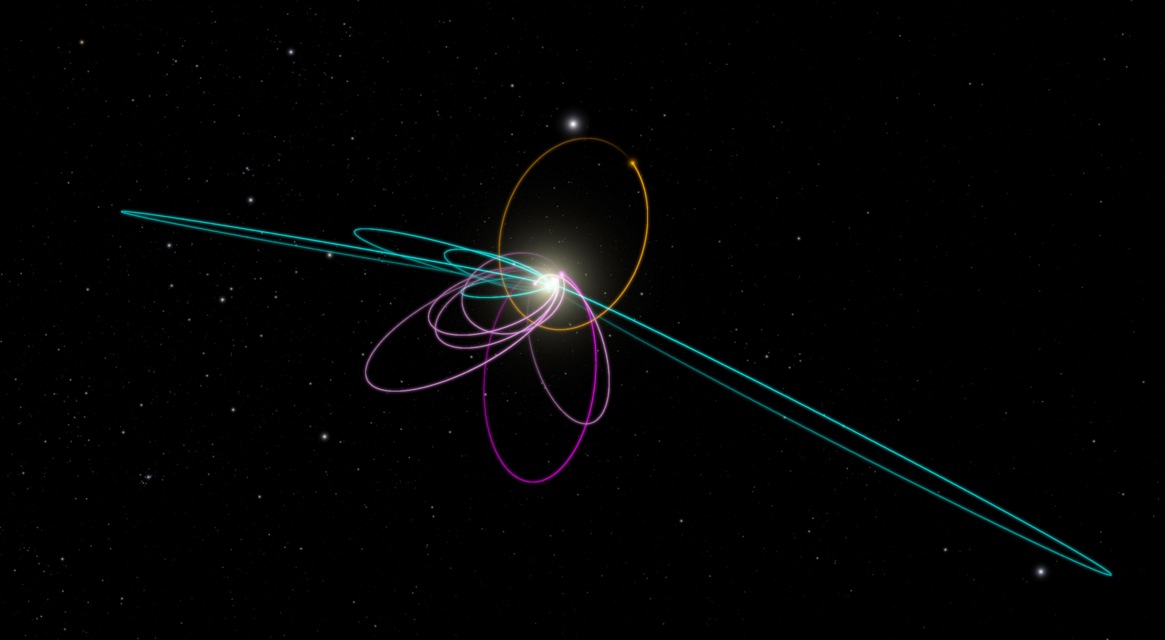 A predicted consequence of Planet Nine is that a second set of confined objects should also exist. These objects are forced into positions at right angles to Planet Nine and into orbits that are perpendicular to the plane of the solar system. Five known objects (blue) fit this prediction precisely.
Credit: Caltech/R. Hurt (IPAC) [Diagram was created using WorldWide Telescope.]

Where did Planet Nine come from and how did it end up in the outer Solar System?

Scientists have long believed that the early solar system began with four planetary cores that went on to grab all of the gas around them, forming the four gas planets – Jupiter, Saturn, Uranus, and Neptune. Over time, collisions and ejections shaped them and moved them out to their present locations. "But there is no reason that there could not have been five cores, rather than four," says Brown. Planet Nine could represent that fifth core, and if it got too close to Jupiter or Saturn, it could have been ejected into its distant, eccentric orbit.

Batygin and Brown continue to refine their simulations and learn more about the planet's orbit and its influence on the distant solar system. Meanwhile, Brown and other colleagues have begun searching the skies for Planet Nine. Only the planet's rough orbit is known, not the precise location of the planet on that elliptical path. If the planet happens to be close to its perihelion, Brown says, astronomers should be able to spot it in images captured by previous surveys. If it is in the most distant part of its orbit, the world's largest telescopes—such as the twin 10-meter telescopes at the W. M. Keck Observatory and the Subaru Telescope, all on Mauna Kea in Hawaii—will be needed to see it. If, however, Planet Nine is now located anywhere in between, many telescopes have a shot at finding it.

"I would love to find it," says Brown. "But I'd also be perfectly happy if someone else found it. That is why we're publishing this paper. We hope that other people are going to get inspired and start searching."

In terms of understanding more about the solar system's context in the rest of the universe, Batygin says that in a couple of ways, this ninth planet that seems like such an oddball to us would actually make our solar system more similar to the other planetary systems that astronomers are finding around other stars. First, most of the planets around other sunlike stars have no single orbital range—that is, some orbit extremely close to their host stars while others follow exceptionally distant orbits. Second, the most common planets around other stars range between 1 and 10 Earth-masses.

Brown, well known for the significant role he played in the demotion of Pluto from a planet to a dwarf planet adds, "All those people who are mad that Pluto is no longer a planet can be thrilled to know that there is a real planet out there still to be found," he says. "Now we can go and find this planet and make the solar system have nine planets once again."

The paper is titled "Evidence for a Distant Giant Planet in the Solar System."

NASA’s Director of Planetary Science, Jim Green, discusses the January 20 Astronomical Journal science paper that points to the possibility of a new “Planet 9” in our solar system beyond Pluto, examining the scientific process and inviting you to have a front row seat to our exploration of the solar system.