A team of scientists at NASA's Goddard Space Flight Center plan to send a ball sized spherical titanium occulter to study the Sun's corona. This mission is expected to help scientists understand Coronal Mass Ejections (CMEs) much more clearly. The spherical titanium occulter made of carbon nanotubes is expected to be much more effective in studying the Sun's corona as compared to traditional flat-plate occulters that are in use currently.

The team is led by NASA scientist Phillip Chamberlin. They are planning to send a CubeSat mission which will carry an imaging spectrograph to study the Sun's corona in general and CMEs in particular. The ball-shaped titanium occulter will fly in formation with the CubeSat and has been named the Spherical Occulter Coronagraph CubeSat (SpOC). The SpOC would block the Sun's light by creating an artificial solar eclipse. This would reveal the Sun's corona to the image spectrograph and also allow it to study potential CMEs clearly.

CMEs are highly charged particles that are emitted by the Sun's upper atmosphere. These CMEs travel throughout the Solar System at extremely high speeds and cause geomagnetic storms and aurora's in Earth's polar regions. CMEs can also potentially damage satellites and disrupt power lines on Earth. This makes it imperative to get a clear understanding of how CMEs are launched from the Sun's atmosphere and how they function. 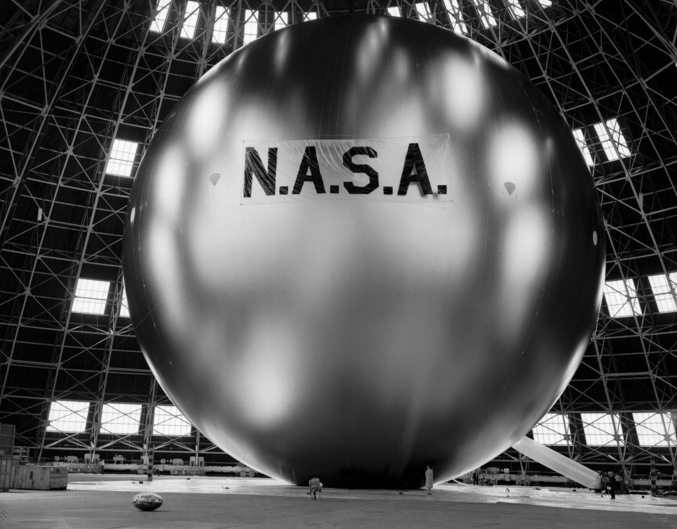 The inspiration behind a potential next-generation occulter disk is Echo 1, a communications satellite launched in 1960. Image credits: NASA

The proposed CubeSat mission is expected to enhance the scientists' understanding of coronal maturity within the Sun's surface along with the reason behind coronal mass ejections (CMEs). “Currently we can’t predict them. We don’t know the warning signs. We’re like weather forecasters 50 years ago,” Chamberlin said, adding the mission also could shed light into why the solar corona is orders-of-magnitude hotter than the Sun’s surface, or photosphere.

NASA plans to insert the SpOC CubeSat in an orbit beyond the Moon where the instrument laden spacecraft would deploy the spherical occulter and then adjust its own orbit, so as to continuously fly at a distance of 2.1 meters (7 feet) behind the occulter.

Currently, two solar centric spacecraft,  Solar and Heliospheric Observatory, or SOHO, that NASA launched in 1995 and the Solar Terrestrial Relations Observatory, or STEREO, deployed 11 years later carry their own coronagraphs in the form of  flat-plate occulters. A visual representation of the COR1 coronagraph aboard the  STEREO spacecraft is shown below. However, since both these missions are getting old and there are no new mainstream missions planned by NASA to study solar coronas, the SpOC can be considered to be a timely mission according to Chamberlin. He also adds that the shape and position of the occulters used in the earlier missions vis-à-vis SpOC will make a huge difference in the study of CMEs. 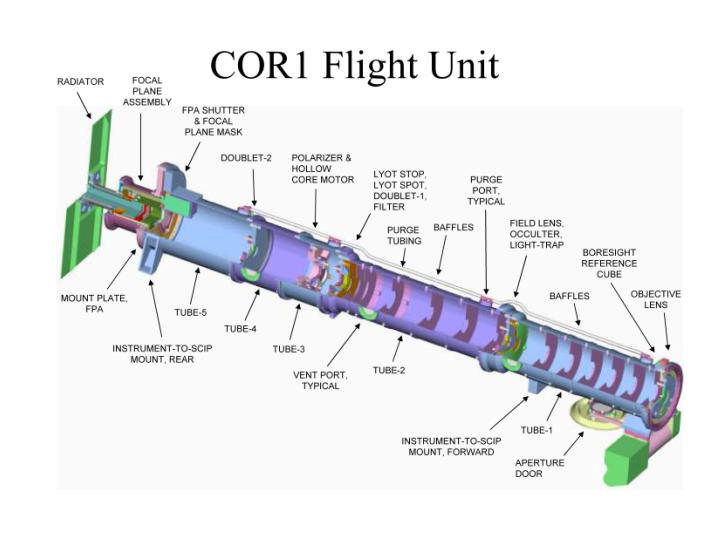 COR1 is an internally-occulted coronagraph of length ~1.2m (~3.9 feet) and is part of the Solar Terrestrial Relations Observatory (STEREO) spacecraft. Image credit: NASA

“Coronagraphs are notoriously noisy,” according to Chamberlin. Diffractive light – the light that passes around the edge of an object — interferes with the light that the instrument needs to gather. Chamberlin added that light contamination can be reduced by placing the occulter disk as far away from the spectrograph/telescope as possible. For e.g., in SOHO, the occulter is positioned 0.8 meters (2.6 feet) from the coronagraph, while in STEREO, it is placed even farther away at 1.2 meters (4 feet).

Chamberlin also feels that current research will soon show that spherical occulters are more effective than flat plates at blocking light. Chamberlin gives the example of the Moon as proof of concept. The Moon acts as a natural coronagraph during any solar eclipse and reveals a faintish helo of light coming directly from the Sun's corona. “The diffraction isn’t concentrated and therefore you get less noise,” Chamberlin said.

The SpOC has twin advantages over traditional flat-plate occulters used so far, according to Chamberlin. The first is the spherical shape which offers diffraction-suppression advantages which in turn would significantly help in eliminating noise. The second advantage, lies in the proposed carbon nanotube structure of the SpOC. The super-black carbon nanotube coating which will be applied to the spherical titanium occulter will be very effective at absorbing all forms of stray light according to Chamberlin. This will help further reduce scattered sunlight that reflects off Earth and then into the spectrograph on the SpOC CubeSat.

This movie shows a CME on the Sun between 02.00 UTC and 07.00 UTC on July 23, 2012 as captured by NASA's Solar TErrestrial RElations Observatory-Ahead (STEREO-A). Because the CME headed in STEREO-A's direction, it appears like a giant halo around the Sun. Video credit: NASA

Based on the success of this mission, Chamberlin plans to send another much larger CubeSat mission which would feature an inflatable occulter with a diameter of 29.9 meters (98 feet) which would resemble a massive beach ball. Chemberlin cites the ECHO-1 as his inspiration for this concept. NASA’s Langley Research Center designed Echo 1, a 30 meters (100 feet) in diameter Mylar-covered (a protective plastic coating or insulation) sphere that operated as a passive communications reflector for transcontinental and intercontinental telephone, radio, and television signals after its launch from the NASA’s Wallops Flight Facility in 1960. It re-entered Earth’s atmosphere in 1968.