The remains of a major new prehistoric stone monument have been discovered less than 3 km (1.8 miles) from Stonehenge and announced on the first day of the British Science Festival on September 7, 2015. Using cutting edge, multi-sensor technologies the Stonehenge Hidden Landscapes Project has revealed evidence for a large stone monument hidden beneath the bank of the later Durrington Walls ‘super-henge’.

Durrington Walls is one of the largest known henge monuments measuring 500 m (0.3 miles) in diameter and thought to have been built around 4 500 years ago. Measuring more than 1.5 km (0.9 miles) in circumference, it is surrounded by a ditch up to 17.6 m (57 feet) wide and an outer bank about 40 m (131 feet) wide and surviving up to a height of 1 m (3.3 feet). The henge surrounds several smaller enclosures and timber circles and is associated with a recently excavated later Neolithic settlement. 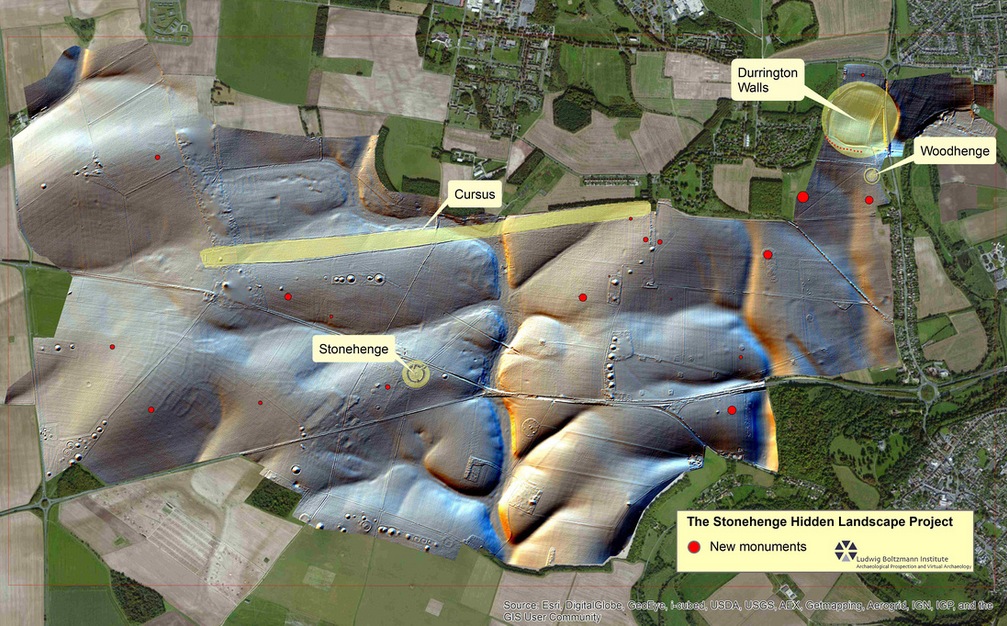 The Stonehenge Hidden Landscapes Project team, using non-invasive geophysical prospection and remote sensing technologies, has now discovered evidence for a row of up to 100 standing stones, some of which may have originally measured up to 4.5 m (14.7 feet) in height.

Many of these stones have survived because they were pushed over and the massive bank of the later henge raised over the recumbent stones or the pits in which they stood. Hidden for millennia, only the use of cutting edge technologies has allowed archaeologists to reveal their presence without the need for excavation.

At Durrington, more than 4 500 years ago, a natural depression near the river Avon appears to have been accentuated by a chalk cut scarp and then delineated on the southern side by the row of massive stones. Essentially forming a C-shaped ‘arena’, the monument may have surrounded traces of springs and a dry valley leading from there into the Avon. Although none of the stones have yet been excavated, a unique sarsen standing stone, “The Cuckoo Stone”, remains in the adjacent field and this suggests that other stones may have come from local sources.

“The extraordinary scale, detail and novelty of the evidence produced by the Stonehenge Hidden Landscapes Project, which the new discoveries at Durrington Walls exemplify, is changing fundamentally our understanding of Stonehenge and the world around it. Everything written previously about the Stonehenge landscape and the ancient monuments within it will need to be re-written.” Paul Garwood, Senior Lecturer in Archaeology at the University of Birmingham, and the principal prehistorian on the project. 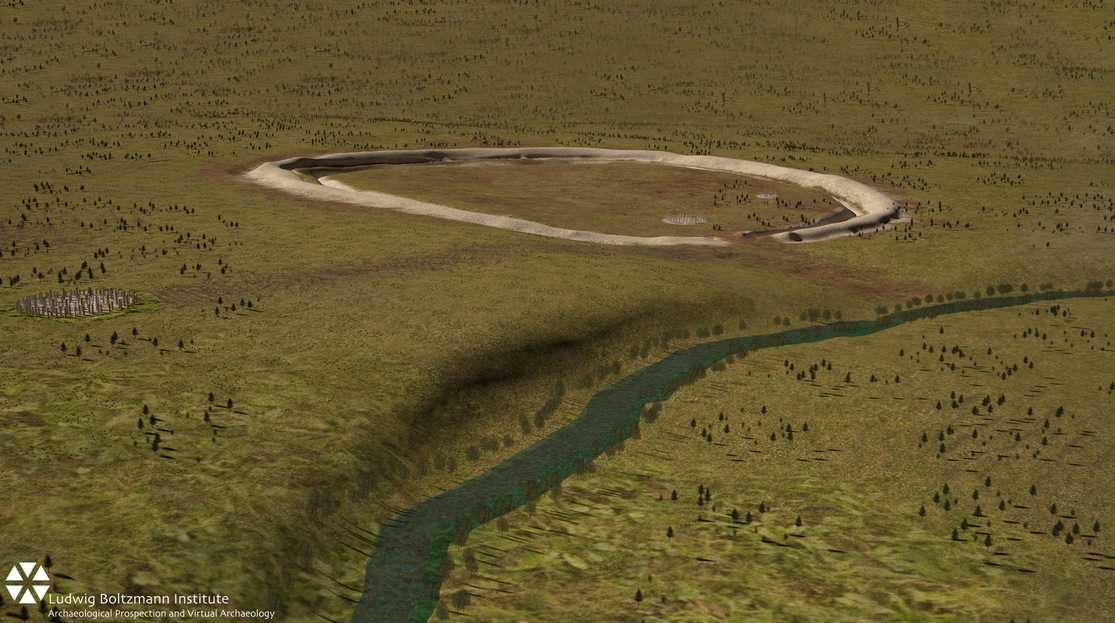 Previous, intensive study of the area around Stonehenge had led archaeologists to believe that only Stonehenge and a smaller henge at the end of the Stonehenge Avenue possessed significant stone structures. The latest surveys now provide evidence that Stonehenge’s largest neighbour, Durrington Walls, had an earlier phase which included a large row of standing stones probably of local origin and that the context of the preservation of these stones is exceptional and the configuration unique to British archaeology.

This new discovery has significant implications for our understanding of Stonehenge and its landscape setting. The earthwork enclosure at Durrington Walls was built about a century after the Stonehenge sarsen circle (in the 27th century BC), but the new stone row could well be contemporary with or earlier than this. Not only does this new evidence demonstrate an early phase of monumental architecture at one of the greatest ceremonial sites in prehistoric Europe, it also raises significant questions about the landscape the builders of Stonehenge inhabited and how they changed this with new monument-building during the 3rd millennium BC.

The Stonehenge Hidden Landscapes Project is an international collaboration between the University of Birmingham and the Ludwig Boltzmann Institute for Archaeological Prospection and Virtual Archaeology (LBI ArchPro) and led by Professor Wolfgang Neubauer and Professor Vincent Gaffney (University of Bradford).  As part of the project, experts from many different fields and institutions have been examining the area around Stonehenge revealing new and previously known sites in unprecedented detail and transforming our knowledge of this iconic landscape.

“Our high resolution ground penetrating radar data has revealed an amazing row of up to 90 standing stones a number of which have survived after being pushed over and a massive bank placed over the stones. In the east up to 30 stones, measuring up to size of 4.5 m x 1.5 x 1 m (14.7 x 4.9 x 3.3 feet), have survived below the bank whereas elsewhere the stones are fragmentary or represented by massive foundation pits,” says Professor Neubauer, director of the LBI ArchPro. 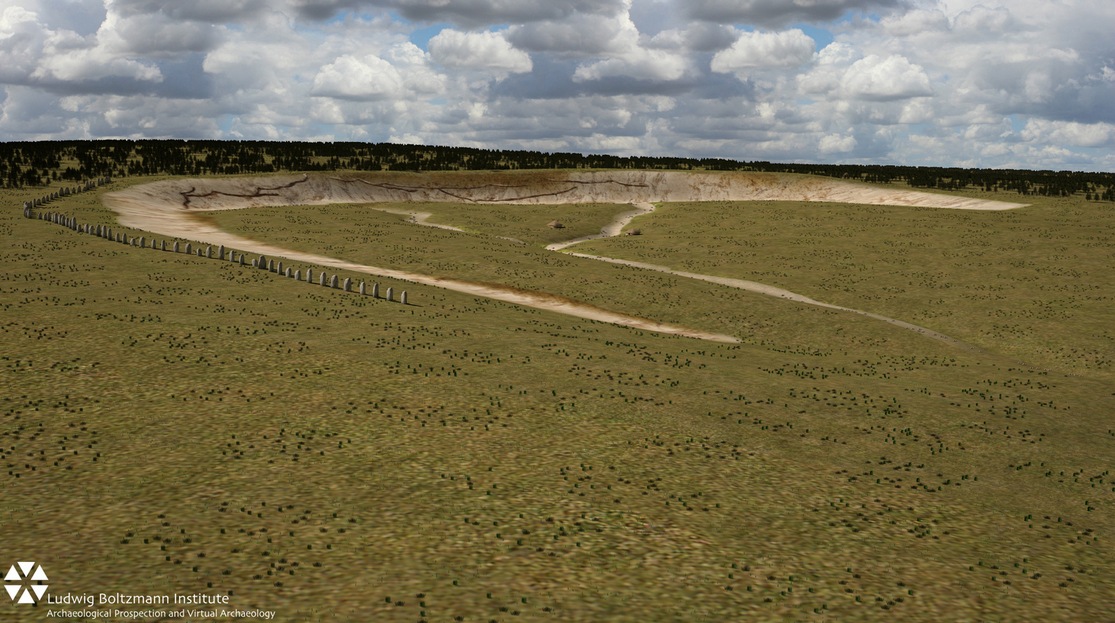 “This discovery of a major new stone monument, which has been preserved to a remarkable extent, has significant implications for our understanding of Stonehenge and its landscape setting. Not only does this new evidence demonstrate a completely unexpected phase of monumental architecture at one of the greatest ceremonial sites in prehistoric Europe, the new stone row could well be contemporary with the famous Stonehenge sarsen circle or even earlier,” explains Professor Gaffney.