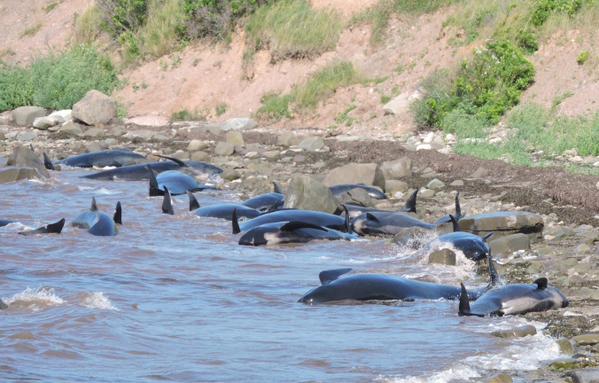 16 pilot whales got stranded on a shore in Cape Breton, Canada by a low tide, on Tuesday, August 4. Rescuers managed to save 10 of them, by pushing them into deeper water, while the other 6 died.

20 people put their efforts into saving whales of different sizes, including about a meter long baby and up to 3.5 meters long adults: "There were between one and four people surrounding each whale. For as many whales as we could, people were just trying to keep them upright and trying to nudge them out to deeper water", local resident Maggie MacIntyre said.

In case they get stranded the pilot whales need to be kept upright until the tides get higher again. The rescuers were doing their best and as the tide came in again, they'd try to push the animals back into deeper water: "We were just trying to do what we could until the tide got high — just keeping them upright. And as the tide came in there started to be a bit of a lift, we'd try to push them out into the deeper water."

Andrew Reid with the Marine Animal Response Society explained that pilot whales are social animals and they can easily get stranded if one of them is injured, sick or beached or during their feeding time. Although the rescue operation saved most of the animals, according to Mr. Reid, there is still a possibility the whales could get stranded again, as they have a tendency to do so.

Biological samples for the future research will be collected from the whales carcasses: "If there are no re-strandings, we'll collect specimens and measurements from the animals that weren't able to be rescued," Reid said.

The removal of the dead bodies of stranded animals can be a bit complicated: "Usually, disposal in Nova Scotia, is left to whoever's land it is."