Red glow visible through the clouds on the night of January 31 confirmed an eruption is taking place. 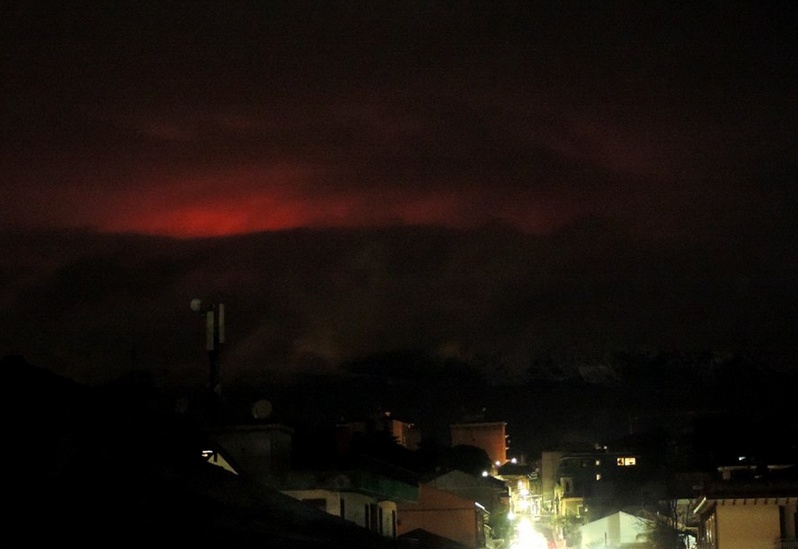 On Sunday, February 1, an impressive lava flow was observed taking path to the SW, passing the 2002 cones on their western side and descending already to approximately 2000 meters or less altitude, a few kilometers west of the provincial road to La Sapienza, VolcanoDiscovery said.

Strombolian activity was observed from the SE crater.

Activity on December 28 started rather abruptly (at about 16:50 UTC) and rapidly intensified. After 18:30 UTC, the amplitude of volcanic tremor began to decline, and the episode was substantially completed at 20:00 UTC. 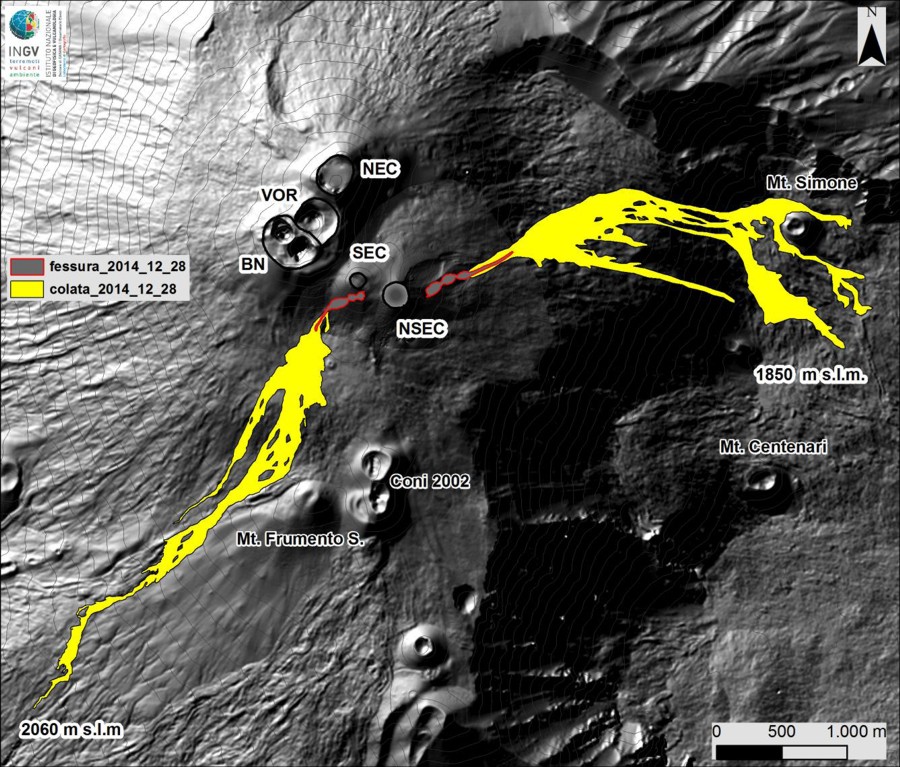 Map of the lava fields formed on the south-western slope of the volcano and along the western wall of the Valle del Bove during paroxysmal event of December 28, 2014. Map by the laboratory of cartography INGV-OE.

Cameras viewing Etna recorded small ash emissions from New Southeast Crater (NSEC) and persistent glow from the saddle between the old and new SEC cones at dusk on December 29.

During the nights of January 1 and 2, cameras recorded intermittent flashes from Voragine Crater (one of four summit craters), indicating Strombolian activity there for the first time in nearly two years.

Significant ash emissions were observed on January 2 and Aviation Color Code was raised to Red. At 07:13 UTC, Toulouse VAAC reported ash emissions that started at 06:25 UTC are below 4.5 km.

On the evening of January 3 explosions ejected incandescent material 150 m above the crater rim.

The frequency of Strombolian explosions at  Voragine Crater decreased during the night of January 6 – 7, INGV reported. However, some of the explosions ejected incandescent pyroclastic material outside of the crater and onto the W and SW flanks.

On January 7 many of the small explosions generated brown ash plumes that rose a few hundred meters above Etna's summit and quickly dissipated.

Strombolian activity increased on January 8, possibly from two vents within the crater. Pyroclastic material continued to be ejected out of the crater.

Weak Strombolian activity was recorded at Voragine and Northeast craters ​on the evening of January 14. The next day occasionally pulsating ash emissions rose from Northeast Crater and drifted SE. 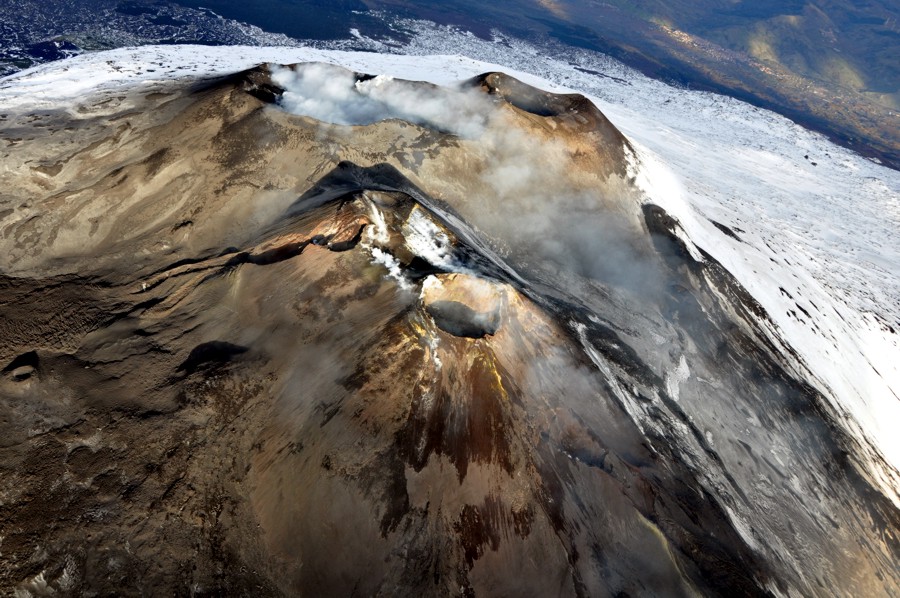 Summit craters of Etna seen from helicopter on the morning of January 14, 2015, looking northwest. In the foreground is the cone of the New Southeast Crater (NSEC), its summit vent being much enlarged after the 28 December 2014 paroxysm, and the old Southeast Crater, with an extensive fumarolic area on the "saddle" between the two cones. Note the two conspicuous eruptive fissures, both on the northeastern flank of the NSEC (in the lower right portion of the image), and on the south flank of the old Southeast Crater, which opened on December 28, 2014. In the background, the Bocca Nuova (at left), the Voragine (center, emitting a dense white vapor plume), and the Northeast Crater (at right). The town visible in the distance at uppe right is Randazzo, on the north-northwestern flank of Etna. Photo by Marco Neri, INGV-Osservatorio Etneo.

(The full report on observations carried out by INGV-Osservatorio Etneo during an overflight by helicopter AW139 Coast Guard on January 14, 2015 can be accessed here.)

Mount Etna, towering above Catania, Sicily's second largest city, has one of the world's longest documented records of historical volcanism, dating back to 1500 BCE. Historical lava flows of basaltic composition cover much of the surface of this massive volcano, whose edifice is the highest and most voluminous in Italy. The Mongibello stratovolcano, truncated by several small calderas, was constructed during the late Pleistocene and Holocene over an older shield volcano. The most prominent morphological feature of Etna is the Valle del Bove, a 5 x 10 km horseshoe-shaped caldera open to the east. Two styles of eruptive activity typically occur at Etna.

Persistent explosive eruptions, sometimes with minor lava emissions, take place from one or more of the three prominent summit craters, the Central Crater, NE Crater, and SE Crater (the latter formed in 1978). Flank vents, typically with higher effusion rates, are less frequently active and originate from fissures that open progressively downward from near the summit (usually accompanied by strombolian eruptions at the upper end). Cinder cones are commonly constructed over the vents of lower-flank lava flows. Lava flows extend to the foot of the volcano on all sides and have reached the sea over a broad area on the SE flank. (GVP)