Significant ash emissions are being observed at Italy's Mount Etna today. At 07:13 UTC, Toulouse VAAC reported ash emissions that started at 06:25 UTC are below 4.5 km.

Aviation Color Code has been raised to Red. 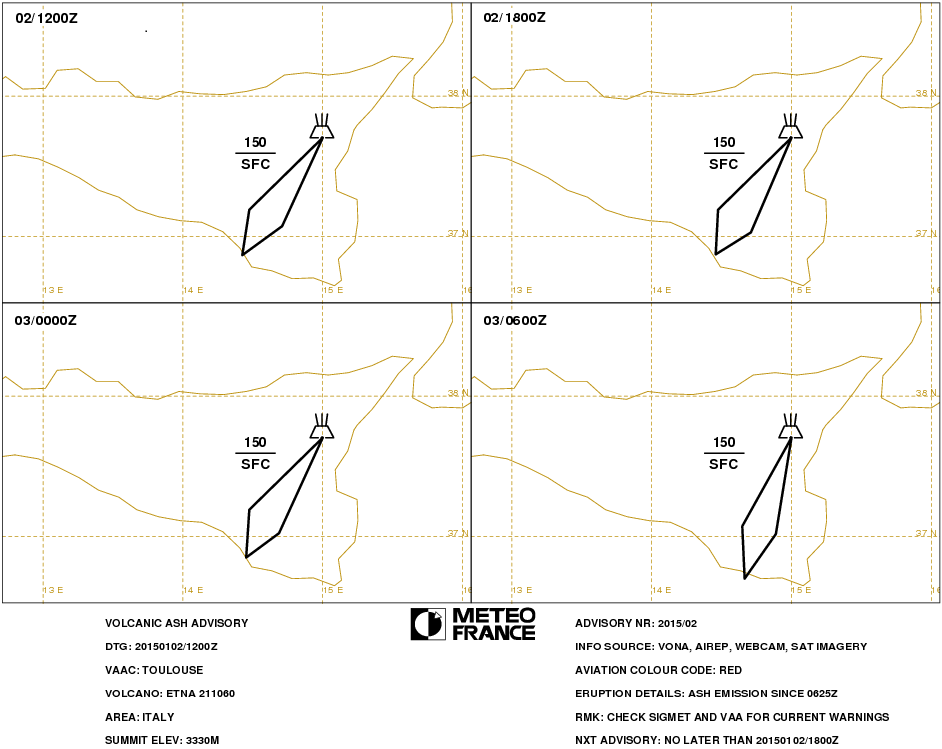 The following timelapse video by Turi Caggegi shows today's ash emissions pushed by the strong winds to the southwest:

Today's event comes just 5 days after Etna experienced brief but intense eruption on December 28, 2014, the strongest since December 2, 2013. The eruption was characterized by lava fountains and lava flows, but very bad weather prevented clear identification of the craters involved.

On December 31, Osservatorio Etneo reported that observations made during the last few days have allowed to say the paroxysmal episode of December 28th occurred on a number of eruptive vents aligned along a fracture oriented northeast-southwest, which has cut the cone of the New Southeast Crater (NSEC) and the southern side of the old Southeast Crater.

Lava poured from the two ends of this fracture to the southwest, towards the Milia-Galvarina, and northeast to the northern part of the Valle del Bove near Monte Simone, and reached lengths of about 4.5 and 3.3 km, respectively. (Find INGV's detailed analysis of that event here)

After the eruption on 28th, volcanic tremors briefly reached background levels and started rising again on December 31, as visible on the image below:

Two styles of eruptive activity typically occur at Etna. Persistent explosive eruptions, sometimes with minor lava emissions, take place from one or more of the three prominent summit craters, the Central Crater, NE Crater, and SE Crater (the latter formed in 1978). Flank vents, typically with higher effusion rates, are less frequently active and originate from fissures that open progressively downward from near the summit (usually accompanied by strombolian eruptions at the upper end). Cinder cones are commonly constructed over the vents of lower-flank lava flows. Lava flows extend to the foot of the volcano on all sides and have reached the sea over a broad area on the SE flank.