The GPM mission will help advance our understanding of Earth's water and energy cycles, improve the forecasting of extreme events that cause natural disasters, and extend current capabilities of using satellite precipitation information to directly benefit society.

The GPM mission is the first coordinated international satellite network to provide near real-time observations of rain and snow every three hours anywhere on the globe. The GPM Core Observatory anchors this network by providing observations on all types of precipitation.

The observatory's data acts as the measuring stick by which partner observations can be combined into a unified data set. The data will be used by scientists to study climate change, freshwater resources, floods and droughts, and hurricane formation and tracking. 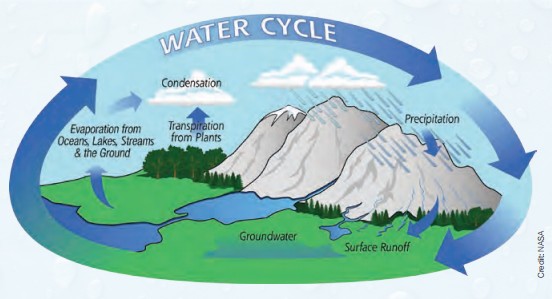 The water cycle describes how water evaporates from Earth’s surfaces, rises into the atmosphere, cools and
condenses to form clouds, and falls again to the surface as precipitation. About 75 percent of the energy (or heat) in
the global atmosphere is transferred through the evaporation of water from the surface, primarily from the oceans.
The movement of water by precipitation, infiltration, transpiration, runoff and subsurface flow redistributes water
around the globe. Image credit: NASA / GPM

GPM will take a major step in improving upon the capabilities of the Tropical Rainfall Measurement Mission (TRMM), a joint NASA-JAXA mission launched in 1997 and still in operation. While TRMM measured precipitation in the tropics, the GPM Core Observatory expands the coverage area from the Arctic Circle to the Antarctic Circle.

GPM will also be able to detect light rain and snowfall, a major source of available fresh water in some regions.

The GPM Core Observatory was assembled at Goddard and is the largest spacecraft ever built at the center. It carries two instruments to measure rain and snowfall. The GPM Microwave Imager, provided by NASA, will estimate precipitation intensities from heavy to light rain, and snowfall by carefully measuring the minute amounts of energy naturally emitted by precipitation.

The Dual-frequency Precipitation Radar (DPR), developed by JAXA with the National Institute of Information and Communication Technology, Tokyo, will use emitted radar pulses to make detailed measurements of three-dimensional rainfall structure and intensity, allowing scientists to improve estimates of how much water the precipitation holds. Mission operations and data processing will be managed from Goddard.

"It is incredibly exciting to see this spacecraft launch," said GPM Project Manager Art Azarbarzin of NASA's Goddard Space Flight Center in Greenbelt, Md. "This is the moment that the GPM Team has been working toward since 2006. The GPM Core Observatory is the product of a dedicated team at Goddard, JAXA and others worldwide. Soon, as GPM begins to collect precipitation observations, we'll see these instruments at work providing real-time information for the scientists about the intensification of storms, rainfall in remote areas and so much more."

"We still have a lot to learn about how rain and snow systems behave in the bigger Earth system," said GPM Project Scientist Gail Skofronick-Jackson of Goddard. "With the advanced instruments on the GPM Core Observatory, we will have for the first time frequent unified global observations of all types of precipitation, everything from the rain in your backyard to storms forming over the oceans to the falling snow contributing to water resources."

"We have spent more than a decade developing DPR using Japanese technology, the first radar of its kind in space," said Masahiro Kojima, JAXA GPM/DPR project manager. "I expect GPM to produce important new results for our society by improving weather forecasts and prediction of extreme events such as typhoons and flooding." 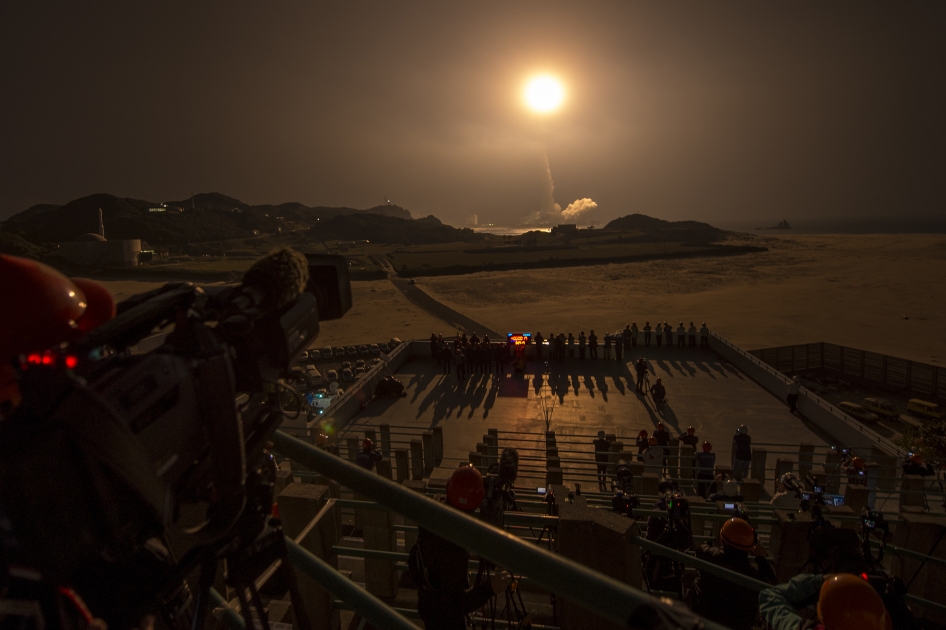 The satellite will fly 407 kilometers (253 miles) above Earth in an orbit inclined 65-degrees to the equator. This orbit allows the Core Observatory to observe precipitation from the Arctic Circle to the Antarctic Circle at different times of day so it is able to observe changing storm and weather systems that behave differently during day and night. Normal operations will begin about 60 days after launch.

Data will be downlinked through NASA's Tracking and Data Relay Satellite System to the agency's Goddard Space Flight Center's Precipitation Processing Center in Greenbelt, Md., where it will be processed and distributed over the Internet.