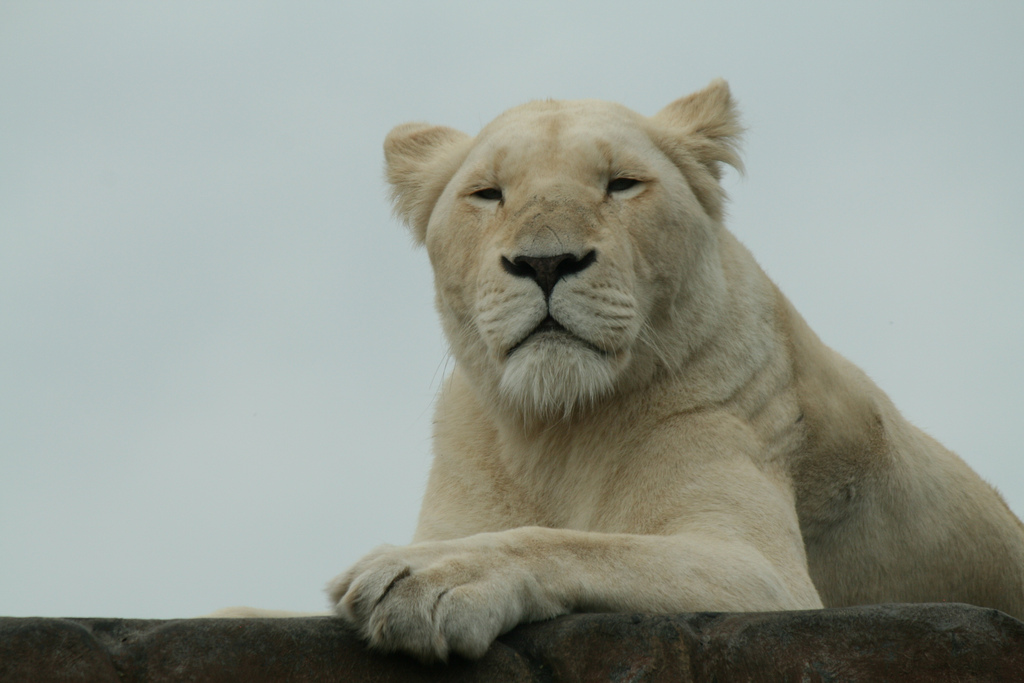 A new study published in PLOS One journal last week warns that a dramatic decline of West African lions has placed them on the verge of extinction. Study authors call for urgent intervention to save them.

The lion (Panthera leo) was the most successful large carnivore during the late Pleistocene, when the species' range extended from South Africa, across Eurasia, and into the southern United States. Today, the lion's range is restricted to Africa and one population of the Asiatic sub-species, P. l. persica, in India.

While the endangered Asiatic population is currently considered stable, lion populations in Africa are in decline and the African sub-species, P. l. leo, is considered vulnerable. Recent analyses established that the African lion has lost at least 75% of its original habitat, with fewer than 35 000 wild African lions remaining.

The main drivers of lion declines are large-scale habitat conversion, prey base depletion through unsustainable hunting, and the retaliatory killing of lions due to perceived or real human-lion conflict.

The situation is most critical in West Africa, where lions have been considered regionally endangered since 2004, and where less than 500 individuals may persist (less than 250 mature individuals).

Elevating their conservation significance, recent molecular studies established the genetic distinctiveness of West and Central African lions from other extant African populations. However, formulating effective conservation strategies has been hampered by a lack of data on the species' current distribution, status, and potential management deficiencies of protected areas (PAs) harboring lions.

Co-author of the study, Dr. Philipp Henschel explained, “When we set out in 2006 to survey all the lions of West Africa, the best reports suggested they still survived in 21 protected areas. We surveyed all of them, representing the best remaining lion habitat in West Africa. Our results came as a complete shock; all but a few of the areas we surveyed were basically paper parks, having neither management budgets nor patrol staff, and had lost all their lions and other iconic large mammals.”

The study synthesized available expert opinion and field data to close this knowledge gap, and formulate recommendations for the conservation of West African lions.

"We undertook lion surveys in 13 large (>500 km2) PAs and compiled evidence of lion presence/absence for a further eight PAs. All PAs were situated within Lion Conservation Units, geographical units designated as priority lion areas by wildlife experts at a regional lion conservation workshop in 2005.

Lions were confirmed in only 4 PAs, and our results suggest that only 406 (273–605) lions remain in West Africa, representing <250 mature individuals. Confirmed lion range is estimated at 49,000 km2, or 1.1% of historical range in West Africa. PAs retaining lions were larger than PAs without lions and had significantly higher management budgets. We encourage revision of lion taxonomy, to recognize the genetic distinctiveness of West African lions and highlight their potentially unique conservation value.

Further, we call for listing of the lion as critically endangered in West Africa, under criterion C2a(ii) for populations with <250 mature individuals.

Finally, considering the relative poverty of lion range states in West Africa, we call for urgent mobilization of investment from the international community to assist range states to increase management effectiveness of PAs retaining lions." 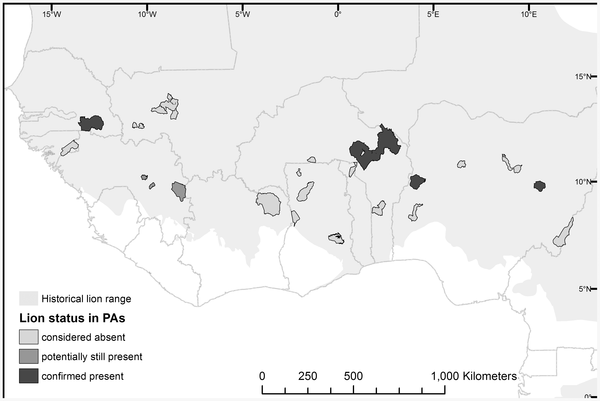 Research article: The Lion in West Africa Is Critically Endangered