"Meteor rates last night were near 20 per hour (ZHR)," reports Bill Cooke of NASA's Meteoroid Environment Office. "The shower could increase in intensity tonight, so we hope observers (especially Europeans) will be alert for meteors."

Space Weather reports that the shower's radiant in Andromeda is high in the sky after sunset for observers in the northern hemisphere. A similar outburst of Andromedids in 2011 was rich in faint meteors. If the 2013 outburst is the same, dark skies will be required to see it.

Andromedid meteoroids come from Comet Biela, which broke apart in the 19th century. Comet Biela or Biela's Comet (official designation: 3D/Biela) was a periodic Jupiter-family comet first recorded in 1772 by Montaigne and Messier and finally identified as periodic in 1826 by Wilhelm von Biela. It was subsequently observed to split in two and has not been seen since 1852. As a result it is currently considered to have been destroyed, although remnants appeared to have survived for some time as a meteor shower.

Featured image (above) shows Comet 3D/Biela in February 1846, soon after it split into two pieces. Image below shows its current position and orbit. 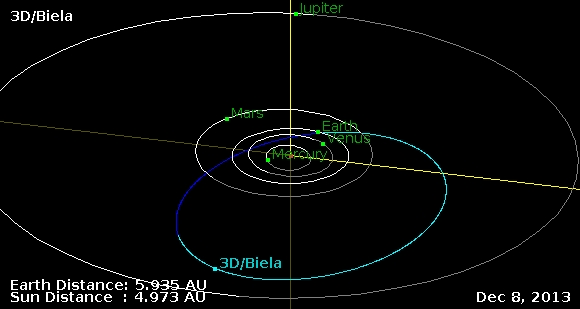