“Predicted population increases in this century can be expected to translate into more people dying from earthquakes. There will be more individual earthquakes with very large death tolls as well as more people dying during earthquakes than ever before“, according to a new study led by U.S. Geological Survey engineering geologist Thomas L. Holzer.

Four catastrophic earthquakes have already struck since the beginning of the 21st century.

M 9.1 earthquake that hit Sumatra/Andaman region on December 26, 2004 was the third largest earthquake in the world since 1900 and is the largest since the 1964 Prince William Sound, Alaska earthquake. In total, 227,898 people were killed or were missing and presumed dead and about 1.7 million people were displaced by the earthquake and subsequent tsunami in 14 countries in South Asia and East Africa. The tsunami caused more casualties than any other in recorded history and was recorded nearly world-wide on tide gauges in the Indian, Pacific and Atlantic Oceans. Seiches were observed in India and the United States. Subsidence and landslides were observed in Sumatra. A mud volcano near Baratang, Andaman Islands became active on December 28 and gas emissions were reported in Arakan, Myanmar.

M 7.6 earthquake hit Pakistan on October 8, 2005. At least 86,000 people killed, more than 69,000 injured and extensive damage in northern Pakistan. The heaviest damage occurred in the Muzaffarabad area, Kashmir where entire villages were destroyed and at Uri where 80 percent of the town was destroyed. At least 32,335 buildings collapsed. 1,350 people were killed and 6,266 injured in India. Liquefaction and sandblows occurred in the western part of the Vale of Kashmir and near Jammu. Landslides and rockfalls also occurred in parts of Himachal Pradesh, India. Seiches were observed in Haryana, Uttar Pradesh and West Bengal, India and in many places in Bangladesh.

M 7.9 earthquake hit Eastern Sichuan, China on May 12, 2008. At least 69,195 people were killed, 374,177 injured and 18,392 missing and presumed dead in the Chengdu-Lixian-Guangyuan area. More than 45.5 million people in 10 provinces and regions were affected. At least 15 million people were evacuated from their homes and more than 5 million were left homeless. An estimated 5.36 million buildings collapsed and more than 21 million buildings were damaged in Sichuan and in parts of Chongqing, Gansu, Hubei, Shaanxi and Yunnan. At least 700 people were buried by a landslide at Qingchuan. Landslides also dammed several rivers, creating 34 barrier lakes which threatened about 700,000 people downstream.

M 7.0 earthquake hit Haiti on January 12, 2010. According to official estimates, 316,000 people killed, 300,000 injured, 1.3 million displaced, 97,294 houses destroyed and 188,383 damaged in the Port-au-Prince area and in much of southern Haiti. Uplift was observed along the coast from Leogane to L’Acul and subsidence was observed along the coast from Grand Trou to Port Royal. 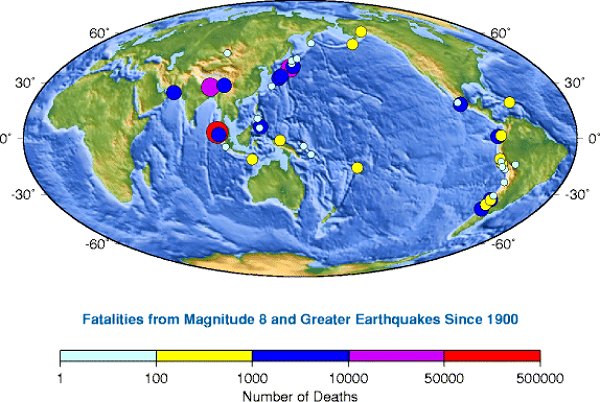 The new study explains this increase in lethal earthquakes.

Experts point that it is not that we are having more earthquakes; it is that more people are living in seismically vulnerable buildings in the world’s earthquake zones. USGS geologists Thomas L. Holzer and James Savage studied earthquakes with death tolls of more than 50,000, which they define as catastrophic, and reported global death tolls from roughly 1500 A.D. to the present. They found that the number of catastrophic earthquakes has increased as population has grown.

After statistically correlating the number of catastrophic earthquakes in each century with world population, they were able to use new (2011) 21st-century population projections by the United Nations to project that approximately 21 catastrophic earthquakes will occur in the 21st century, a tripling of the seven that occurred in the 20th century. They also predict that total deaths in the century could more than double to approximately 3.5 million people if world population grows to 10.1 billion by 2100 from 6.1 billion in 2000.

According to USGS Associate Director for Natural Hazards David Applegate, The National Earthquake Hazard Reduction Program (NEHRP) in the U.S. can be a model for how science can inform engineering designs that are adopted into life-saving building codes in earthquake-prone regions. Holzer’s study underscores the need to build residential and commercial structures that will not collapse and kill people during earthquake shaking.

“Without a significant increase in seismic retrofitting and seismic-resistant construction in earthquake hazard zones at a global scale, the number of catastrophic earthquakes and earthquake fatalities will continue to increase and our predictions are likely to be fulfilled,” Holzer said.